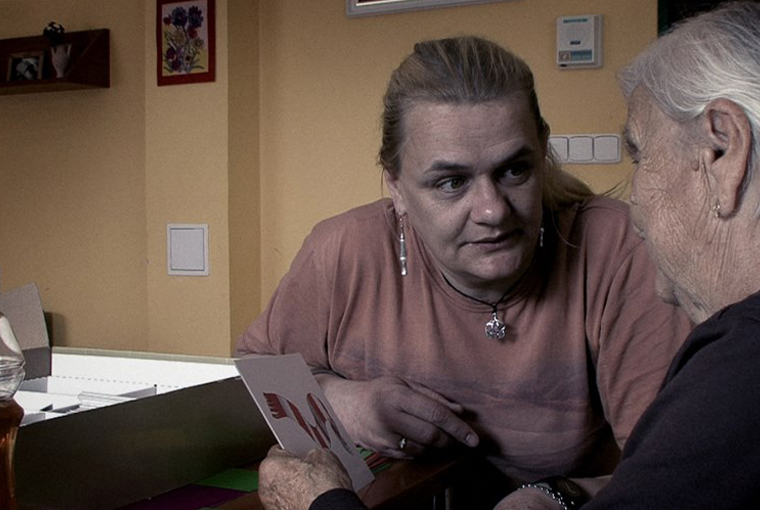 In her documentary feature Katka, which premiered in 2010, Helena Třeštíková documents the life of a drug addict during the course of 14 years. The director met Katka Bradacova in the mid-1990s when her protagonist was nineteen. Having already been addicted for four years, Katka dreams of being clean one day so that she can lead a normal life and have a family. The ensuing one and a half decades are essentially an unremitting demonstration of how her well-intended ambitions mutate into a nightmare. We see her at the mercy of violent boyfriends whose affection for her is driven by keeping her narcotic supply-chain going. Eventually she breaks up with one of them but is compelled to prostitute herself to sustain her addiction. When Katka finally gets pregnant, the news seem like a curse. Haggard and disfigured, she ends up living in quasi-homeless conditions with no prospects of rehabilitation.

Mallory, another portrait of a drug-addict completed in 2015, starts much in the same way. The protagonist in this film also has grand aspirations to lead a drug-free life. Only that this time the plan succeeds. It is certainly not an easy task for Mallory, who has to abide gargantuan emotional frustrations in the form of exploitative boyfriends, subhuman housing conditions and a sadist welfare state (elements that are also present in Katka). But not only does she manage to keep away from drugs, she also finds a way back into society, by finding a job and flat and finally enrolling in an educational program to become a social worker and help people like herself.

It is difficult to imagine more disparate endings to the story of a woman who tries to become clean. What made one fail and the other succeed? Is their struggle with addiction a question of fate? Was Mallory simply at the right place, at the right time? At least part of the film seems to suggest this. Mallory grants much credit to a random encounter with Czech acting legend Jiri Bartoska she had while begging on the Charles Bridge. After a two-hour long conversation, Bartoska managed to talk her into quitting drugs and gave her a generous financial gift. He helped her again when she needed money for her training. By comparison, there are moments in Katka that are ill-fated, to say the least. Would Katka’s situation have changed if she had the luck of meeting a guardian angel?

Perhaps Mallory overstates the importance of the Charles Bridge encounter. Couldn’t her achievement simply be a question of individual strength? Certainly Mallory seems to have a strong psychological disposition to fight her addiction. She is hardheaded and has a sense of irony, two characteristics that help her deal with severe and unexpected twists of fate where Katka may have already reached for the needle. Mallory is able to break up with abusive boyfriends and protect herself from falling into the hands of people who could lure her back into addiction. Katka, on the other hand, appears to be a great deal more fragile and emotionally dependent on people that are clearly unwilling to support her in becoming clean.

Lastly, what if Mallory’s rehabilitation is really a question of conditions that are outside her personal control? Perhaps Mallory’s position in society gave her an advantage over Katka. Although both women live “on the margins”, Mallory seems to have access to a more supportive network of friends. The film constantly depicts people who are willing to help her out. There’s not only Bartoska. An unnamed resident provides her with food when she and her then-boyfriend live out of a car parked in a parking lot. People help them get the dysfunctional car around. Most importantly she gets financial and emotional support when she finds a job in a bar, where guests and colleagues are also willing to listen to her sorrows. Katka’s complete social isolation on the other hand – at one point she lives alone on an abandoned rooftop – doesn’t really provide her with an incentive to quit. She may be unable to break up with abusive boyfriends because, unlike Mallory, she doesn’t seem to have anybody else.

Some of the controversy Helena Třeštíková’s films have sparked throughout the years is due to the fact that she doesn’t give a definite answer to these questions. Kateřina Nechvílová, writing for Literární noviny, thus criticized Třeštíková for making the viewer believe that fighting addiction is a question of fate.1 Other commentators have praised this aspect. In an article for Écran, film scholar Anne-Marie Auger thus states that the fact “that everything is predetermined” makes the filmmaker avoid stories of “extraordinary heroism” (the article was written before Mallory).2 Concerning individualism, in his critique on Mallory for the weekly magazine Respekt, Kamil Fila bemoaned that the film reinforces the impression that everything can be achieved through personal will. The director fails to reveal the “complex social situations” which, according to this author, could have given a much better explanation of her subjects’ plight.3 Other commentators have contested this. A film about an individual doesn’t make that film individualist. Indeed Třeštíková established Film a sociologie (Film and Sociology Foundation) in 1990 which functioned as a venue where filmmakers and sociologists could gather. Her films have thus often been compared to the more macro-sociological documentaries within observational filmmaking, for instance those of Frederick Wiseman.4 In a recent publication by the director, Třeštíková has insisted on the fact that her personal stories should be regarded as “general statements about human life and epochs.”5

Closely related to these questions is the role of the filmmaker. Does she leave everything to fate, to her subjects, or does the fact that she films for such extended periods of time interfere with the development of her subjects? Does her presence create a social relationship where her subjects would otherwise be left alone? Here, too, opinions vary. Some have described Třeštíková’s style as purely observational. They believe that her filmmaking precludes any form of emotional, unintentional or intentional involvement.6 In one extreme example, her filmmaking style has been compared to a surveillance camera. Others have questioned this. Especially interviewers repeatedly dwell on the question of whether Třeštíková had at least some responsibility for Mallory’s rehabilitation and social integration.7 They believe that her “time-collection” technique cannot be considered neutral. The way in which she intervenes in the filmmaking process is certainly unorthodox from the perspective of classical observational filmmaking. Watching Mallory, we know, for instance, that Mallory has the director’s cellphone number, and calls her more than once in the film to share good and bad news. In Katka, Třeštíková briefly intervenes when two policemen kick Roman and Katka out of abandoned railway premises.

Třeštíková’s own statements on this subject are ambiguous. Asked by one film scholar why she didn’t intervene in a scene where Katka’s boyfriend starts insulting a health professional, Třeštíková replies “I am an observer”8. She agrees with the remarks of another interviewer, who praised the fact that she didn’t interfere at all on camera in Katka, adding that the film is about making Katka’s voice heard.9 However, she also admitted that she “really tried to help her”, although it is unclear how.10 With Mallory Třeštíková similarly admits that she helped as she could.11 But the degree to which she provides assistance seems to vary. Reportedly, she keeps a distance when subjects have housing difficulties: “When my subjects have housing problems […], I can’t just let them stay at my place”, she says in another interview, adding that she has to film “in a way that doesn’t destroy me”.12 However, she made an exception for Mallory. Talking to the Slovak journal Pravda, she said: “We tried to find an apartment for her with the reality agency but the deposit was always high. Then, however, she found a job and could find an apartment, which was ideal. And we helped her a little with that.”13

Such methodological caprice makes interpretations of Třeštíková’s films as observational cinema appear misplaced and her own ambition for “uncertainty” shaky.14 Why didn’t she interpret Mallory’s housing problems as too much of a personal burden? It may, of course, be easier to invest personal affection in someone whom one wants to succeed. Just as it is easier to claim impersonal distance for someone whose situation is more hopeless. The fact that Třeštíková pays her subjects makes her intentions even more ambiguous. If Mallory and Katka depend on the filmmaker’s allowance, which has appeared to be the case for both subjects, then they have an incentive to act in ways that sustain this allowance.

It is unambiguously clear for Mallory that Třeštíková wants her to succeed. Would Třeštíková have continued filming her if she had had a serious relapse? Mallory certainly knows whom she’s dealing with, which can be seen in the way she signals shame in front of Třeštíková when things go wrong, and pride when they don’t. Such feelings presuppose a personal relationship with expectations, dependencies, fear, covetousness, love and aversion. This intimacy may explain why so many viewers get the feeling that Třeštíková helped Mallory. Many scenes in the film almost feel therapeutic, enabling Mallory to confide in a person she visibly trusts. For Katka it may be less clear what Třeštíková wants. She may have reasons to believe that Třeštíková wants to understand the effects drugs can have on a person. Considering Katka’s extreme social isolation, it wouldn’t appear unlikely for her to have developed at least some kind of emotional bond with the director as well. But this bond could have simply been defined by her demonstrating the effects drugs can have on a person, if she felt that this was what defined their relationship. Since Třeštíková also believes in the educational purpose of her film, namely that Katka’s story can be a valuable lesson for teenagers to learn what drugs can do to people, the question of whether Katka’s relationship with Třeštíková was sustained through her playing the role in a cautionary tale, is at least worth asking.

The question of whether it is ethical to record other people’s pain is not relevant for Třeštíková’s films since she doesn’t claim to be merely “observing”. If she acted under the requisite of filming like a surveillance camera (provided that this is possible), questions of complicity and wrongdoing could only arise after completion, in the way the film would be used in society. For example, should children be taught that drugs like heroin sealed Katka’s fate? Třeštíková seems to believe this. Perhaps other factors played a more defining role. One could mention the fact that Katka was abused as a child, not to mention her extreme social isolation and ineffective rehabilitation initiatives. But Třeštíková’s doesn’t merely observe. She intervenes. Intervention not only establishes an emotional relationship with her subjects. It is, by definition, also an ethical one. While this could be an interesting approach to filmmaking, Třeštíková’s ambiguous positions towards her subjects make it far from clear that she has fully reflected on the consequences of her method.