On Nurturing Work Ethic... in a Toddler 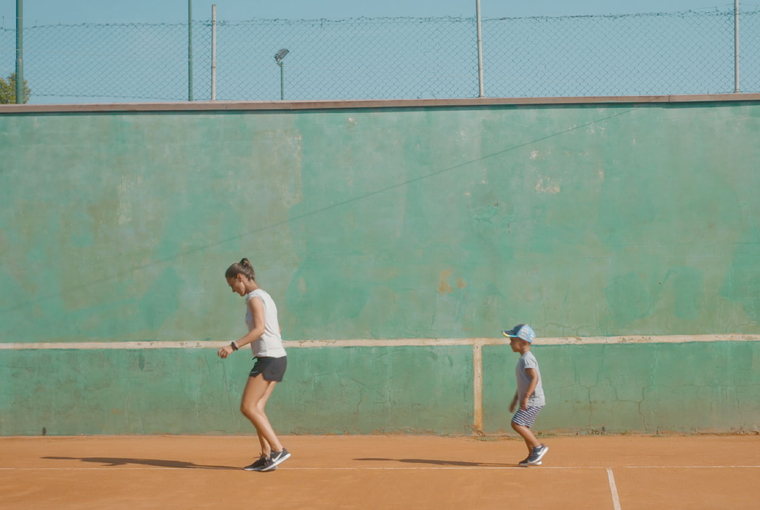 In one of the first scenes of Every Single Minute, Lenka Hanuliak stands at the foot of an outdoor flight of stairs, timing her three-year-old son Miško as he runs up the two-story climb with her husband Michal. They’re preparing him to become the best – at anything. To achieve this, they follow a rigorous parenting method of near-constant athletic and academic training, practically from birth.

Director Erika Hníková’s film follows Miško and his parents in the year leading up to his fourth birthday. During this time, we witness Miško’s training. His father rents an ice rink to give him private ice hockey lessons. His mother instructs him on how to BMX bike in a skate park while intently filming him for his Instagram followers.  Both parents time him as he completes dribbling drills, over and over, and as he struggles to complete pull-ups with his skinny toddler arms. This Slovak couple has sacrificed nearly any opportunity for friends, career, hobbies, or any kind of spare time, to train their child for greatness.

Director Erika Hníková is no stranger to eccentricity and extremes. Her 2010 documentary Matchmaking Mayor follows the kooky inhabitants of a town where the mayor organizes a singles’ mixer to encourage population growth. But her films don’t take the easy road of mocking their unconventional subjects in the style of other, parody-style, documentary media (see Belgian and French TV shows like Striptease or Confessions Intimes). Instead, Hníková directs with a respectful distance and a tacit acceptance of her subjects.

This is evident in the cinematography of Every Single Minute. As she mentions in her interview with EEFB, Hníková purposefully mimics the style of Lenka’s Instagram posts, which feature long stable shots of Miško’s training. The stark cinematography of Every Single Minute also complements the Hanuliaks’ interior design: Lenka and Michal keep grey upholstery and metallic surfaces bare of any color or extraneous possession, and everything is meticulously clean. As Hníková admits, many viewers will see this aesthetic as brutal and unaffectionate, common critiques of the Hanuliaks’ extreme parenting style. But adopting this aesthetic is not a clunky metaphor on Hníková’s part, it’s reflective of the way the Hanuliaks choose to live. Lenka and Michal stand by the film as an accurate portrayal of what they consider to be nothing more than banal, everyday family life.

Certain moments of this documentary feel particularly harsh. When Michal and Lenka throw a fourth birthday party for Miško, they tell him that the party and the gifts were provided because he has trained so hard that year. Shouldn’t a four-year-old get a birthday party regardless of his labor? At the same time, it resonates with a sick adult logic mired in the moralization of capitalist production: I ‘deserve’ a glass of wine after work, my professional achievements determine my self-worth.

In fact, Miško’s childhood is not entirely foreign to my own experience growing up in a wealthy Silicon Valley suburb. Setting up childhood playdates always involved a war-room negotiation of music, language, and sports lessons. Helicopter parenting was a norm. No one believes in individualistic meritocracy like a new money boomer, and if you want your children to have the opportunities you do, you want to set them up well. Of course, piano lessons won’t fix a broken economy, structural oppression, or the simple fact that exceptionalism relies upon the normal. “I’ve never met so many children who are disappointed not to be prodigies,” a Palo Alto therapist once told me.

I certainly don’t intend to conjecture on Miško’s relationship to self-worth, and Hníková’s film does not invite us to. But the film should push us to consider how we value others and ourselves. The Hanuliaks are an extreme example of what author and psychologist Kristin Neff would consider a mindset of self-esteem. Here, self-worth is always precarious because it drops after the short-lived buzz of an achievement and it depends on doing better than others. In contrast, Neff proposes a model of self-compassion, which involves valuing oneself regardless of achievement – the way that most people appreciate the people they love. Likewise, in his self-book Laziness Does Not Exist (2021), social psychologist Devon Price promotes a critical view of the achievement mindset and suggests prioritizing happiness and peace over productivity. Every Single Minute provides a valuable case study for these discussions on worth, achievement, and precarity. Are the Hanuliaks so exotic and compelling because they’re living the natural conclusion of an ideology that is actually quite banal and close to home?