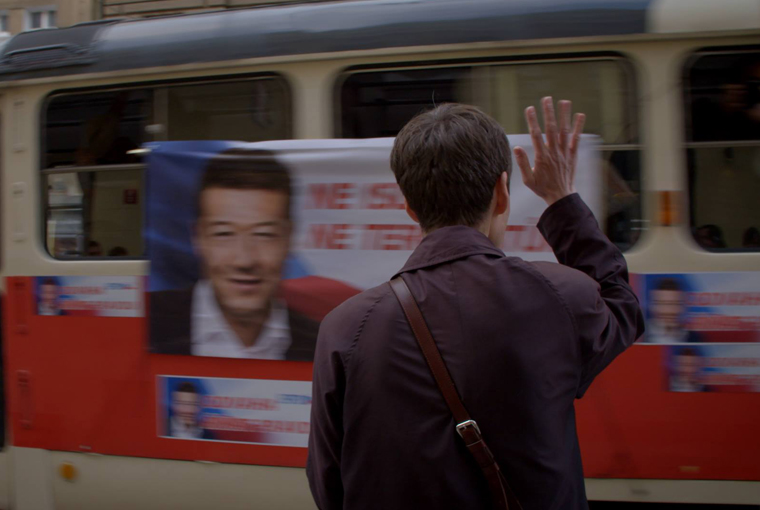 Filip Remunda is infamously known in the Czech Republic for co-directing the Czech Dream in 2004, a mockumentary about the carnivalesque opening of a fake discount supermarket. Since 2013, he has been running the independent television series Czech Journal. For a recent episode of the series, he teamed up once more with his script editor and close collaborator Jan Gogola to direct a “creative documentary” (as stated in the opening credits) called The Okamura Brothers about the far-right politician and entrepreneur Tomio Okamura and his two brothers, Hayato and Osamu. The film breaks with the conventions of standardized TV documentary formats in attempting to provide a wider audience with a less directive and manipulative approach to TV reportage and politics.

The Okamura brothers were raised in Japan and the Czech Republic by their Japanese father and Czech mother. Growing up, the three brothers took very different paths, although two of them got actively involved in politics. Tomio is a prominent businessman and the poster child of the nationalistic and anti-European Freedom and Direct Democracy party (Svoboda a přímá demokracie), which he co-founded in 2015. The party is known for its anti-immigration policies and values. That said, one can’t avoid seeing the irony considering that Tomio’s features would sound the alarm of any “European” trying to define their identity along ethnic boundaries – after all, he is half Japanese and you can tell! Tomio’s brother, Hayato, is a candidate for the conservative, pro-European Christian Democrats. He earns a living as a tour guide for Japanese tourists in Prague, and openly opposes the views and beliefs of his brother. Admittingly pro-European, he dreams of a Czech Republic which follows the German model of economic prosperity and denationalization. Progressive as Hayato might seem in relation to Tomio, he is very religious and both brothers seem miles apart from their younger sibling Osamu. Osamu is involved in politics in a very different way: he is an architect with a particular interest in urban architecture and design and its impact on social interactions and relationships. He is openly gay, but diplomatic when it comes to his brothers’ radically different political views. Filip Remunda introduces the three brothers through a collage of documentary techniques, each brother represented with a distinctive cinematic approach. This mixture of styles is unconventional (at least for TV standards) and reflects Remunda’s lasting obsession with meta-theoretical questions about the media and the power of images.

Tomio refused to be filmed for the documentary, so he is mostly depicted through TV interviews, archival footage from his earlier career (2010 and on), and through the words and views of various supporters, whom Remunda interviews in the streets of Prague during his electoral campaign. In one of this public appearances Tomio reveals how he struggled with his international upbringing and the mixed ethnicity of his family. He says he was bullied as a child for not fully belonging anywhere, not considered Japanese enough for Japan and not Czech enough for the Czech Republic. Tomio’s representation in Okamura Brothers is completely dependent on Remunda’s directorial choices, which fact is accentuated in an early scene in which we see Okamura refusing Remunda’s request to follow him with the camera. We know that if Tomio is to be shown, there has to be another way. The choices made in the editing room let us see Tomio Okamura both as a Trump-like right-wing populist (a cynical TV persona who insults his brother, and states that he would rather belong to a single cultural sphere), but also like a man who’s willing to share his thoughts on politics and his career. On the other hand, one thing is for sure: today’s Tomio does not want to show Remunda his human face. So, whatever the intentions of the director are, we are mostly left with the image of a pretty unpleasant and dangerous public persona.

Hayato, on the other hand, has been more open in collaborating with the director, and so his portrait seems more nuanced, featuring both his personal life and his work as a tour guide. This could be due to the fact that he has a different relationship with his own identity to begin with. It is insinuated that Hayato may not have been troubled with seeming foreign as a child in the same way as Tomio. Remunda follows him during his electoral campaign as he distributes flyers and talks to people in the street – interestingly enough, most of the conversations with strangers revolve around Tomio and the comparison between the two brothers’ political agendas. We enter his house and meet his family. We also see him at work, where he explains its importance to him. At one point, we even see him visiting his dying father in Tokyo. During the whole film, we have general access to his social media comments too. Later in the film, we find out that the two elder brothers have not been talking to each other for quite some time.

Lastly, the youngest brother, Osamu, is mostly depicted during walks through the city, where we see him interact both with the spaces around him and with the people populating them. Via voice-over, he shares some facts about his personal life and his family. We see him visiting his brother Hayato and learn more about his views through a conversation they have around the dinner table. This is the only part where the younger brother tries to help us make sense of the differences his siblings have. He highlights the importance of the existence of different political views in the world as a driving force for people to cease being passive, reflect politically, discuss, antagonize and even confront each other.

Towards the end of the film we see the electoral results (neither Tomio nor Hayato seem to have gained the support they had hoped for), but the film’s real ending is a photograph of the three siblings meeting over the death of their beloved father.  What the viewer is left with is the feeling that differences of political opinion, ethnic and national identity are trite in the face of the more existential challenges of life, such as dying fathers. Although the photo-album aesthetics of this last image are well-intended – a duty to remember what connects us, as humans – it turns into a naïve invitation to forget what divides society today. The divided family is thus less a symbol for Czech society and its political divisions than it is meant as a beacon for reconciliation. Of course, two of the three brothers are not only in a family feud, they also politically represent Czech citizens with opposing views. But why lament over this conflict? Are differences of opinion not essentially democratic processes? In the end the fear of domestic drama and need for harmony, the latter of which is crudely expressed in the paternalism of the dying father, are perhaps more dangerous than political discord, let alone breaking home ties.

How adequately party politics represent our divided societies may yet be another question. With voter turnout slightly above 60%, generalized distrust in democratic institutions and disillusionment with the promises of democratic capitalism, there may be a fourth brother in the Okamura family: that young, apolitical consumer, whose political activism is limited to Instagram and Facebook posts and who could not care less about the EU coming or going as long as his iPhone, vegan coffee and Adidas shoes remain untouchable. The real drama, domestic or national, in today’s societies is not just Tomio-like chauvinist protectionism, but the profound political passivity and lack of critical thinking of the middle-classes who allow dangerous nationalistic or neoliberal agendas to rise and shine through media propaganda, so long as it doesn’t nag at their private comfort. Maybe that fourth brother went astray in Okamura’s family, but he, more than the showy heads of party politics, seems to represent Czech Republic’s happy family.