When the World Looks Black and White 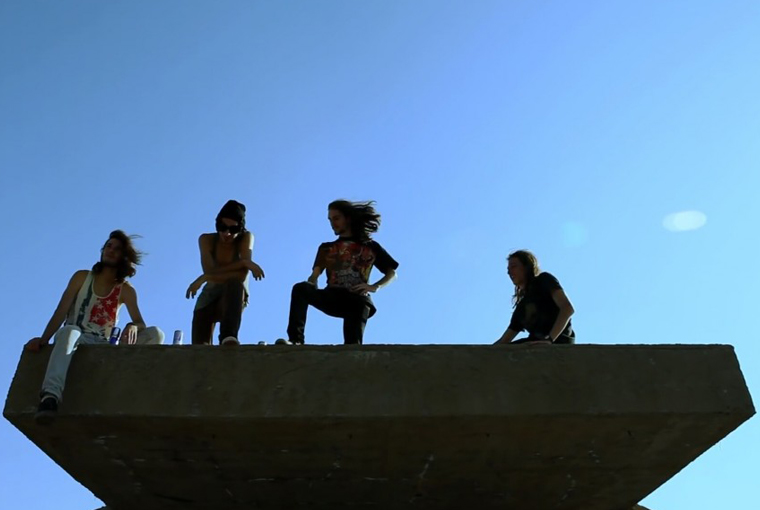 In Imam Hasanov’s Holy Cow, a villager dreams of acquiring a European-bred cow in the hope of blessing his family with a better life. Though the barren mountainscape around Lahic, Azerbaijan, seems like a coarse exile for Western bovines, foreign breeds produce more milk than local cattle – reason enough for Tapdyq to dare the unthinkable. “I will make your life better,” he tells his wife euphorically, well aware of her reluctance to take unnecessary risks. When Tapdyq hangs a cow poster in their living room, she shakes her head; a few days later, a tapestry covers the wall where the poster hangs. Still Tapdyq remains unperturbed. “Your mother covered the poster so that it doesn’t get dusty,” he tells his kids, gradually getting the upper hand.

Not everyone falls for Tapdyq’s elusive charm. When he asks the village elders for advice, Tapdyq is reminded of the local ways and traditions. Speaking from a brittle throne – a wooden bench that hardly seats the four of them -, the elders help themselves with a clumsy analogy: just as religion has stayed pure in the region, they argue, so the local fauna must not be infiltrated by foreign influence. “No foreign animals are allowed in our village,” they warn. Cat or cow, alien brutes could bring in illness and despair. “A woman would be a different matter,” one of the elders adds in a moderating tone.

Tapdyq wants to have none of it. Mistaken for a revolutionary and threatened with expulsion, he shortly wavers only to return with renewed vigor. Soon, we see him borrowing money and cleaning up his barn, and find ourselves rooting for the village progressive. Why indeed should his dreams of acquiring a cow fall prey to old-fashioned superstitions? (The fact that such questions stay unanswered turns out to be the capital flaw of Hasanov’s film.)

Finally, the big day arrives. Tapdyq travels to another city to see a savvy cow merchant – apparently he’s not literally bringing in the cow from Europe – and finds the cow of his dreams. “Madonna,” he calls her in awe, repeating the name over and over as if to convince himself of its suitableness. At home, Tapdyq lures Madonna into the barn and quickly sees his dreams turn into reality. The cow produces gallons of milk and miraculously turns pregnant. Tapdyq’s able to renovate his house, and buys his wife a new pullover with apparent contentment. He even calls in one of the elders to show him that the skeptics have been proven wrong. Strikingly, Madonna herself seems more than happy in the hands of her caring owner, and so does the village, which is inspired by Tapdyq’s sudden success; the film ends on a view of local building sites, and of Madonna’s young calf, which is taken away by a friend of Tapdyq’s. Unfortunately, the ironic turning that is suggested by the film’s promising title and necessitated by its one-sided narrative never takes place: Hasanov’s humorous religious allusions are about hyperbole, not irony.

In fact, Holy Cow wants to make us believe that the scenario of the messianic introduction of a European cow into an Azerbaijani village is not only conceivable, but conform with reality, as the film claims to be a documentary. This formal part is still less believable than Hasanov’s material claims because Holy Cow is too poorly staged to license self-reinterpretations. Though we grow to like Tapdyq who is indeed perfectly likeable, his acting skills and those of his peers are a different matter.

Hasanov’s full-fledged endorsement of Western solutions may partly result from such confusion concerning his ultimate aesthetic goals. Should it be read as a fable, as a fiction film, or perhaps very literally as an observational documentary? If Hasanov had been clear on this, he might have averted much of the film’s awkwardness and outward dogmatism. Still it would have remained problematic even as an observational documentary – though it is true that Azerbaijan’s rural communities, especially those in the highlands, have been plagued by immense poverty, it would be cynical to conclude that these shortcomings stem from traditionalism rather than policy shortcomings or, if you like, from a lack of investment. (Interestingly, many of Hasanov’s peers bemoan a decline of traditional values rather than endorsing it.) Yet ultimately Holy Cow weighs traditionalism against the Western style of life whichever way you read it. And however strong you take its vaguely comical stylistic devices to be intended, the film’s verdict stays the same: we need to embrace the Western way of life, which is both unproblematic and compatible with tradition, save perhaps for the latter’s needless superstition. (Note: try replacing “Western” with “Soviet” and you’ll arrive at the mantra of many a Soviet propaganda film.)

Perhaps, Hasanov’s confidence in the Western way of life is also due to Azerbaijan’s relative lack of it. Though the elders’ tirades against Europe in the first half of the film seem exaggerated and disingenuous – in short, staged -, it is no doubt true that large parts of the country have not yet been introduced to the sweet promise of the Western way of life. Maybe, in ten years there will be a film about its bitter sides, too? Looking north towards Azerbaijan’s neighbor Georgia, which is far more accustomed to the European ways than its neighbor, that scenario looks unlikely. A look at a recent documentary suggests that undifferentiated views about the West are prevalent in Georgia, too: though the synopsis of When the Earth Seems to Be Light makes it sound like the story of a group of subversive teenagers dissatisfied with the promise of modern life, its diagnosis falls back into the same paradigm, suggesting that what we lack is Europe.

The documentary follows a group of teenage skaters and a young artist (Max Machaidze) who’ve found(ed) their alternative subcultures in Tbilisi as ways of dealing with the world around them. The film opens with one of the skaters introducing the members of his group. His hesitant, nasty comments about his friends, whom he describes as weirdoes and assholes, are immediately enticing: attempts to conceal vanity and weaknesses behind tough words become a driving force of the skaters’ portraits, which meditate on concepts like “freedom” and “reality” rather than unfolding a concrete narrative.

The parallel storyline addressing young artist Max Machaidze is less gloomy. A confident young man firmly seated in his creative life, Machaidze teaches us about life and art while tattooing his hands. He reverses the skaters’ anti-attitude into a positive perspective on all things “magical” about Tbilisi, a perspective aided by Machaidze’s safeguarded background. “Do you know anyone else who’s living alone at your age?”, the directors ask. “No, I don’t,” Machaidze responds. In another scene, we see him arguing with his mom about the need of going to school. “I’m a college drop-out,” he proudly declares, silently acknowledging his privilege by living a lighter and tamer version of the skaters’ rebellious attitude.

Interestingly, the local skaters themselves develop a similar dynamic. They are joined by a young Frenchman who likes Georgia because it’s “cool” and because “everyone’s free”. But he doesn’t really appear to hit it off with the local skaters, who describe him as “too soft for Georgia”. Harsh as it may seem, it is obvious why they would say such a thing: the foreigner risks depreciating their plight to a youthful search for identity. They don’t identify with the Parisian because he’s in it for the exoticism and coolness. For them, coolness is just a shell for concealing their true reasons for skating. If skating were only about coolness, it would stop being cool.

Though directors Machaidze, Meskhi and Karumnidze appear to sense something along those lines, they paint their protagonists’ existentialism as a reaction to Georgia’s political reality. Juxtaposing the episodes of the skaters and of Machaidze with those of political rallies, protests and scuffles, they create an abstract image of a country ruled by corrupt politicians and religious authorities. But when asked about Georgia, none of the skaters mentions political realities. What they say when pressed about their worries relates to intolerance and a sense of loss, at most personal problems like having one’s long hair looked at, not social or let alone political issues.

Of course, it’s perfectly natural to be concerned with one’s own problems when growing up, especially so when in a country plagued by poverty and lack of perspective. In this sense, Georgia’s political and social reality is relevant to the skaters’ lives. But crucially, it is not so from their personal perspective, which is nominally what the film is all about: the directing trio’s mistake is to concentrate on causes rather than reasons, which is why their presumed attempt to understand the skaters becomes a paternalistic rehearsal of their own views. Rather than making an effort to understand what the skaters have to say about their motivations for becoming skaters, they use their protagonists’ voices and bodies as a backdrop for saying what caused them to skate. The result is a monologue in dialogic disguise.

Ironically, the directors’ explanations aren’t even very good. If you believe that existentialism originates in (rather than merely being facilitated by) political realities, or that, as Hasanov suggests, traditionalism stands in the way of human prosperity, then you might want to deliberate the position of the other side for one second. Where do political realities come from? What are hawkish traditionalists reacting to? And what kind of political reality could possibly remove either existentialism or traditionalism? The fact that both films are obsessed with painting their respective countries in the worst light possible, reveals that they suffer from an explanatory void which they desperately try to fill. Nothing is solved by escaping reality, nor by simply negating traditionalism.

No cow, however holy, will solve all of our issues. Indeed, it will leave many of the most serious ones untouched.