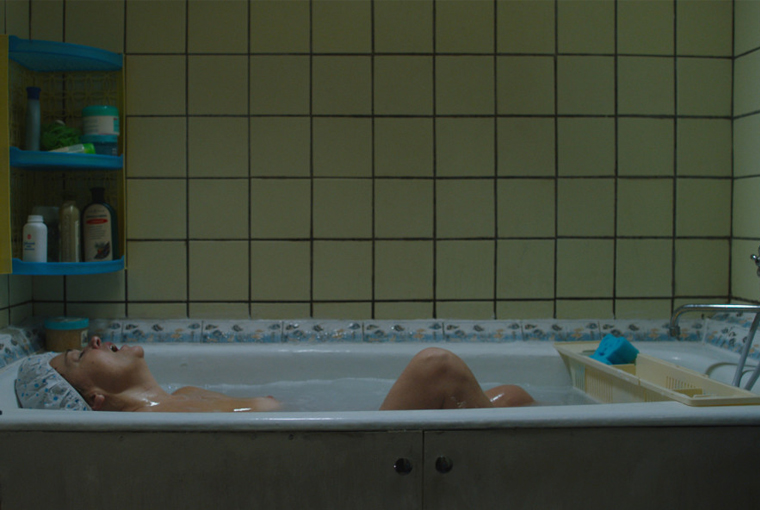 Human beings don’t want to be animals, even though they are. “You’re an animal” Sara says to Manny in the 1985 Kontchalovski film Runaway Train. In A Streetcar Named Desire, Blanche complains to her sister that Stella’s husband “acts like an animal, has an animal’s habits… there’s something sub-human about him”. Those who act like animals are clearly up to no good – especially in films.

In this new feature by Russian helmer Ivan Tverdvosky, the protagonist Natasha gets just a little bit closer to the animal race by growing a tail. Natasha’s tail helps her learn more about herself – she grows in confidence along with it. Paradoxically, her tail helps her discover the freedom of fitting into mainstream society. She dances around and buys nice new underwear and dresses. There is something phallic in the tail, partly visually – it looks not unlike a male member -, and partly symbolically – having a tail gives her confidence and sex appeal. But one of the film’s strengths is the way that these connotations are sidestepped, and then strangely collide, leaving us with vague feelings of distaste but also of fascination.

The trope of taking a supernatural element and inserting it into an otherwise normal setting often features anatomical distortions. At worst it appears as little more than a gag, trying too hard for the metaphorical – like in the 2014 film Viktoria by Maya Vitkova, in which the protagonists’ being born sans umbilicus comes to represent a world in which women don’t have to go through the perils of childbirth (due to the glories of communism). Thus the visual (a buttonless belly) comes to represent an ideal, both positively – as communism, freedom, cleanliness – and negatively – as a lack of connection. Here however, the technique is used rather differently. The tail comes to represent the freedom of non-conformity in a repressed and religious Russia, but it’s also a celebratory extension of our animal nature. Although to some extent the tail is a macguffin, Zoology stays with us in a way that Vitkova’s film does not.

We never find out exactly why or how Natasha grows a tail. The appendix is treated as unnatural but unsurprising in the context of the film – a modern urban environment. Perhaps it has something to do with her providing food for the zoo she works at; perhaps it’s her body’s way of rebelling against her passivity. Natasha’s unhappiness is shown in her shuffling gait at the beginning of the film. She’s vehemently repressed by her family and work colleagues, and her small pleasures in life are curtailed by a need for secrecy. Although already middle-aged, she hides her smoking from her mother and only dances around her room singing when she is out. The camera uncovers these moments with an understanding eye.

As the film progresses, the weight of the world seems to be carried on our protagonist’s shoulders – only the devil knows how, and against what, she is rebelling. After a few visits to the hospital, rumors start circulating about an evil woman. We can relate to her the most when she gets a naughty thrill out of encouraging the gossips and starts explaining how the tailed-woman has even scarier endowments…

Natasha is a stunning creature. She is childless and utterly alone. However, the film does not always elicit our sympathy: it is mostly observational. The camera follows her being followed by her mysterious tail, and the viewer hurries along behind. We’re alternately moved by her bravery when facing the hospital doctors and annoyed by her cowardice when she is faced with bullying workmates and family. In scenes of cataclysmic loneliness, she walks through the dismal streets of her hometown with her tail dragging behind her. DoP Alexander Mikeladze chose to frame this series of scenes by mid-shots which focus on the bottom part of characters.

Tverdovsky stated in an interview that “animals live in an environment without any politics, without any presidents, without any borders.” Isn’t this zoological utopianism? One can’t help wondering if there are any ants or rats in Russia. Of course, one can’t discuss Zoology without mentioning Lanthimos’ 2015 masterpiece The Lobster, in which characters must couple up or turn into animals. In both films, the animal world is portrayed as a punishment, and characters will do almost anything to keep from becoming part of it. As in The Lobster, the film’s ending contains a violent act of self-mutilation as the characters attempt to stay human in contour by blocking the physical change of species. Natasha, making the connection, goes to feed the apes and lamas at the zoo. The speciesist rejection of the animal world as separate from ours reminds us that our animal nature can’t be escaped.

« Previous post
Salomé Jashi on The Dazzling Light of Sunset
Next post »
Vitaly Mansky’s Under the Sun (V luchakh solnca, 2015)