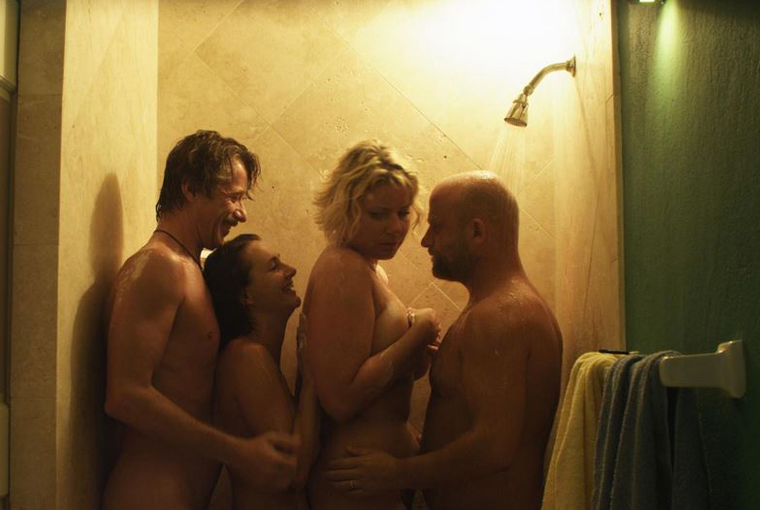 Jan Hřebejk’s The Holy Quaternity is a Czech film based on an original script by Michal Viewegh, the author of the bestselling book with the same title. There have been adaptations of Viewegh’s books before, but this is the first time for him to work as a script writer. The idea for The Holy Quaternity came to life after a long conversation between the author and the director in a pub. The result is a funny, but shocking comedy ready to disturb married couples.

The story of the film revolves around two couples, both married for over 20 years. They have been friends for a long time, and live next door with their front gardens connected. Vitek (Jiri Langmajer) and Marie (Marie Prochazkova) have two daughters, and Ondra (Hynek Cermak) and Dita (Viktorie Cermakova) have two sons, all of whom are adolescents and about to have their first sexual experiences. The two married couples, on the contrary, both suffer from very boring sex lives. When the two men, who work together in an electricity company, are asked to go to an island in the Caribbean sea to restore electricity after a hurricane, their wives propose to accompany them, transforming the trip into an exotic vacation. Under the sun, the couples start thinking about spicing up their sexual lives by exchanging sexual partners. Marie’s religious beliefs make her the only one hesitant to participate in this daring foursome. But finally, she gives in to the triggering sexual mingle…

The Holy Quaternity is mostly interesting in terms of challenging certain taboos in cinema – vulgar dialogues, nude acting performances, daring sex scenes (e.g. showing both couples in the shower) – within a religious context. Examples of this are the title of the film that refers to the holy Trinity; Marie’s hesitation regarding the sexual adventure because of her strong attachment to religion; various scenes in a church where one of the young daughters sings in a choir; the little statues of the holy family “doubled” as Christmas decorations in the couple’s houses, etc. The director succeeds in letting the character’s sexual behavior appear more or less normal in contrast to these religious allusions.

But sometimes the film questions the viewers’ morals in dubious ways, risking the characters to collapse into fools, and the story into nonsense. Certain moments in the film are clearly over the top. For example, the couple’s breaking of taboos seems to have no real consequences in their everyday lives. When the kids and the grand parents discover the truth about the couples’ second sexual partners, no-one is really shocked by it. Not only is this unrealistic, it also trivializes the conflict of the characters.

The exotic scenes, along with the music and the overall lightheartedness of the story make the film fun to watch, leaving a few things to think upon on the back of our heads. But the more silly scenes do not encourage viewers to take anything that is going on in the film more seriously. The subject could have still be treated earnestly without cutting short on the comical aspects.