Even Dogs Suffer under the Memory of Socialism 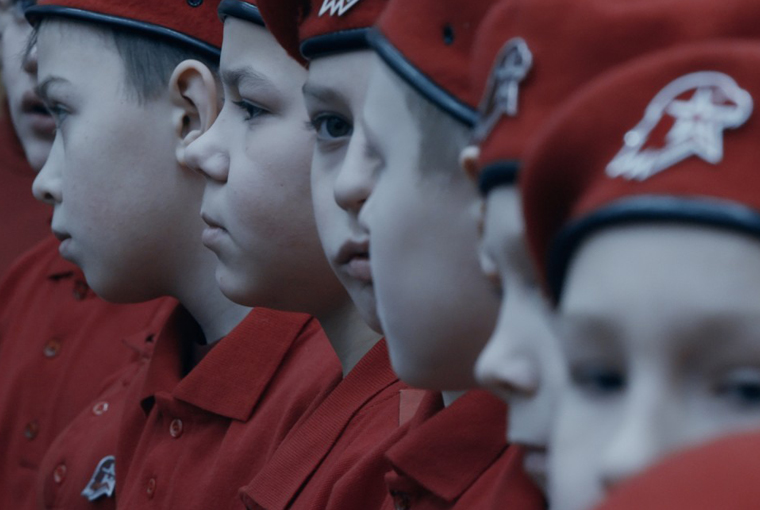 Halfway through Ksenia Okhapkina’s Immortal, a shivering dog in the middle of a snow-clad railway track, his fur covered in white flakes and wearing a lamentable look on his face, barks into the night for what is a good two or three minutes in a scene that is otherwise disconnected from the rest of the film. The metaphor was not lost on all those present to watch Okhapkina’s observational if poetic documentary at this year’s overcrowded Sarajevo film festival. Not lost because Okhapkina incessantly rammed into the heads of her audience that the specter of Communism hailed as revolutionary by Marx a century and a half ago, is still haunting the desolate landscapes of the faraway Russian Arctic, and by extension, post-Socialist Russian society at large. Will Russia ever escape the clutches of a renewed totalitarian future that is clearly here to stay, the director asks?

Having previously gained access to a remote location in an unnamed industrial town in the North of what Solzhenitsyn titled the “gulag archipelago,” Okhapina focuses her camera on two groups of middle-schoolers (boys and girls respectively) who were filmed over a short period of time while involved in a series of afterschool activities. The message is made ostentatiously clear. We are exposed to the army-like routines that Russian boys are involved in under the leadership of an overzealous instructor (ranging from air-gun shooting to marching in uniform), and to the meticulous ballet classes which the girls are forced (we imagine) to take under the command of their equally strict female instructor. These images attempt to shed a much-needed light on the dangerously indoctrinating activities that the Russian youth undergo for the benefit of (we imagine, again) the nationalistic Russian leadership that encourages such an education. While the message is undoubtedly bleak, and the propaganda of the Russian government comes across as nothing but hair-raising, Okhapina’s filmmaking style is as propagandistic as the very propaganda she is trying to contest. Indeed, one wonders what difference there is between the erstwhile agitprop work of such film directors as Sergei Eisenstein or Esfir Shub and the pale copy of Ksenia Okhapkina.

The film starts on a promising note. Shots of half-ruined industrial structures left standing from the time of Joseph Stalin succeed at a meditative pace, creating a reflexive atmosphere that betrays a mature cinematic eye. Furthermore, the appropriately contemplative music completes the director’s cinematic probing into an environment few of us will probably have the opportunity to visit, and in that, the premise of the film stands strong and temptingly inviting. However, Okhapina’s subsequent scenes add nothing more to that premise. By alternating ever more shots of the boys of the youth military group at work and the verbally abusive instructor showing off his impersonations of the drill sergeant in Full Metal Jacket, we get nothing more than a collection of clichéd vignettes that drive their message home through repetition.

The same can be said of the girls practicing ballet. While the director’s tacit commentary of the separation between the groups according to clichéd gender conventions is clear and pertinent, by offering us yet another shot of the ballet instructor (sporting a T-shirt with the words “Optimism as a Lifestyle” printed over her chest), Okhapkina merely lets on that her documentary lacks substance, and uses instead a succession of images to sway audiences to her point of view.

Even though the recurrent shots of train cars loaded with minerals from the frozen North are interspersed with the above-named scenes to offer the audience some breathing space, what obtains is a merely repetitious crescendo that ultimately doesn’t deliver. Indeed, Okhapkina’s film is so obsessed with passing its didactic message on to audiences that we are made to wonder how many clichés can be packed into a 60-minute film.

What’s more is that Immortal comes very well recommended. Earlier this year it won the documentary prize at the prestigious Karlovy Vary film festival. The press, likewise, praised the film unreservedly for revealing the dystopian society which is today’s Russia under the dictatorial hand of a regime which, given the darkness of the Arctic winter in which the film was shot, can’t help but reference the oft-quoted Big Brother of Orwellian fame casting a giant shadow over the lives of innocent subjects unable to escape the crushing fist of ideology.

But it is just because the film hits us over the head so methodically with its pre-packaged thesis that suspecting audiences can’t help but wonder whether the film is indeed about Russian society or about the projections of an ex-citizen over everything that her eye meets in the bleak landscape she revisits. Isolating her child protagonists in the silent background as if they were marionettes in the hands of sadistic puppeteers, her characters (teachers and students alike) appear as cardboard-shaped figurines that Okhapina, through the employment of montage, manipulates at will. There is not one genuine portrait in the film, not the slightest intention to come close to understanding the allegedly brainwashed subjects that her camera, swaying as dictatorially as the hand of the regime, condemns to silence and anonymity. And if that is motivated by the documentary’s self-professed observational, fly-on-the-wall style, it is obvious that Okhapina doesn’t feel the slightest curiosity for getting to know her characters. Finally, in the case of the instructors, who are captured shoveling snow while spewing nationalistic verbiage in apparent response to unheard questions we assume they have been asked, what comes across is the director’s straightforward contempt for her characters.

And if the succession of indoctrinating after-school activities didn’t end up convincing quite everyone of just how dreadful Russia is, Okhapina delivers a crushing punch in her final scene. If the entire film has been placed on the training grounds and the practice rooms of the school up to the end, in lieu of a denouement, Okhapina brings her camera to a different place. First the director focuses on the ghostly shapes of a cemetery in which the Soviet heroes invoked by the military instructors earlier in the film presumably lie. Again, as if this silent metaphor was not enough to seal the fate of a war-prone Russia in one expressive shot, Okhapina unsubtly pans from the cemetery to a building which is revealed to be a nursery. In this otherwise extremely cozy and quiet space which reveals a not exactly low standard of living or public investiture, a few well-fed babies with smiling faces peek at each other from under the covers of their individual beds. They don’t know what awaits them out there, but we, the now enlightened audience members, do. The ending feels therefore like beating a dead horse. There should be no doubt in anyone’s mind that Russia’s current and next generations are forever marked with the dreadful stamp of Communism from which there is no escape but in the sweet liberation of death.

Unfortunately, Okhapkina’s film is not an observational documentary; it is a simplistic exercise in montage, a reiteration on extended scale of a Kuleshov experiment passed as a thoughtful commentary on the future of a civilization. And what is even sadder is that, given the film’s reception at Karlovy Vary and its selection at Sarajevo, today’s film experts prove, by unreservedly embracing this simplistic message as some thoughtful form of activism, that they condone a type of mediocrity which will continue to thrive. Meanwhile, veritable societal critiques in contemporary documentary filmmaking will remain either wishful thinking, or irrecoverable nostalgia.