People’s Palace or Whither Socialist Memory? 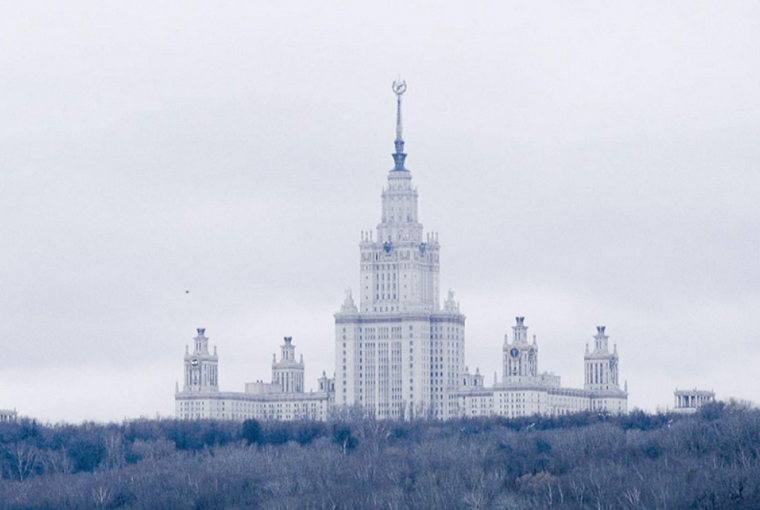 Though released in 2018, it’s as if Bulgarian documentary duo Georgi Bogdanov and Boris Missirkov’s latest film was made to mark the thirty years that have elapsed since the downfall of Communism. In that sense, Palace of the People stands out from a recent wave of filmmaking condemning the heritage of Socialism in the former “Eastern bloc.” Approaching the subject of Socialist memory through what is indisputably one of its most tangible legacies, the two Bulgarians’ work is centered around the monumental “palaces”, that is seats of government built by various leaders in Eastern Europe and Russia to allegedly benefit the working class. Or, as the filmmakers sarcastically put it in their own blurb about the film, “to remind the people there was an ultimate power and brighter future.”1 Without ever revealing unknown information on either architecture or memory, the film crew travels to no less than five countries in which they seem interested in exploring the ramifications of one overarching question: what became of the palaces built by these countries’ leaders before Socialism fell into disrepute in the East? Implicitly, they also raise the question how the current leaderships of these countries deal with their unresolved past made material by these “architectural monsters”.

The answers are predictable, if revealing. What comes through invariably in lieu of a conclusion is a sense for the sometimes regretful, sometimes unwavering commitment of Eastern European countries to overcome what many of them still consider their shameful past. And this is a mutually shared feeling between Bulgaria and Serbia on the one hand, and the former German Democratic Republic and Romania, on the other. The exception, predictably, is Russia. There are therefore two principal lines of thought along which I will be reading the film. First, the unmitigated Eastern European desire to belong (or continue the transition) to the West while sometimes repressing a Socialist past in favor of an elusive capitalist future. Second, Russia’s peculiar if by now clichéd penchant to go at it alone while walking the thin line between remembrance and tabooization of the past.

The film begins in Belgrade, the former capital of Yugoslavia (and now of Serbia), taking us straight inside the former Palace of the Federation, which is still being used as a political headquarter (although it is called “Palace of Serbia” today). The directors insist that the building’s former grandeur is for the most part intact, as is most of the furniture and the murals and decorations adorning the walls. Even though the interior seems to come from an age which has outlived the building’s purpose, what we perceive in most of the interviewees’ answers is a pervading sense of nostalgia. Not only nostalgia for the times when the building used to house the meetings of the Non-Aligned Movement in 1961, but nostalgia for the entire period of Socialism. Indeed, what the directors capture in their portrayal of their Serbian subjects is something of a split society; split, that is, between two factions, which, we imagine, are only too determined to push their own agenda. One willing to remember and memorialize Communism, the other, personified by the country’s contested liberal governance, eager to forget, and quickly align the country’s policies to match the ones of the European Union. Given the overall ironic tone of the directorial premise, the Serbian section suggests that the nostalgics are increasingly seen as a quirky remnant of a past embodied by the cement structures of such buildings as the former Palace of the Federation.

A similar feeling pervades Bulgaria’s treatment of the past. The local construction, finished in 1981 and only used for one decade before the collapse of the regime, was subsequently mismanaged and put on the back burner for most of the nineties, before being renovated and restored to some of its former glory during the building’s mid-teens. While its name remained the National Palace of Culture, its shares were distributed among several companies that took over the site. What stays with the audience from the Bulgarian section is the portrayal of a group of electrically-powered clocks that are still being serviced by a team of professionals hailing from the Socialist age. Besides symbolizing the importance of time in the process of both remembering and forgetting, the focus on the clocks provides a tangible remnant of Socialism that, through the electro-mechanic character of the objects, puts a lively spin on the entire building. Indeed, as prone to “move on” as the Bulgarians come across in the short series of interviews with the service staff (a cleaning woman proudly submits that she has been working the same job since 1986), the Palace of Culture seems to have found a neoliberal-era purpose that its Serbian counterpart seems still to be lacking.

If we ignore the rather pretentious intertitles that separate each segment from one another, the country-specific vignettes go well together. However, these vignettes do not automatically bring along the coveted philosophical angle the directors might have sought out. Be that as it may, in the case of the segment on the former East German Republic, one feels that the break instituted by the intertitles is indeed necessary.

The Palace of the Republic that once stood on the Alexanderplatz in Berlin has literally been erased from the face of the earth. The construction was replaced by a smooth lawn until the purpose of the newly created space was rerouted in favor of another architectural project. The old palace housed the GDR parliament, but since the memorialization of this historical fact became impossible due to the effacement of the space, relics such as teaspoons and china cups continue to show up in some of the area’s souvenir shops. The fate of the Eastern German republic’s symbolic structure bespeaks of the smooth incorporation of one system into another. While West Germans temporarily gave up their alleged high economic status to accommodate their poorer brothers, East Germans were not allowed to retain a mark of their past. In that sense, forgetting attains in Germany its uppermost character, becoming downright amnesia; a self-induced amnesia expected to heal the traumas of Socialism by pretending that the past never existed.

An interesting twist in the resignification of the past takes place in Romania, the most spectacular of all sites visited by the film crew. In the country where, according to an old Radio Yerevan joke, everything, however incredulous, ultimately turns out to be true, the building constructed by the Communists attains looming proportions, today ranking second-largest after the Pentagon. This megalomaniacal architectural project formerly known as “The House of the People” and now called “The Palace of Parliament” reveals something that the other sites in focus do not. While Nicolae Ceausescu was undoubtedly driven by delusions of grandeur, the project he ultimately finished did not only receive a very practical function in post-Communist Romania. It also showed how the country hypocritically chose to deal with its own past: supposedly rejecting everything that had to do with Communist ideology and reviling the memory of Ceausescu’s personality cult, it carried over a substantial chunk of the Socialist period into post-Socialism, that is, a largely functioning (if old) infrastructure, residential housing for half of the country’s residents, and of course, the Palace of the People that now houses the parliament. Indeed, the film directors capture this very idea in a line spurted out by a tacky newly-wed couple who photograph themselves in front of the “architectural monster”. Coming fresh from a photo ride in their newly acquired red Porsche, the bride, a symbol of the violent turn that liberalism took in Romania after the transition, quips in all honesty that she too would like to accumulate riches in the style of the country’s reviled leader whose legacy now stands behind her. This only shows, as in the Yugoslav case, the split that characterizes Romanian society, burdened here with a heavy measure of hypocrisy: while Communism gets blamed for almost everything that goes wrong in the country, the achievements of Communism become sites of emulation from a populace enamored of a rags-to-riches story they go out of their way to personify.

Even though Bogdanov and Missirkov start their film with the Russian segment, I leave it for the end here because it contrasts sharply with the others, and therefore deserves a place of its own in this discussion. The reason this is so, is that the Russians—at least those interviewed in the Bulgarian doc—do not seem to contest the heritage of Socialism in any way whatsoever. Lomonosov University, built in 1953 and standing—according to Igor Aksyuta2—tallest in all of Europe until 1990, when the Messeturm was built in Frankfurt, walks a fine line between propaganda and truth. If the directors use an advertising film from the 1950s that sings the praises of Stalin’s project, purportedly in contrast with today’s reality, their goal is somewhat contradicted by the rather peaceful atmosphere exuding from Moscow University today. Using a similar model in their B-roll as the one used in the promotional film of the 50s, the directors are either unable to escape the clutches of propaganda itself when approaching such a monumental architectural project, or their sense of irony is definitely lost on audiences. Whatever the case, the Russian “story” does not come across as risible, and neither does Stalin’s maniacal pursuit. What obtains is a sense of continuity between the age of Socialism and that of neoliberalism, a continuity which in Russia comes across as more “normal”, that is, more in line with a ruptureless transition, than it does in other parts of Eastern and Central Europe. Indeed, intentionally or not, the film paints Russia as one of the least schizoid societies of post-Socialism. And the “palace” in focus here does its share to promote that sense of normalcy at least as much as it did in the propagandist film of the 50s. If there is a difference between propaganda and reality insofar as Lomonosov in particular and Russia at large are concerned, this does not come across in the film.

Overall, what irks the rather bemused audience of this documentary is the directors’ inclination to camouflage their own stance. If the blurbs and posters for the film read bloody murder, inviting us to condemn the Socialist past across the Eastern European board, the film does not live up to the directors’ call for condemnation. In fact, the doc meanders hesitantly between the five countries, leaving the big questions practically unanswered. Why have the filmmakers embarked on this project? Were they deterred from their initial goal, and did they ultimately learn something they did not know in the beginning, and if so, what was that? And what motivated the directorial team’s biased approach toward the past in the first place?

What the filmmakers fail to explore is their own position, as Bulgarians and as filmmakers, vis-à-vis their past and their identity. As such, Palace of the People never leaves the aesthetic territory of a simple History Channel documentary, as hard as the directors try to put a reflective spin on it and pretentious intertitles notwithstanding. What the directors can learn from the experience is, of course, that being honest about your intentions—revealing the authorial position—moves a creative product in a direction where a half-hidden agenda can hardly ever take you.