Hole In the Mirror 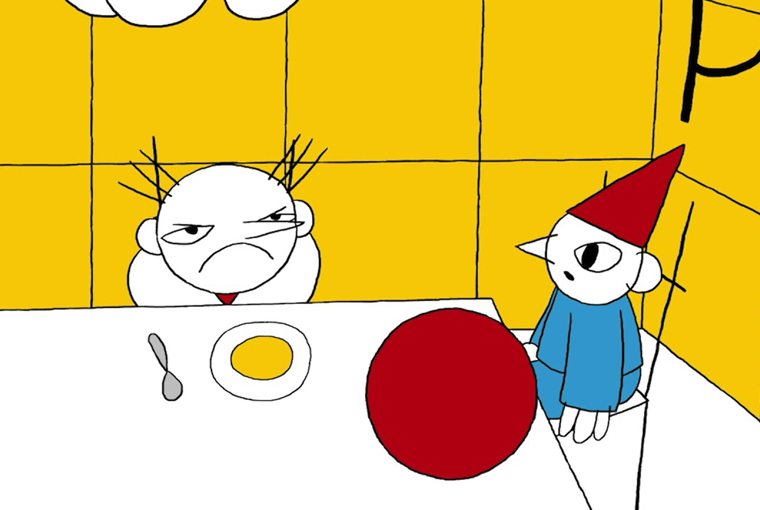 Liana Makaryan is a Moscow-based animation director who studied at VGIK. Running After Wall (2019) is her second animated short film, having made one before (Parable of the Blind, 2018) and one after (Sugar Show, 2021). Running After Wall tells the story of a father-child relationship in a dreamscape, where this kind of relationship is not only ever-recurring but also constitutive of the space itself. If a child dreams about its father, the father also constructs its ways of dreaming.

This last thesis is what, in my view, is made evident in Makaryan’s film. First, the general “naïve” style of the film accentuates the point of view of the child’s imaginary: Running After Wall is a good example of a “style that is the man himself” (Buffon). Also, no form could be better suited for this task than animation, which allows the filmmaker to reproduce the child’s way of “doodling” its life by showing a world that is fully made up of a piece of paper and three colored pens: red, blue, and yellow.

Red stands for the father. Or rather – red marks the father figure by marking, first, the real father – his red tie – and then also something that doesn’t belong to him, something elusive that keeps changing shapes and haunts the father himself – an object represented by a red ball.

Blue stands for the child. Or rather – for the place or places it occupies (those may be several at a time), the body organizing the imaginary space.

Suddenly the father says “No!”, the child loses what it had to offer and starts fighting to get it back. The red ball that, like the father figure, fitted in the child’s previous picture of the world, literally falls through it, creating a hole, a want in it – and opening a door to new kinds of connections that will constitute the child’s subjectivity.

Everything gets mixed up. A red car with yellow wheels appears: the car is associated with the father, but it is also the father’s toy, and toys are for children. Chasing his father, the child puts on a red hat that becomes a red head: but its desired wholeness also turns out to be lacking, as it lacks a mouth. The ball-head scene makes a significant point: the red ball is indeed an organ, but an organ that has to be separated, and can’t be put back to where it belonged, because the place itself – the new (symbolic) life of the subject – is constituted by its very lack.

There’s a story by Milorad Pavić called The Mirror with a Hole, where a hero goes to a market and meets a girl who’s selling a mirror with a hole. And the hero says: “Your mirror is defective. There’s a hole in it.” “That’s its most precious part,” says the girl.

Makaryan’s film is a concise and inventive reflection about this constitutive lack, this desired object – the red ball – that has to be kept at a distance so as not to become a wall between father and child; it is this hole in the mirror that, while destroying the wholeness of the picture of self, opens a door to one’s desire.

The last thing to note is the great use of music composed by Lusia Kazaryan-Topchyan. The dissonant brass echoes through the vast gridded space, turning it into some kind of inverted circus – another dream-like place that haunts children’s imagination as a place where strong fantasies and deep fears meet. Ambient sounds of the other parts remind us of a similar rendering of the motives of “entering fantasy” in animation works like The Heat of a Thousand Suns by Pierre Kast and Chris Marker.