Learning to Coexist by Studying Your “Species” 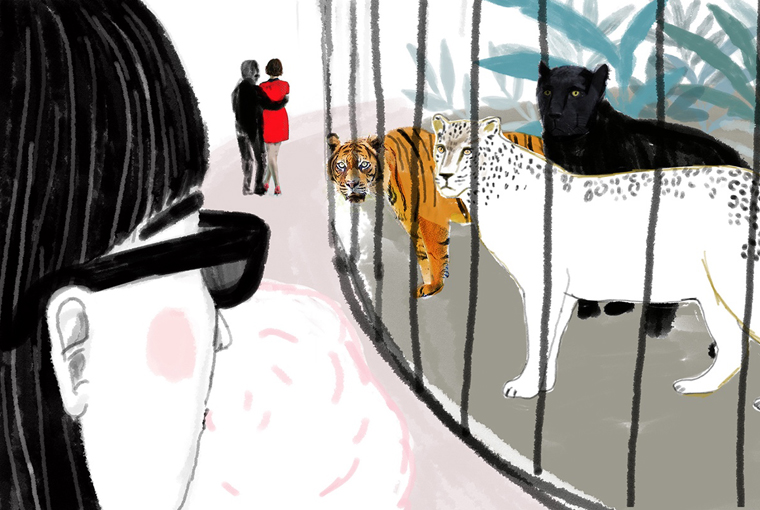 Symbiosis” literally means to live with someone. For the director of an eponymous short featured at this year’s Primanima festival, it illustrates either the condition of a couple tolerating their living together, or the state where two beings of the same species (in this case, the species under investigation is “women”), try to coexist. Nadja Andrasev’s Symbiosis is a 10-minute 2D animation film that resorts to pixilation and collage. It is Andrasev’s first film and was competing with others at the latest Primanima festival in Budaörs, Hungary, a festival laying its focus on debut works of young animators but also on real time issues, among which modern love still appears to rank high in Western societies. Symbiosis’ protagonist is a young woman who lives in a modern city. In the first scenes we get a glance of her daily routine. She lives in a big apartment with a great view of the city and plenty of plants and does some sports. Nevertheless, this superficially “common woman” is a bit strange: when frequenting the swimming pool, she prefers observing others over swimming. What strikes us is not so much the object of her observation, the other female bodies, but her bizarre, poker face look: it is difficult to say whether she looks at them with envy, fear or desire. Her strange behavior intensifies when a mosquito bites her and, rather than reacting, she lets it bite her as if it wasn’t her own body that was being attacked. With the same strangeness with which she observes others, she also observes herself.

This female lonely observer lives with a male partner. Her man returns home, bringing her food, and as he leans over towards her, the hair of another woman falls to the ground. The protagonist does not address the issue directly, but picks the hair up and sticks it into her anthology book. At this point we find out that another part of her daily routine is finding out about the affairs of her partner, who is constantly cheating on her. The protagonist reacts to this fact by observing, and gradually by investigating. Her partner doesn’t even try to hide the fallen hair, or the scratches on his back. She then begins practicing some master stalking, following her partner and the women around, a fact that can potentially make her character less sympathetic. Of course, she also does some digital stalking by seeking out the other women’s Facebook profiles.

Still her behavior does not come off as a scheme because she does not appear to pursue any specific goals. She doesn’t have a plan, observation seems to be her only intent, which gradually becomes a pattern of her everyday life. In the director’s words, the woman is a collector who studies the samples of other women. Surely, she still must wish to “win him back” in some way, as is shown in the bathroom scene when she follows her partner in the shower to arouse him. But her partner rejects her, and the film slowly reveals that the more he rejects her, the more she gets closer to the other women. Collecting their samples turns out to represent her struggle to understand something that’s slipping her knowledge and furthermore ours. Is she trying to understand what makes them special to him? Or is she, after all, delving into herself, trying to understand why this investigation has become so important to her, almost like a daily ritual?

One of the most interesting elements of the film is the frequent appearance of other animal species and their parallelization with women. The mosquito in the swimming pool reappears in the protagonist’s glass of water, where it slowly drowns. And the film introduces more animals that look more or less trapped. A maze of birds flying towards the horizon like they were trying to break free from a crystal ball, flamingos beatifying an urban park, seals and leopards being intimidating at a zoo, and night butterflies stuck in the apartment’s glass observing the two partners sitting on their couch far from each other. Andrasev insists on introducing a multitude of animal species and one gets the feeling that the protagonist identifies herself or the other women with them. What is certain is that the animals need to participate in the study of a condition that seems to go beyond one specific animal species. The different species and their samples mix: when she observes the leopards at the zoo – and they look back at her -, the protagonist wears a jacket with a leopard pattern and you can’t tell who is really under threat. Therefore, the parallelism becomes more and more an equation.

Symbiosis also illustrates the greediness that characterizes modern sexual desire without being moralizing about this fact: a city is presented as a market with a range of desires which is constantly being renewed and thus never-ending. Meanwhile the film also offers an insightful portrayal of modern relationships in Western society. As capitalism and consumption’s union is unbreakable, not only the products are disposable but also the consumers themselves. In many cases, romantic relationships have been transformed into a sexual market. Certainly when it comes to sex, women are supposed to fulfill their role as products better than men, which can lead them to believe that they have to answer a moral dilemma: will they take part in the sexual market, or will they try to distance themselves from it? Will they get into the game, compete with each other to gain their sexual points, or will they resign from it, searching for ways to peacefully coexist? The protagonist seems to struggle to navigate those questions and find her proper position: her stalking or the fact that she doesn’t seem to plan leaving her partner, make us suspicious about her inner motifs, but the fact that she never undermines the other women nor even distances herself from them, reveals that her aim is simply symbiosis within her “species”, that is with other women. The approach of Andrasev is powerful and, most importantly, honest. She neither humiliates nor glorifies her female protagonist but simply tries to deal with her situation, thereby providing an accurate commentary on the nature of modern love. When asked if she believes that she has done a “feminist” film or if she considers herself to be a feminist, Andrasev’s response was humble. She believes that the film is supposed to be empowering for women and she hopes that she is indeed a feminist. Though she doesn’t think she is doing enough (because doing enough is never enough), she is at least trying.