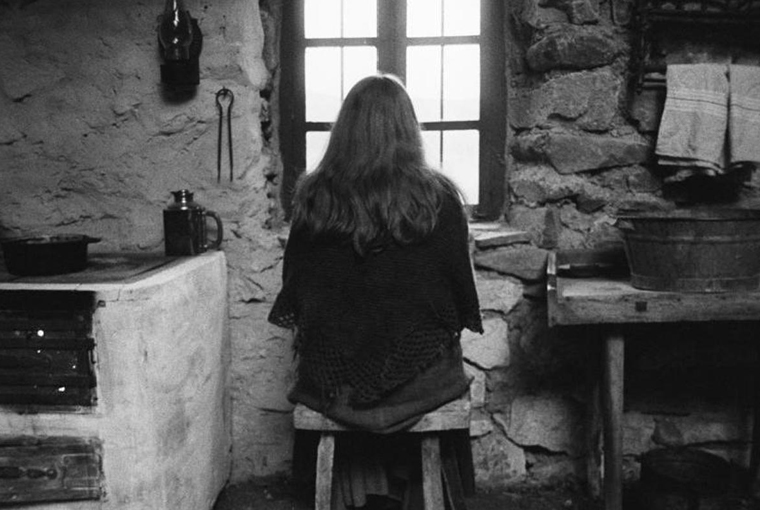 Béla Tarr’s The Turin Horse begins with an action.

After the opening credits, a narrator introduces the event that precedes the story of the film. In 1889 while in Turin, German philosopher Friedrich Nietzsche witnesses how the driver of a hansom cab starts whipping his stubborn horse. In an attempt to save the horse, Nietzsche throws himself in between the driver and the horse and collapses. After the incident, Nietzsche turns ill and stops publishing. This verbal introduction ends with a remark that summarizes the nature of this film: we do not know what happened to the horse. In The Turin Horse, director Béla Tarr follows the fate of the horse and his owners, an elderly man and his daughter living in a little cottage, over the course of six days. After the introduction, Nietzsche disappears from the film apart from a philosophical cameo, when a bald man appears from the midst of a storm to share philosophical ideas and buy alcohol from our protagonist. But clearly, the incident with the horse and Nietzsche is essential. Everything that happens in the story of The Turin Horse is secondary to the Turin incident. In the reality of the film, there is no before, but only an after. The cab driver is guilty before we see his face.

Béla Tarr relies on minimalist means to convey his idea. While Tarr is known for his lengthy rhythm of storytelling, The Turin Horse seems even more extreme in its dramatic and aesthetic asceticism. The film is carried by a single composition covering the entire soundtrack, and by the same scenes reoccurring day after day. It is a film of a meditative nature with much tension arising between the images, which makes the attempt to summarize this piece instantly obsolete. Although the film begins with an idea, this is not the place where the essence of the film can be found. The real power of the film lies in the tension of the scenery. Throughout the film, the little cottage and its surroundings are shaken by a storm that is intensified by the calmness of the characters confronted with it. But like in Werckmeister Harmonies, the source of the calamity is unknown and projected onto an animal- an innocent object that is incapable of responding. And even though the story takes place in a little cottage somewhere away from civilization, it seems as if the fate of the driver, his daughter and the horse was the fate of humanity. The environment gives a dimension to the film that is almost of a metaphysical nature – be it the man appearing from the midst of the storm to buy alcohol – the group of gypsies threatening the father and his daughter, or the never-ending storm itself. The Turin Horse is the story of an all-embracing conflict.

After the incident described at the beginning of the film, the horse stops eating and refuses to move out of its shelter. Again, the father starts whipping the horse repeatedly to get it to pull the cab. Again, flogging a dead horse. But the whipping is not an act of viciousness, but rather one of desperation. The father – although being the culprit – is finally a victim. His acts of violence are nothing but an attempt to fight the obstructions created by the environment and to prove his authority, and herein lies the profound tragedy of his character, which goes deeper than a shallow pity for his age or his injured arm. The power of the characters in The Turin Horse – particularly the father – who is clearly the backbone of the movie, lies in the fact that they are many-layered, although Tarr never expresses this through explicit verbal confrontation. The conflict is subtle, and in its muteness, magnified. The Turin Horse – far from being presented in a formalized cinematic language – captures a dimension of cinema that has been neglected by independent cinema and often misused by mainstream cinema: true emotion. Emotion that is carried by the characters and beyond them, that finally creates an entity – a world. The Turin Horse is a film that is part of the kind of cinema that directors like Marco Bellochio have demanded. One where little needs to be explained. The story is overshadowed by an action, but the action is the only thing that we do not see on screen – the film evolves solely through emotion. In the end, there is nothing left to say. The audience understands that the father, the daughter and the horse have stopped resisting the obstructions of the environment – the world stopped making sense.