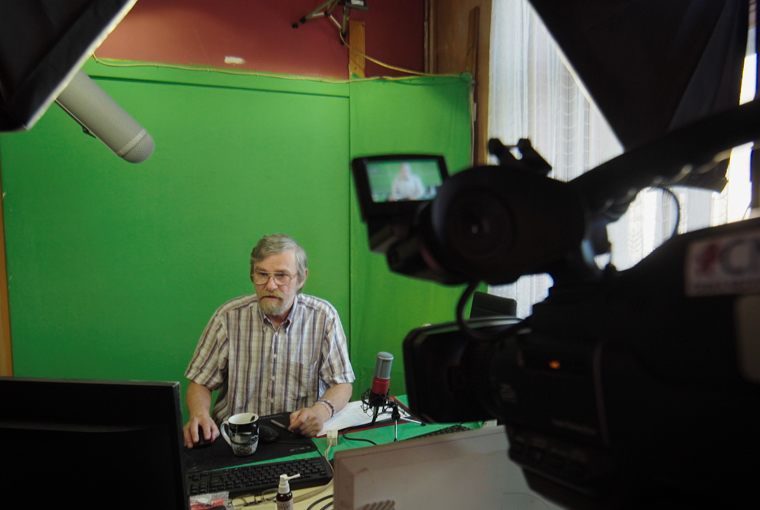 Šálek approaches his subject in an effort to understand his (presumably different) point of view. For four months, the filmmaker traveled to Černý’s house every weekend and developed a close relationship with him, parts of which he captured on camera. The portrait contrasts sharply with Petr Černý’s terrifyingly racist TV broadcast, excerpts of which open the film. Behind racist and nationalist hate speech, we discover a kind man whose morals are perfectly consistent with the Book of Leviticus. Notably, Černý took care of his dying father even though he says that he suffered physical and mental abuse from him as a child. Love becomes truly neighborly when we meet Jiří, a former miner, who lost his job after the fall of the Iron Curtain and now lives off a modest pension barely sufficient to uphold his alcohol expenditures. A loyal spectator of Černý’s show, he contacted Černý to ask his TV idol for help. Černý decided to offer him shelter without anything in return. The two men seem to co-exist in harmony.

Šálek and Černý develop an almost tender relationship. Against all expectations, their different political views never escalate in furious arguments but instead remain subtly implied. For instance, Šálek had promised Černý that he would participate in one of his broadcasts. The latter was supposed to include a representative of Zeitgeist, a Czech group of conspiracy theorists. We only get to see a small part of the show where Šálek and the other guest debate immigration and racial issues. Via a jump cut we are taken to the end of the show, in which Černý thanks the participants for finding some common ground. It is clear, however, that a strong argument had taken place in between. For the film’s finale, when Šálek is about to leave, Černý gives him a handmade clapperboard and we understand that he feels sad about the whole thing ending. This last scene might justify Šálek’s aesthetic choice to let off-camera elements, such as the boom, recurrently be part of the film.

All of this creates the impression that Černý is, indeed, a kind man who opened his doors to a so-called enemy. The terrifying fascist has a home and takes care of people. (He also has a wife who did not want to be filmed. We do however wonder why she was totally eradicated – there could at least have been some mention of her existence! Černý is not a sad loner after all.) Černý does not act violently, his violence is verbal – we definitely do not know what he would do if a group of Syrian immigrants were placed in a house around the corner and were given work and bread by the State. Such a scenario is unlikely to take place in this part of the Czech Republic and maybe this is Šálek’s point. Conspiracy theorists such as Černý are people who live on the periphery. One might even think that Černý is crazy, as most of his conspiracy theories border on the delusional. And so they may safely be considered harmless, or even cute, and their broadcasts too unenlightened to have the capacity to change the world. In a word: they are powerless.

But Šálek misses a point that many other directors in the country seem to be missing too (see Filip Remunda’s Okamura Brothers). It is one thing to show respect for and not make a fool of a marginalized amateur journalist who broadcasts racist ideology believing that it is a way to fight the establishment. And it is quite another to make a documentary that demonstrates sympathy for that man in a way that blurs the line between his personality and ideology. It seems very naïve to believe that Černý and others of that ilk – they seem to be growing by the number – do not feed into the establishment they fight against, as a sort of media cradle for people to be rocked to sleep. When people like Černý find a public voice they also normalize irrational discourse. So the question of their ideology becomes displaced and we start judging the rationality of racist discourses through criteria of personality and not by judging their irrationality independently of who is voicing them. More “rational” racist discourses, such as those on Czech TV, are already more acceptable to our ears, because those voicing them wear suits and live in cities.

The portrait of Černý could work as an interesting case study had he been approached and filmed differently. For his film Z 32, director Avi Mograbi filmed a former Israeli soldier who was responsible for the death of two Palestinian policemen. The cinematic approach that Mograbi opted for is an approach that tries to decodify the personality of the Israeli soldier (also a victim of specific social circumstances and political propaganda) but without forcing the viewer to see his “human face”. We actually hardly ever see his face. Mograbi pixelated his face, exactly because he wants us to understand that he is calling into question his own political and artistic approach when filming this man. He knows that images are never non-judgmental, and that it is extremely difficult, perhaps impossible, to brush off personal motivations and values, especially when filming an ambiguous personality. Černý is not a murderer, but those who have created what he stands for are. He alone has every right to be seen and heard, and we might be lucky to see and understand what is behind men like him. But the frequency in Good News transmits information too well – there is no white noise – and so we are left with an echo of fascism, which, quite alarmingly, seems to ring ever more discreetly through our loudspeakers as we comfortably seek to marginalize them.