We met documentary filmmaker Ondřej Šálek at the One World film festival in Prague (March 6-17), where he presented “Good News”, his 35-minute portrait of a right-wing conspiracy theorist. Šálek spoke to us about the idea behind the film, its ideological ramifications, and whether he thinks people can change through rational discourse.

I would like you to talk to us about Petr Černý. How would you explain who he is to a wider international audience, and what does he represent for the Czech Republic? Why did you choose to film this particular man?

Petr Černý is a prolific member of an alternative media scene, a symbolic figure for a part of society which is not rigidly organized but which is united around a belief in the unraveling of a genocide against the white race. We are speaking of a scene rife with conspiracy theories and anti-immigration, anti-Islamic political approaches that exist on the edge of society. He lives in the north of the country from where he runs his own DIY television, Czech National TV, which broadcasts for free, 3 times per week, news information, fake news, Russian propaganda news – basically anything that contradicts prevailing narratives. And he’s not as significant as he could be, because he has no political ambitions, and for the mainstream media he’s weird and unnoticeable. But for a lot of people who are kind of underground and don’t agree with the mainstream media and establishment values, he’s important. He has about 10.000-12.000 viewers per episode, which does not seem big, but for this alternative conspiracy scene it’s a high number and probably the highest one you could get for this type of show in the Czech Republic.

Your cinematographic approach is participatory. You did not just observe your subject but were rather actively engaged in the whole thing. How did you convince him to do that and why did you decide to film this way?

We are describing something behind the scenes. It’s important for me to look behind the curtains of this media scene, of this reality, see how it is made. I am also a participant of media reality and I wanted to break this wall but also show it in a constructive way. That’s why we decided to actually be part of the movie ourselves.

On the one hand, it was easy to convince him to be part of this, as he is a very kind man. If you talk to him for some time, he’s not a stubborn person who hates everything and would automatically decline every offer. You can argue with him. So, I talked to him on the phone for two hours. He had many doubts, but after we had met in person, we gained his trust and he gained ours.

His personality seems to be ambiguous. On the one hand there are his super conservative and racist claims, and on the other you see this kind man treating people around him nicely. How did you decide to depict this ambivalence?

This was the starting point for me. He does not fit any label. You can call him far-right, and that would be fair. But he also shares some communist values, for example, he supports wealth distribution, he sees how badly society is structured… So, he seems to be drawn to different political values and multiple points of view. For me that was amazing. You can’t sort him out easily. He is very ambivalent. He is really against immigrants, he does not think we should help them or that there is any Mediterranean crisis, but if a stranger knocked on his door, he would kindly help him. He really helped his dying father too, whom I also met as he was living in his living room. They took care of him all day long. For me it was amazing, I understood it’s not a black and white situation. Of course, with my social background, it would have been very easy for me to make a fool out of him and make him look ridiculous. I mean he is totally against every value I have ever stood for, and also all of his conspiracy theories about ISIS or the ILLUMINATI are of course funny and bizarre to me. But in the end, when we took him seriously, he opened up. He knew we were liberals and left-wing, I was open to him about it and told him how much I disagree with most of the things he says, but finally we managed to connect on a more personal level because after every argument we had – and we had many arguments about immigrants, politics, solidarity, gays etc. -, we would sit next to each other and talk about the weather. For me this was the point of the film, that everybody can connect but that politics are dividing us. For me the common ground was more important.

Do you think people who are not connected to the Czech Republic can relate to your film?

I really don’t know. I have a couple of foreign friends who live in Prague, they kind of get it. Of course, we wanted this to be universal and diachronic so that it would still be valid even if the immigration crisis were over for example. I don’t know if it would. I am still very much involved in the movie. But what we wanted to talk about is universal. It is about divisions among people and about how these divisions are created and how we can bridge the gaps. Of course, we can’t hack everybody who is opposing us and resolve everything, but at least taking them into our game, not showing them that we are superior but just hearing them and their stories out and taking their problems into account, is a good start. Because they do have many problems, and most of the time we are of course preoccupied with the problems of other communities and minorities and immigrants and we forget that these people have a lot of problems too. And they feel betrayed. I really felt this when I was doing this movie with Mr. Černý. He felt totally forgotten by society. And he does not really have any true social capital, he lives at the periphery of the state but he’s also a member of this state. So, this alternative media on the Internet gave him a voice. And it is important to remember that they live here, because they will never really perish. We can invite them to reach a common ground and talk to them.

When people see Černý in your film, they might try to understand him. Do you think your film and his participation might have changed him too? Did it make him reconsider his radical views?

Good question. Of course, we have influenced each other. In a positive way, I think. He would never admit it of course. We were shooting for 4 months there, every week-end we were there. After these 4 months he quit the television show, he does not broadcast anymore. I don’t think it’s a coincidence, I think there is a relation. He never admits it though; I have asked him several times.  But it’s not just me. You know, when you lose an enemy, when those left-wing young men take care of you and they listen to your stories and are friendly to you…

The same holds true for me. When I met him, he was a kind man, he was not a fascist. He did not want to kill me or take away my rights. So, I lost an enemy too in a way, and it was not easy for me to be super stereotypical about these people and fight strongly against them. My edges were softened. I was influenced by him because he is an anti-establishment guy and at the time, I voted in the presidential elections for the first time, so it was an important thing. I was so pissed off at the politicians for not paying any attention to these people, I just did not care to vote anymore.

So anyway, our dramaturgical arc was this. At first, Černý is a man broadcasting these horrible things, and then little by little we see him as a human being. You see his pains and problems. You can of course never understand the things he stands for but at least you can show some empathy. And one last note about whether he could ever change his political views. I think that is impossible. It’s for everybody almost, these sides are so connected to our identities and to who we are, and it is impossible to make one turn or change sides, just maybe soften one’s edges. Your views on global politics and your values are you, they are so closely connected to your identity.

But the media can change people, we have seen the media changing people’s political opinions and values in Europe, and not only here…

Yes, that is a nice argument to bring up. But I believe that when you have two strongly opposing sides, you can’t really change the other person’s mind. You can influence them incrementally and make them evolve, but you can’t change the core. For me any debate with two strongly opposing sides is just meaningless. You never even listen to the arguments of the other side. It could be nice if we could change through rational discourse, but for a man who has stood behind these opinions for 40 years, they are deeply anchored, like a religion. It’s like trying to turn a Christian into a Muslim or vice versa. 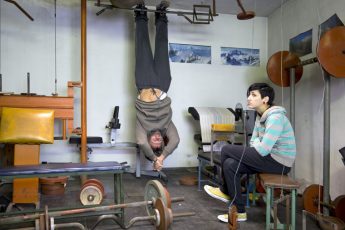