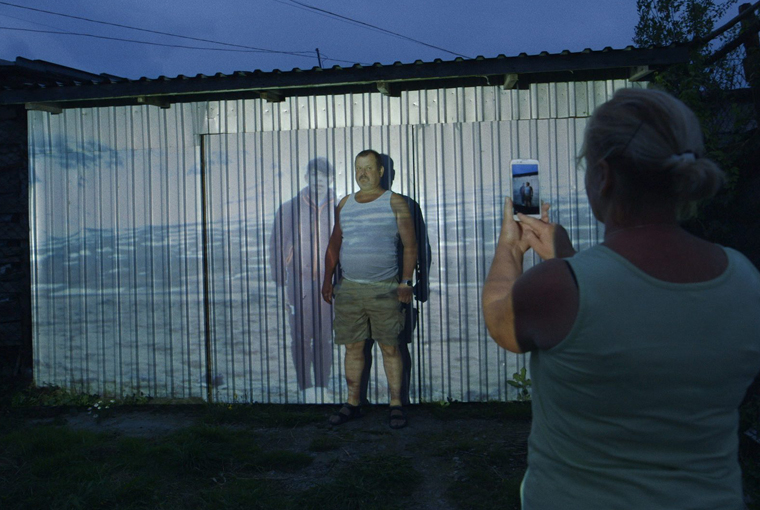 It is fairly indisputable that mass emigration is one of the defining characteristics of our modern era, and with it comes an inevitable series of adjustments and socio-cultural realignments. In his documentary In Touch, Paweł Ziemilski broaches the topic through the case of Stare Juchy, a Polish town that has seen one third of its inhabitants relocate to Iceland. In particular, he focuses on the question of communication between those who have left and those who have been left behind. How do you maintain a sense of continuity with different generations dispersed across different ends of the continent, speaking different languages and inhabiting different landscapes? How do you make sense of a loved one’s daily life in a parallel universe and how do you come to terms with the bittersweet realization that this separation is most likely permanent?

In exploring these questions, Ziemilski draws on an intriguing concept that pushes the aesthetic potentialities of Skype to their most extreme limits. Rather than just following a series of awkward phone calls, the film uses materials shot in each of the locations as the starting point for opening an exchange and bridging the two spaces visually. Images of the one site are projected within the other, sometimes in a simple, fairly classical form, with video messages or moving postcards displayed on the slightly more grandiose setting of a wall rather than the conventional laptop or phone screen. At other times, however, the set up is considerably more complex, with absent family members projected into the dining room during Easter lunch or a distant daughter painting her mother’s nails over the ether.

The variety and creativity of these visual devices is very impressive, and opens up a wealth of possibilities for exploring the topic in a formally imaginative yet meaningful manner. The notion of enabling interaction by reconfiguring the conception of inhabited space is especially powerful, and even more so in that it exalts a fairly banal, or at least commonplace, communication technology. However, the plethora of sub-approaches used throughout the documentary ultimately undermines its structural integrity and unfortunately leads it into the trap of gimmickry. With a different kind of device used in almost every scene, each of the narrative strands end up trailing off into nowhere, meaning any sense of progression and development falls totally flat.

As this fixation with formal construction overwhelms the actual content, the emotional significance for the people being portrayed also gets lost, which in turn makes it hard to sustain an interest in their predicament. They remain incarnated at the superficial 2D level of the projection, without taking on any more depth, and each character staying fairly indistinguishable from the next. Adding to this, at times it feels like the protagonists are still awkwardly adjusting to the technique, and they themselves appear more distracted than engaged. The sense of space in the two places is also given much more attention than the sense of community, with the result that the poignancy of the film from a social aspect flounders somewhat.

This raises the pertinent question of whether the protagonists actually gained anything from this experience, or whether they were just bystanders in a cinematic indulgence. Did the goalkeeper in a field in Poland attempting to stop shots from a striker kicking the ball not only from Iceland but also from the past really feel a stronger sense of connection and intimacy after the experience? Contrary to the logic on which the film is based, the simplest moments seem to be the strongest. Perhaps understandably, the characters appear less moved by the chance to see a different country on the side of a barn than by a frank, intimate revelation about the inner life of a physically distant but relationally close family member.

To reiterate in the interest of being fair to the film, each of these devices has great potential in its own right. Indeed, many of the scenes are very beautiful and striking to look at. The problem is caused first by their juxtaposition and second by the length of the film, which simply cannot be sustained on the basis of fragmentary moments alone. It’s something of a shame that more onus wasn’t placed on the characters themselves, with the development of the film built more reactively around their responses to the possibility to communicate in a more expansive and creative way, rather than imposing the methodology on them. If In Touch had managed to initiate an actual, prolonged dialog between the characters that had an effect on their relationships, then it would have been a very lovely work. As it is, it would probably be quite at home in a gallery space, where visitors are free to drift in and out, but it feels quite out of place in the cinema.