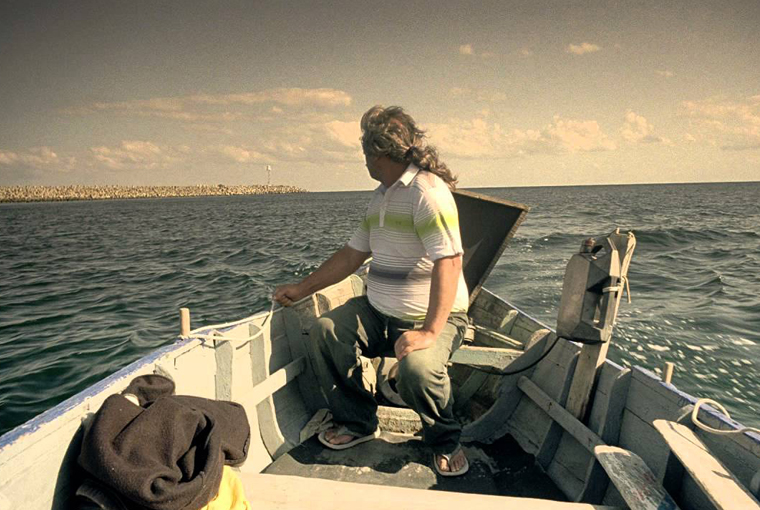 In his new short Horizon, Paul Negoescu follows a fisherman on a lonely boat cruise. Though the life of the loner is rather draggy (he can be seen fishing fish, watching the sunset, and puffing a cigarette here and there), our silent hero does not seem to care. When his boat is attacked by an underwater force, he flees to safety, hardly interested in the creature knocking on his hull. But as fate wants it, the wonderfully casted fisherman is finally swallowed by the sea, the camera latching onto the wavy water surface under which he disappears. What it is that devoured our pot-bellied friend, and whether it exists at all, we never truly learn. It is this uncertainty that seems to be the main theme of Negoescu’s short: the young director is interested in playing with the expectations of his audience. This idea was also present in Derby, in which a father suspects his teenage daughter of sleeping with her friend, but all his attempts to catch them red-handed are unsuccessful. Though in Derby, it is a character rather than the audience that is struggling with an epistemological barrier, the pattern is evident: we see whatever we want to see, whether there is evidence for it, or not. In the end, Negoescu throws all our realist expectations into the water, and what remains is the empty boat silently floating on the playful water.

At Cannes, Negoescu’s film is joined by Cristi Iftime’s The Camp in Razoare, another Romanian short which screened in the Cinéfondation section of the festival. The film revolves around Alex, a young man who insists on going up a local mountain in spite of having an odd pain in the abdominal region. He brings Vera with him, a friend who is about to get married, but is seemingly attracted to Alex. Iftime’s well-executed short is mostly dialogue driven and strictly realistic – thus also being more conform with what one would expect from a Romanian festival short -, but the abrupt ending could strip the director of his chances for a prize at Cannes. Judging from the story, Negoescu’s recently completed debut feature is closer to such realistic filmmaking than it is to the fisherman’s tale (the story focuses on a young man who breaks up with his girlfriend on New Year’s Eve), Horizon thus standing aloof as a refreshing and original story that uses very little to achieve surprisingly much.