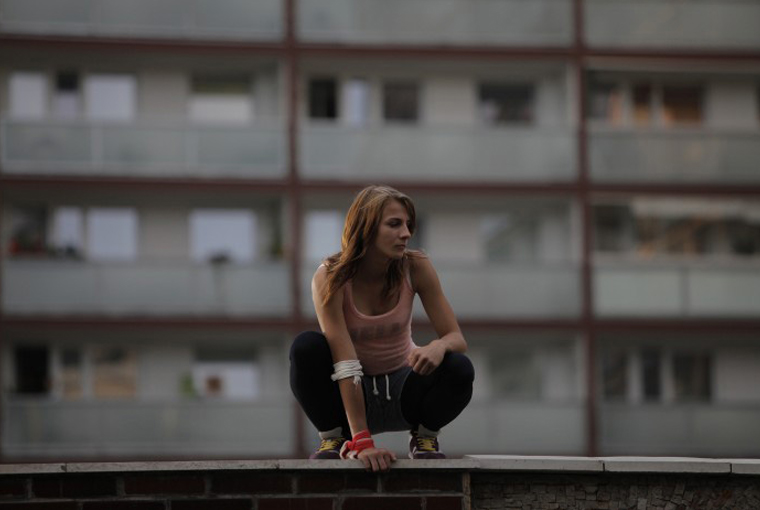 Laura’s father is a daredevil climber. Her mother worries more for Laura’s safety and wishes she wouldn’t climb. Sixteen-year-old Laura waffles between her divorced parents just as she waffles between being a loner and joining the local parkour team – and her dreams and reality.

Petr Oukropec’s 2016 In Your Dreams! blends magic realism with a sports-themed coming-of-age film. Laura (Barbora Stikarova) cuts short a visit with her dad (Ivan Martinka) to go back to her mother’s apartment complex where a local parkour team is holding try-outs. Laura’s shyness and mysterious vertigo prevent her from joining, despite encouragement from the team’s geeky videographer, Alex (Jachym Novotny). Simultaneously, tensions rise at home as Laura lashes out at her mother (Klara Meliskova) and her mother’s new boyfriend, Ota (Jan Vondracek). Neighbor Andreas (Adam Misik) offers friendship, and Alex seems to offer more, but Laura only has eyes for Luky (Toman Rychtera), the womanizing star of the team.

Doubtlessly due to such teenage stressors, not to mention puberty and hormones, Laura begins having vertigo-induced hallucinations each time she rides her apartment elevator. In her dreams, she is a princess chasing Luky, who is dressed as a hapless clown prince. In reality, Luky goes missing, and the chaos of a dream-inflected reality mirrors the angst of Laura’s teenage search for self.

In Your Dreams! contains the elements of an ideal film for children or early adolescents: a mild dose of magic realism, “normal” seeming main characters, realistic life conditions, and very cool footage of Czech teens back-flipping off of buildings and jumping across roofs.

The combination, unfortunately, falls flat. Laura’s vertigo – a problem that defines the plot – is never explained. Her relationship with her parents is insufficiently developed, so her hostility remains unrelatable, and her fair-weather attitude towards her father, in particular, seems more arbitrary than anything else. Finally, and most crucially, the “how” and “why” of her vivid hallucinations – not to mention their effect on her life and those around her – are never explained. Instead, the plot holes are plastered over with excessive footage of Laura sullenly marching through her apartment complex and watching the parkour team from under a furrowed brow. The film is ultimately not that different from puberty itself: confusing, unpleasant, boring – and a relief once it’s done.