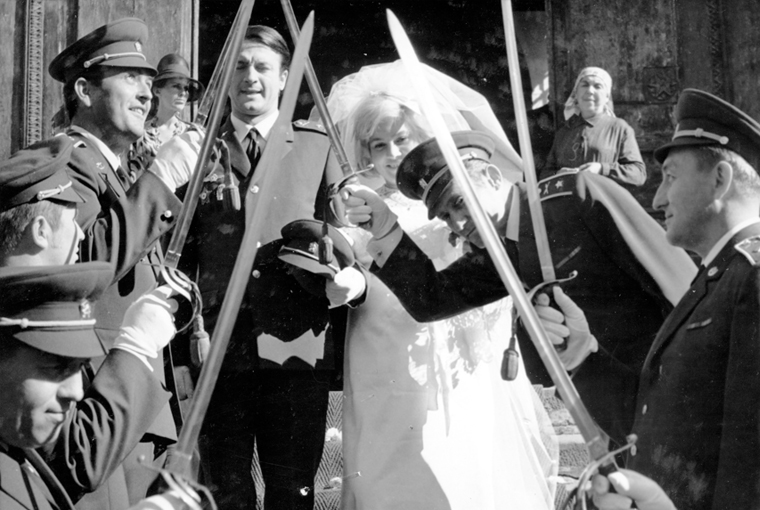 Drahomíra Vihanová’s poetic feature debut revolves around Ernest, a young Czechoslovak army officer who, bored by life and work, contemplates suicide while dreaming of surreal mass scenes and a past lover. Ernest, like many of Vihanová’s protagonists from other films, is an outcast, but he isn’t lonely: a friend brings Polish prostitutes to his place, and his girlfriend shares her American cigarettes with him. Still, he is troubled, constantly (during sex, sleep and drinking) thinking of this mysterious, blond woman that has stopped caring about him and who seems to be the only person who can save him – seems, because the borders between illusion and reality are thin in this film, and because Ernest’s love is closer to Wertherian, tragic impossibility than to anything else.

Full of biblical references and officer-to-officer conversations intercut with Godard-like quotes, Squandered Sunday goes a long way round for communicating that life is absurd. Like Wittgenstein’s Tractatus Logico-Philosophicus, Vihanová’s film ends with a revisionist message. In the Tractatus, Wittgenstein famously writes that his “propositions are elucidatory in this way: he who understands me finally recognizes them as senseless, when he has climbed out through them, on them, over them. (He must so to speak throw away the ladder, after he has climbed up on it.)”1 This self-relativising conclusion, which has puzzled interpreters for decades, reflects Wittgenstein’s skepticism about classical philosophy, one of the few stances he upheld throughout his life, meanwhile asserting that the purpose of the Tractatus is not to provide us with a new and better “theory”. The Tractatus is a quasi-therapeutic work which aims at resolving the questions of philosophy by readdressing them correctly, clearly delineating which questions can and cannot be answered philosophically. Vihanová’s message, though similar in style, is more straightforward: “Silence! Forget everything which you heard and saw,” a white wall reads before we fade to black. This, as the film reveals, is neither a self-reflexive meta-commentary on the boundedness of cinematic language, nor an attempt to preserve the universality of her claims, but the explicit reiteration of Ernest’s world view. Similarly to Wittgenstein, who concludes by saying that most, if not all philosophical propositions are senseless, Vihanová’s ending asserts that meaning, in this case metaphysical, and perhaps even semantic, does not exist; the main reason why Ernest seems to struggle every day to get out of bed.

One sunny afternoon, Ernest catches two sunbathers on the military territory that he’s supposed to be watching. He orders his assistant, an old, obsequious employee, to fetch them for him and prepares for battle: though smiling with delight as he watches the two bodies approaching from the distance, he stresses that they’re illegally entering military territory. To him, that’s an action which asks for punishment. Naturally, Ernest does enjoy the view of these two attractive women. At one point, his hand even reaches for one of them as he snatches a fly of her breasts. But he is undecided. Initially flirtatious and confident, he ultimately ends up with nothing but a useless protocol, insulted by one of the girls who returns to him crying to tell him that he’s mean and “a nobody”. Where the servile old man follows Ernest’s uniform, the sunbathers are less obedient. “He doesn’t have a pen,” they laugh when Ernest asks for one to sign the protocol, a bold pun lost in translation: “péro”, the Czech word for pen, also means dick. Ernest can aim well when he’s practicing – on the shooting range, he’s an expert. But when the gun approaches his temple or two young women conveniently appear on his territory, his confidence fades.

It would be impossible to guess, as an uninformed viewer, that Squandered Sunday cost director Drahomira Vihanová the right to continue pursuing her filmmaking career. Though breathing the air of the army base where it was shot at, her piece has less to do with politics than with an estrangement from the everyday world. In this sense, it’s close to films like Miklós Jancsó’s Cantata, where existentialist alienation may coincide with skepticism towards political reality, but it’s not conditioned by it. At no point is it implied that Ernest or Vihanová herself are interested in Czechoslovak politics, let alone critical. Even on the radio, the news of natural catastrophes give no sign of political incertitude. Still, Squandered Sunday, shot in 1969, months after the Prague Spring, was confiscated alongside four other films also shot within that time frame, with some directors, including Vihanová, banned from filmmaking for years (Vihanová was finally able to film in 1977 again). This doesn’t only reflect the paranoia of a censorship apparatus oversensitive at times of protest. It also gives the film some political significance retroactively, as it proves how little artists were allowed to contemplate about openly.

“Time stands still,” Ernest mumbles to himself uneasily as the sun shines in his eyes, a small piece of expository dialogue which reaffirms the obvious, as our protagonist consumes the day aimlessly, and an early pan on his bed reveals that his watch is broken. No, Ernest is not earnest. If anything, it’s earnestness he lacks most. He lacks it in his relationship with his girlfriend, whom he leaves ignored and insulted; at work, where he wastes time with petty bureaucratic formalities instead of getting the job done; and even with friends, or more precisely the one we get to know, with whom he quarrels over whores and guns. Still, he’s allowed to think he’s earnest, addressing challenges resolutely: “Drinking needs to stop. Once and for all,” Ernest tells himself, only to find himself appallingly drunk the very same night. Indeed, our protagonist struggles with both tending things and ending them, be it drinking, his unhappy relationship, or life.