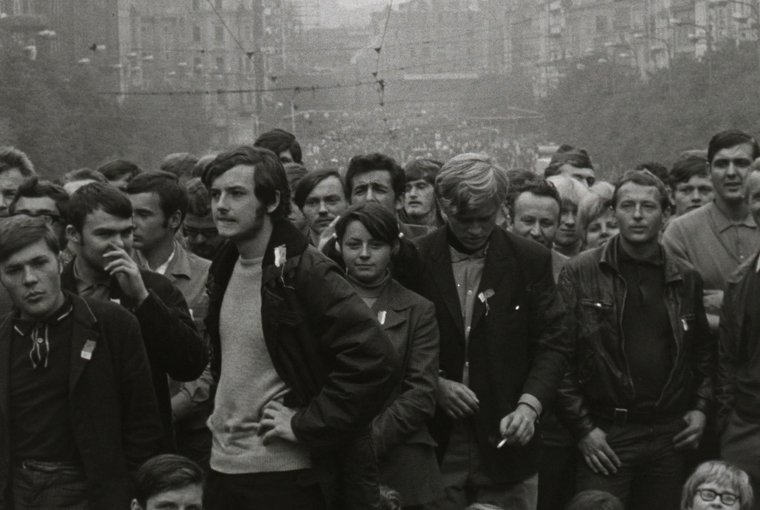 Milan Kundera’s debut novel The Joke, published in 1967, imagines a poem written by Alexej, a fervent Communist who is sent to a labor camp along with other ex-party members for perceived misdemeanors, including a title-lending joke which the authorities have no inclination to laugh about. The stanza, which Alexej shares with the narrator in a moment of comradeship, reads:​1​

Do as you please, Comrades,

But in my dog’s mask, under your spittle, Comrades,

I’ll remain faithfully in the ranks with you.

The narrator describes the sentiment expressed as one of “desperate torment”. His novel is the portrait of a generation of young people who are absolutely gnawing-on-their-tongues-fed-up with the endless oppression and inevitability of their lives. The bitterness expressed here and elsewhere in the novel is portrayed in Šikl’s documentary Reconstruction of Occupation, which was assembled from footage shot over the course of the year the Prague Spring happened, and then up to the present day. This was the very youth that Kundera was writing about. They feature in the found documentary footage, mostly taken on the 21st of August 1968 (the date of the Soviet invasion), in the archives featuring Jan Palach’s funeral, and in interviews with people who recognize themselves or loved ones in that footage and are interviewed today, fifty-three years later.

The filmic portrayal of the Prague Spring was discussed at length in a Prague Spring-themed issue in this journal,​2​ and one may wonder if a found footage documentary could bring anything more to the table, especially after Jan Němec’s Oratorio for Prague,​3​ which expressed the shock of the Warsaw Pact invasion so eloquently and pressingly. But Šikl told me that the main goal of his film was to understand what happened between August 1968 and 1969. How society changed from being so full of energy and joy to being, as he says, “without ideals, without hopes”.

Šikl is a connoisseur of Czechoslovak home movies. In collaboration with Czech Television, he realized a 2006 project entitled A Private Century, which consisted of eight found footage films from amateur home movies produced in different periods of the 20th century. This professional and personal fascination with archival footage led him, serendipitously, to come across some high-quality footage of the Warsaw pact invasion of Czechoslovakia August 21st 1968. He told me that his favorite place is the editing room, and it shows. The footage in Reconstruction of Occupation is woven together so intricately that it seems to have been filmed specifically for this documentary. The opening is a series of Super 8 vignettes depicting small moments of everyday life: a boy pulling a gigantic fish out of a lake, another lovingly squeezing the breast of his adolescent girlfriend, families playing and celebrating together. After coming across the footage, Šikl went on national television to speak about his discovery and set up a website to which material was uploaded, asking people to get in touch with him when they recognized themselves. The calls came flooding in. More than fifty years after the events unfolded, some people were ready to come to terms with what had happened.

The film carefully documents and reconstructs Šikl’s approach. A lip-reader is brought in to glean from the silent film the words of people in closeups and a speech given by a factory boss. It’s nice to watch a craftsperson at work – especially as it mirrors the director’s own careful craftwork. Those who come forward with their own memories add illumination to the image. One of the people interviewed recognizes himself riding on the back of a motorcycle and shouting out Dubček’s name as he joyfully waves a flag. Now he is shown watching this footage again on the screen of an iPad, shaking his head. He speaks bitterly about Dubček, the reformist Slovak head of the Communist party in the country at that time, and how he ultimately disappointed the people. A woman spots her mother, whose son was killed by the Soviet tanks in the week of the invasion. Smoking compulsively and looking off into the space in her small flat, she speaks of the horrors she experienced as a child as her mother’s repeated suicide attempts and ultimate suicide left her alone to grow up with both her mother and brother dead. When asked about the ambiance of 1968, one man speaks of the deep sense of national humiliation, physical pain seeming to stretch out the skin of his face. Time has allowed these people to take stock of what had happened, and they speak about it with perhaps greater clarity than has been forthcoming in previous depictions.

Regarding the question of why citizens lost hope in those months following the invasion, one surprising aspect emerges obliquely yet consistently in every interview: the suicide by self-immolation of Jan Palach. The 20-year-old Czech student of history and political economy at Charles University in Prague decided to take his own life to protest the dissolution of the Prague Spring in January of 1969 and the surrender of Czech society. Šikl’s interview subjects speak about him with difficulty, many of them recalling his funeral as one of the darkest times of recent history. Šikl arrives, by the juxtaposition of confused reminiscences with the tragic footage of Palach’s funeral, at a new, multi-layered interpretation of his heroic role: though nobody speaks against his act, the sentiment transpires from their testimony that Palach had gone too far, that no one else could hold up to the standard of resistance he had tried to set.

Fifty-three years to the day since Soviet troops invaded Czechoslovakia on the 21st of August 1968, Reconstruction of Occupation premiered in the Kino Čas cinema hall in Karlovy Vary for the fifty-fifth edition of that film festival. It was a full house that morning despite the festival program’s bland synopsis for the film. From my vantage point in the last row of the hall, I did not take note of a single walk-out – astonishing for a film festival and even more for a found footage documentary. The audience was enthralled. Like Kundera’s novel, this film expresses collective attitudes, and sets them against personal and individual acts of rebellion. Although the contrast between them seems to point out the rarity of the rebellious act, by putting the lens on so many individual stories, we come to realize the shared turmoil behind the protagonists’ desperate initiatives. While his film is masterful, Šikl is modest about his aspirations for it. He told me that he hopes it can be shown in schools throughout the country. The story that Šikl tells of his eleven-year-old self in 1968 shows why that might not be such a bad idea.