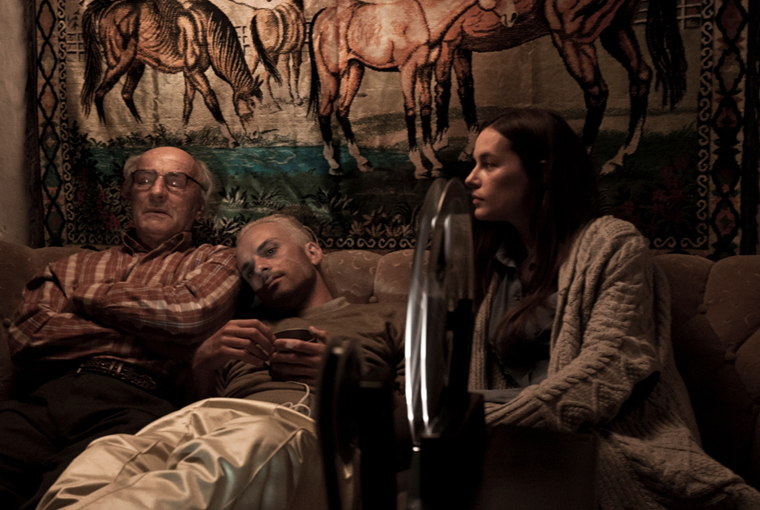 The new film of Przemysław Wojcieszek is a study of three mismatched Poles. Ksawery (Tomasz Tyndyk), a dancer who performs as a drag queen in Warsaw, is visiting his grandfather, Jan (Marek Kepinski), in the country. With him is Karolina (Agnieszka Podsiadlik) whose relationship to the exotic Ksawery is unclear—she is initially presented as his agent. As the title of the film may suggest, one of them has a secret, and we soon realise that this secret is held by Jan, whom she is investigating.

Should an old man be punished for the horrific crimes of his youth, even if leaving the case alone means he will never be brought to account? Could admitting to such a crime do any good considering that he is near the end of his life? Jan is a man of about eighty, his wife as well as his children seem to have died a long time ago. He is presented as a docile old man, tolerant of his grandson’s unusual work, although preferring not to know too much about it, and even going so far as to say that he worries the audience might hurt his grandson. He potters around the house, reading in his rocking chair, watching old family videos and cooking sardines. It’s difficult to believe that this might be the very house stolen from a Jewish family, the poet Aikerman and his young son, who disappeared under mysterious circumstances.

We learn that this case had been tried some years before. Jan’s refusal to talk about the trial, his utter unwillingness to discuss in a serious way what happened, makes both of the young people very agitated. Ksawery, the grandson, is initially terrified of bringing up the subject with his grandfather, and it is only after constant pressure from Karolina that he finally does. When he asks his grandfather, Jan repeats the same story he seems to have told a thousand times before, adding those ambiguous words, “I was acquitted”. Ksawery is angry at this reply. “I know all about our family porn”, he says. Ksawery knows he is not hearing the truth, but he is afraid to hear the real truth. The crimes committed by our fathers live on within us long after they have been committed. Guilt is passed down the generations like a loathsome inheritance. Jan may die in peace, but a chance remains his grandson will carry the question like a burden throughout his life. Ksawery lets out his frustration in dancing. He dresses up in extravagant gold costumes and high heels; if he can be someone else, he doesn’t have to face the truth.

Jan keeps reminding his grandson that he is all that Ksawery has. “I am an old man” he says, “don`t destroy our relationship now”. What he is really asking his grandson is to let him live the rest of his life in peace. But peace at what price? Karolina is a young Jewish woman. She wants to know the truth, even knowing that this will cost the quiet lives of Ksawery and his grandfather. Like Ksawery, Karolina is carrying a family burden, but that of a family of victims rather than of criminals. Karolina doesn’t particularly seem to wish the old man harm. There is even one touching scene where Karolina and Jan dance together on the front porch to an old song he danced to at his wedding. Jan is a respected man. At a wedding, he is asked to speak, and he sings a love song for the newly-weds. Karolina lets out her frustration with the situation in her own way, by screaming. Her character is ambiguous, we don’t know if she is a journalist or just an interested party, but this screaming indicates that she must have personal interest in the story. Karolina screaming is the very first image of the film. The scream was so loud that it is unpleasant to the viewer, but the director admitted to me the day after the premiere that he had had problems with the sound level at the beginning of the film.

Clearly Wojcieszek wanted to keep the pace of this film fast, somehow reflecting the urgency of the situation: Karolina wanting to get a confession out of Jan before the end of his life. At one point she asks Jan, “What is it like to kill a young child?”, and he attacks her, hitting her wildly but feebly, which is all he can do. This film explores the extensive problem of war crimes which have never been solved. It is a startling film, with bursts of sounds and rapid jump cuts coming up as the characters work in the kitchen or walk through a forest. In short, Secret is the story of two generations and two cultures, and a confused young man who is caught up in the middle.