Volcano (2018) begins with a close-up of a small volcano. A group of four people are driving towards this deserted countryside. The car rolls to a stop, the window slides down, and the driver starts talking to a sallow-looking man who has emerged from a small hut which looks more like a random wood construction than like a proper checkpoint. The car breaks down. An irritable man in the back tells the driver to use his cell phone. He has no reception. He gets out and walks for a long time to look for a signal, crossing on his way two dangerous-looking men dressed in camouflage suits. Are they from the army, or are they civilians? It’s hard to tell. The man hitches a ride back to his car in a tank, but by the time he gets back with the keys, the car has disappeared. Five minutes into the film, it already feels like chaos.

We are in the southern Ukrainian steppe, far away from civilization as we know it. Lukas works as a translator for the OSCE (Organization for Security and Cooperation in Europe). He’s Ukrainian, from Kiev, but he’s completely unfamiliar with the reality in his own country so far away from home. The area is basically steeped in anarchy: draft-dodgers, criminals and escaped prisoners all have free reign. It’s hard to tell who is on the Russian side and who is on the Ukrainian side. Mostly it’s each to his own. The person who gives him a lift in a tank is Vova, who helps guide Lukas in this dangerous land. Though Lukas does not want his help, he soon learns that it is more than needed.

This is Roman Bondarchuck’s first fiction feature, after Ukrainian Sheriffs, which followed two policemen in the middle of South-East Ukraine. These two films try and put some order into the chaos of the current political situation in the country, especially in regions like Kherson, on the border between Crimea and the rest of the country. He does this by creating characters out of the anarchy; eccentric survivors. Those who profit from the situation and those whom it harms. Though Volcano is often funny, shocking moments occur throughout the film. Fighting breaks out between locals and those from a neighboring village; it erupts suddenly and Lukas is caught in the middle, having been blamed for stealing the girlfriend of one of the wannabe gangsters. But it goes from slightly amusing to frankly alarming as they throw knives as well as punches and launch small homemade bombs. You can see that they are shooting to kill. When Lukas makes it out alive and asks Vova what happened, he replies with a nonchalant shrug. It’s two groups that don’t like each other, he explains. People are bored and therefore bellicose.

This filmmaker has solid previous experience in documentary making. He contributed shots to the famous Euromaidan, Rough Cut in the middle of a war zone in 2014. Echoes of that film permeate Volcano. Vova explains that he went to fight for his country in the Maiden – photos of himself wearing a hard hat and full army apparel line the mantelpiece. The grandmother is a fixture of the living room, listening to fake news about Ukraine on Russian television.

Though Lukas is from the same country, he is very clearly a foreigner here; some of the locals think he is German. Lukas’ city arrogance shines out in everything he says, from the way he suggests that Vova find a job to his earnest explanation of the seven-year cycles of life. His quest to fulfill his life’s purpose in what is now his fifth cycle (he has recently turned 35) is the object of ridicule. But the ridicule veers between slightly amusing and downright disturbing, as his naivety about a country he thinks he knows turns out to be almost fatal.

The film is dedicated to those who were made to leave the region because of the Reservoir. In Stalin’s time, ostensibly because of a water shortage, more than eighty villages were forcibly evacuated. In Volcano, we see the now-sunken villages that existed before it was built. Pompei-esque, they surge out of what looks like mist, but is really the water. The beauty of these images is unforgettable. In getting to know the people of these villages, Bondarchuck, like his protagonist, has come to know the land and with it the dangerous grace of that remoteness. 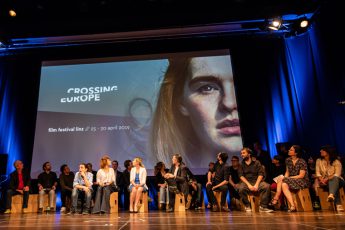