The World in a Cafe 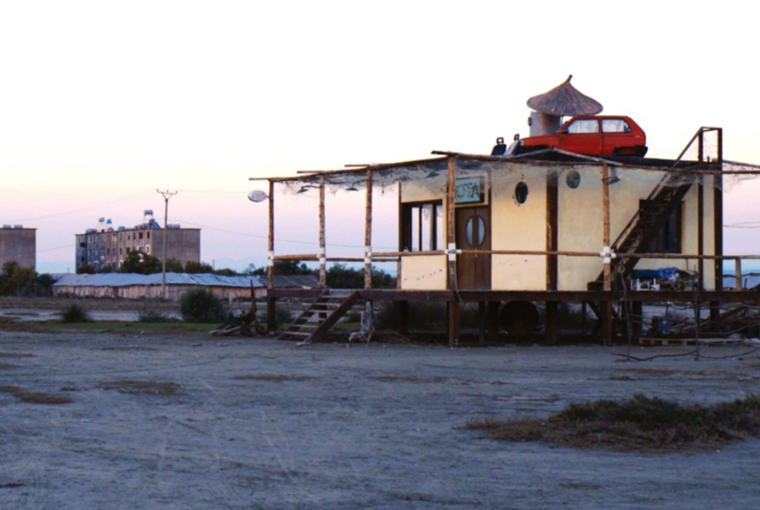 From Jean-Luc Godard’s long and contemplative take on the twirling universe inside the coffee cup in Two or Three Things I Know About Her (1967), where the director reflects upon bigger philosophical questions, to the world in an improvised wooden shed – a small village cafe, somewhere in abandoned, backwater Albania. From the center to the periphery, and back to the center again; central questions which have occupied humanity and philosophy for centuries: loss, forgetting, memory, remembrance, death and life. While presenting a microcosm of human drama with intertwined stories of love, betrayal, hardship and struggle in today’s world, Bota deals with a particularly traumatic moment of Albania’s Communist past: persecutions of citizens for so-called anti-state activities. The plot develops around a quirky cafe called Bota (which translates as “the world”) – situated on the outskirts of an isolated village – in a block of socialist-style buildings where the families of the persecuted once used to be interned (who are still unable to leave due to their financial situation).

Juli (brilliantly played by Flonja Kodheli) is the manager/waitress of the cafe, who dreams of leaving her job to pursue an artistic career but has to look after her almost senile grandmother, Noje (Tinka Kurti). Her cousin, Beni (Artur Gorishti), a small-time crook who owns Bota, is having an affair with Nora (Fioralba Kryemadhi), a beautiful waitress. Meanwhile, the construction of the local motorway, an Italian-led project, is underway, which will connect the isolated village to the rest of the country and hopefully bring in new opportunities. The film presents an array of different characters and situations – scenes of contemporary Albania: teenage-run, improvised car washes; a shepherd blocking the road with his herd; a van with loudspeakers selling fruit and vegetables; a bank clerk who is about to lose her job if another customer account is closed. The view of Socialist buildings, the music and Juli’s dreams are hints at what Albania may once have looked like, leaving it up to the spectator’s imagination to recreate the atmosphere of the Communist period.

Bota premiered in the East of the West selection of the 2014 Karlovy Vary Film Festival, where it was noticed by critics and awarded the FEDEORA (Federation of Film Critics of Europe and the Mediterranean) prize. The film was met with enthusiasm (being the first Kosovar production ever to enter a first-class film festival) and described as “an understated co-production between Albania, Italy and Kosovo”, “a first pleasant surprise”1 and a “serio-comic debut from backwater Albania” recalling Percy Adlon’s 1989 film Baghdad Café2. The film had a commercial theater release in Albania later that year, premiering at the Cinema Millenium in Tirana in November 2014. The wife-and-husband director duo Iris Elezi and Thomas Logoreci had spent four years researching and reading in order to ensure that the fiction film is historically accurate. Once financing was secured (the film was supported by the Albanian National Film Center and Albanian Radio-Television), it was completed within nine months with a total budget of 750 000 Euros.

There are several references to Ismail Kadare’s novel The General of the Dead Army: a character who is commissioned to search for people’s remains (and who also resembles the priest from Kadare’s novel) mentions “the general of the dead army”, and a short scene from Dhimiter Anagnosti’s 1989 eponymous adaptation The General of the Dead Army (Kthimi i ushtrise se vdekur) is seen showing on TV. Ismail Kadare is an internationally renowned Albanian writer whose works have been translated into many languages, and one of few who had creative liberty in Communist times.

Like the novel, the film functions as a cathartic exercise (both on an individual and collective level) in attempting to reveal how one can deal with the hushed (hi)stories from Albania’s past which still seem to haunt and permeate the present even today. The film is carefully constructed to represent a forgotten past through the drama of contemporary characters and their personal stories which resonate with a larger community and Albania as a nation. Beni is an opportunistic entrepreneur and polyglot (he speaks Italian, French, English, Greek) who hides Noje’s financial compensation from the state, owes money to a local shark and attempts several times to make deals with Italian road construction businessman and investor Filippo. However, he is also a conflicted character who has lived through persecution and isolation and his contemporary actions are visibly driven by an instinct for survival. Juli’s grandmother Noje is played by Tinka Kurti, a renowned Albanian actress who had appeared in over thirty films during the Kinostudio era, starring as protagonist in the first Albanian feature film, Tana (Kristaq Dhamo, Albania, 1958). Noje’s death at the end of film seems to coincide with and symbolically mark the end of an era, namely that of Albanian cinema history during the Kinostudio years. The national movie studio Kinostudio Shqipëria e Re (New Albania) financed all fiction and non-fiction films made in Albania since its foundation in 1952 until its dissolution in 1990. Very few Albanian films made during the Communist period were seen outside the national context apart from those which participated at the Giffoni Film Festival in Italy and those distributed in China during the Cultural Revolution.

The surreal landscape that figures as the film’s setting gives it a dream-like feel. Bota draws a fine line between fiction and reality; it’s almost as if our perceptual capacity is called into question, especially when it comes to Albania’s past. Perhaps the film is set in an isolated village and a socialist block of flats, but it is at the same time at the center of ‘the world’. The story functions on several levels, and little by little these unravel throughout the narrative, allowing the spectator to put the missing pieces of the puzzle together. The absence of souvenirs and memorial objects from the Communist past is supplanted by the use of traditional Albanian music (recorded during the period), which adds an air of timeless (if forgotten) beauty and contemplation to the delicately framed mise-en-scène and brightly composed cinematography.

Even though it deals with harsh themes, the film ends on a hopeful note. Noje’s death and the discovery of Juli’s mother’s bones as well as the revelation of state crimes committed under the Hoxha regime lead to a new start for Juli. In acknowledging the past’s phantasms, the authors suggest what the future of Albania might look like. Director Iris Elezi stresses how in Albanian literary works, there is always a sign and hope of light and love despite tragedy3. The film comes full circle at the end, as Nora’s character is seen dancing in the deserted landscape outside the cafe. The scene is evoked earlier when Noje watches Dhimiter Anagnosti’s film, in which a scene shows a young girl – smiling and happy – dancing ballet.