Film, Food and the Balkan Spirit 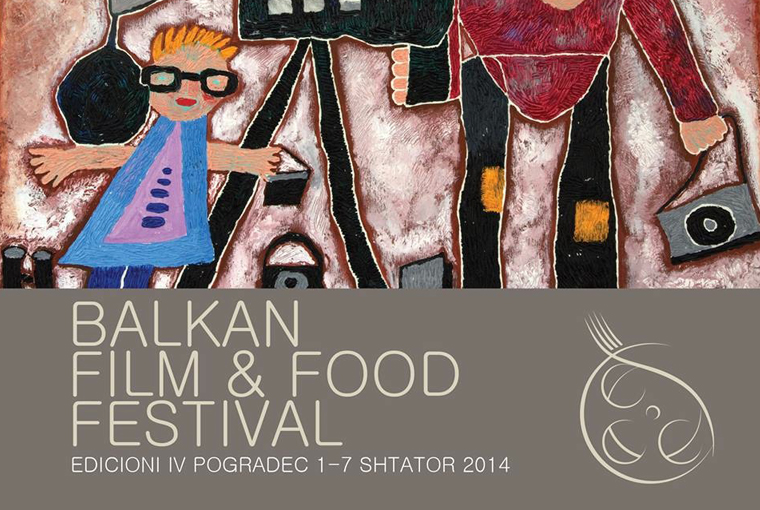 This summer I had the pleasure of attending two exceptional cultural events in the Balkans: Divan Film Festival (26 – 31 August 2014) in Cetate, Romania and the Balkan Film and Food Festival (1 – 7 September 2014) in Pogradec, Albania. The ingenious idea of combining cinematic and culinary delights seems to be an ideal combination for the multi-faceted region. To quote the artistic director of the Divan Film Festival, Marian Ţuţui; “in addition to a variety of defects that brought them ill fame, the Balkan people have at least two recognized qualities: a gorgeous cuisine and the beginnings of a distinctive film culture.”

The Divan Film Festival takes place on the banks of the river Danube (which itself traverses much of the Balkan Peninsula) at Cetate, close to where the borders of Romania, Serbia and Bulgaria meet, while the Balkan Film and Food Festival takes place in Pogradec by the lake Ohrid, thus being situated near the Albanian-Macedonian border and on a historical trade route from Ottoman times. Various cultures have met over the course of centuries on these crossroads, and now both festivals bring together filmmakers, scholars, actors, producers and film enthusiasts from all corners of the Balkans. They meet here to watch both old and new films made in the region and beyond. Guests share their common cultural and culinary legacies over dinner, while conversations and debates often last until the early hours of the morning. Although these festivals are relatively small, many of their guests are well-known directors and actors, notably Slobodan Šijan, Nikos Perakis, Nae Caranfil, Piro Milkani, Lucian Pintilie, Saimir Kumbaro and Margerita Xhepa.

The uniqueness and bohemian vibe of the Divan Film Festival, now in its fifth year, dictates no competition nor awards. Instead, the festival revolves around a theme which allows the organizers to program retrospectives of old features alongside new shorts, documentaries and feature films. The film repertoire is accompanied by workshops and a yearly symposium that was launched in 2012. The artistic director of the festival, Marian Ţuţui, has also managed to edit a festival volume with the symposium papers. This year, the theme of the symposium was “Heroes and Anti-heroes in the Balkans”, which initiated much debate amongst the academic community present – the two-day symposium was chaired by Prof. Dina Iordanova (University of St Andrews, UK), a renowned specialist on Balkan cinema. Scholars and researchers from various Balkan countries and beyond (Nevena Daković, Lydia Papadimitrou, Electra Venaki, Dana Duma, Aleksandar Ianakiev and Wang Yao), presented talks on famous national heroes and anti-heroes (such as Alexis Zorbas, Hitar Petar, Pacala and Nastratin Hogea), while discussions revolved around the construction and frameworks behind heroic images and popular imagination. One of the highlights of the festival was surely the screening of Un été inoubliable (An Unforgettable Summer, 1994) attended by director Lucian Pintilie and his wife Marie-France Ionesco. The late-night screening of the Greek film O vasilias (The King, 2002) which tells of a small community and its being shaken up by a stranger, reminiscent of Greek tragedies, contrasted with a more hopeful outlook on a group of young people trying to set up a commune after the devastating economic crisis from Little Land (2013, Greece-France, dir. Nikos Dagadias), a documentary which screened the next day.

The Balkan Film and Food Festival, now in its fourth year, ran for a week and was packed with screenings of shorts, animation films, documentaries and feature films (out of competition). The festival jury included Thomas Logoreci, the director of the recent Albanian film Bota (2014) that was lauded by critics after its screening at the Karlovy Vary International Film Festival, and Eric Velthuis, an accomplished documentary filmmaker and producer from the Netherlands. Three of the awarded films deserve special mention: Skandal (Albania, dir. Elton Baxhaku and Eriona Çami), A Perfect Day for Bananafish (Serbia, dir. Stefan Malešević) and Thresholds (Croatia, dir. Dijana Mlađenović). Skandal, the first feature documentary which dwells into the Albanian LGBT movement, was actually quite well-received, even if the audience in the small lake town of Pogradec remained tacit during the screening. Considering the mass protests and continuous repression of LGBT communities throughout the region, the award for Best Film was an important step in recognizing the need to reinforce activist efforts. The film Thresholds, which was named Best Short, touches on the still sensitive topic of the Croatian government’s forceful evictions of unfit occupants (that is non-ethnic Croatians) during the Yugoslav Wars in the early 1990s. A Perfect Day for Bananafish, directed by a young filmmaker from Bela Tarr’s Sarajevo Film Academy, is based on the eponymous short story by Salinger. It transposes the uneasiness of being to present-day Serbia and the after-effects of the recent Kosovo conflict.

Both festivals fuse films, food and the Balkan spirit for the duration of a week, making them unique and original experiences for any festival-goer and cinéphile. They allow for cross-cultural cooperation and break with the dominant media discourse that spreads discordance among Balkan nations while debunking the concept of Balkanism. These festivals render a picture of a Balkan people who share more similarities than differences – in cuisine, in humor and of course in their unique and exciting cinema. As Eno Milkani notes in our interview: “Balkanians can sit at the same table and have a good time!”