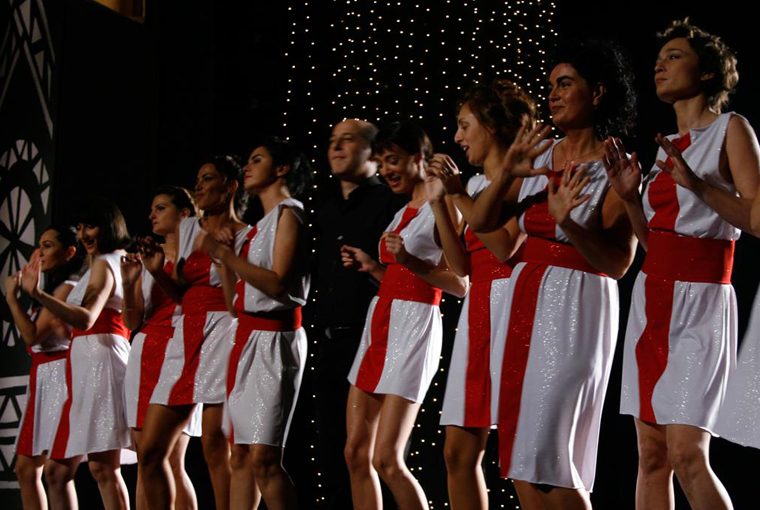 Keep Smiling premiered at the 69th Venice film festival in September last year, six months before another Georgian film, In Bloom, screened at the Berlinale. Both were picked up by distributors. Two features from this small country gaining international success is a rare event. That they both had female directors makes it a noteworthy one. As well as Nana Ekvtimishvili, In Bloom had a male director, Simon Groß.

Both films focus on the female body as currency in impoverished Tbilisi. Nevertheless, the subjects are different: In Bloom focuses on the marriage of an innocent fourteen year old girl in the 1920s, while Keep Smiling takes on ten mothers – ‘used goods’ in the eyes of society – in the present day.

The mothers are taking part in a competition to find “the best mother in Georgia”. The prize is a brand new apartment – an impossible fantasy for most of these poor women, who live in tiny spaces; some in apartments with paper-thin walls, one in an abandoned hospital, another evicted during the competition along with her four children. The contest, which is broadcast on television, involves several stages, like in an American contest. The mothers, dressed in extravagant outfits, answer questions with their children and give speeches about what motherhood means to them.

The image the mothers are supposed to project is often at odds with tasks that they perform. They are required to express notions of sage motherhood in front of the audiences, but they are also forced to parade around in bikinis against their will. When they protest this collectively, they are threatened with exclusion from the competition and lawsuits. They have to conceal their desperate desire for the apartment. Yet they are asked to primp and preen and make their eyes ‘shine’ for the cameras, tutored by an absurd television producer.

Who said that beauty is the perfect balance between perfection and chaos? Whatever perfection might mean: perhaps it has something to do with fashion. The only fault of these productions is forgetting the part of chaos that exists in the equation. Only the so-called talent segment (where the entrants show how they can sing or dance) plays a role in revealing it. In the film, tragic Gvantsa (Iamze Sukhitashvili), who was once a famous violin-player, is the only one who has true talent.

The competition gradually disintegrates, in the tradition of beauty contests that go wrong. Think of the 2000 film Miss Congeniality, starring Sandra Bullock as an undercover cop who poses as a beauty pageant participant, or Little Miss Sunshine (2006), in which child-star Olive involves her wacky family in the preparations for her competition. These films make fun of the beauty competition. We laugh at the deranged parents – we might even call them twisted – who squeeze their little girls into sexy dresses and cover them in make-up. These shows reveal the perversion of those who seek perfect beauty, while the media both glorifies and demeans such behavior. Vanity and greed are served up by television for the delight and the disgust of the audience. Spectators identify with the figures they see on the television in their greed, and then, cathartically, reject them as vulgar.

In Keep Smiling, things become more and more doubtful. What at first seemed like a playful, stupid competition, turns into a sordid tragedy – a monstrous parody of the realist genre.