The Kids Are Not Alright 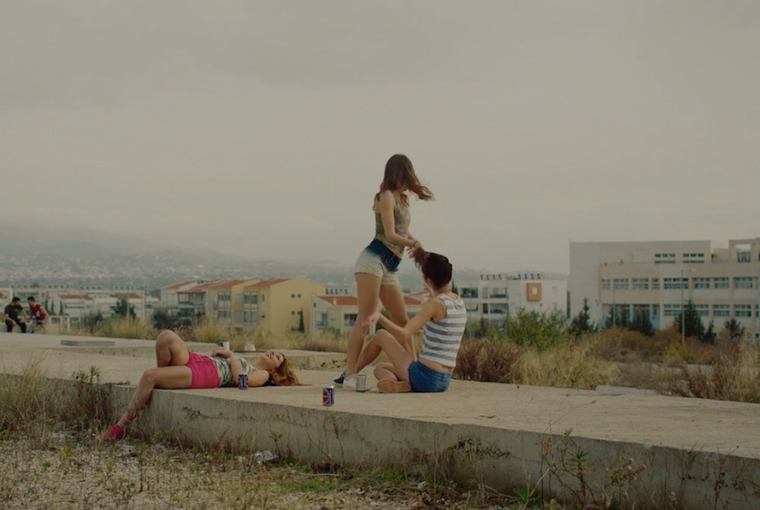 In Sofia Exarchou’s debut feature, more than a decade has passed since the Athens Olympic games in 2004. A lost generation of teenagers waste their childhoods in the inglorious remains of the Olympic village, behaving wildly and unruly. They struggle to find work, pining for the new money reserved for the resorts on the other side of the shore. Two young lovers Dimitris and Anna try their best to come to terms with the truth that their future was stolen from them.

The social and historical context of the film is given a refreshingly alternative perspective by the Greek New Wave director. In place of a narrative centered on adult lives and job loss, the focus is shifted onto children. The adult presences in Park, which are few and far between, do not bring familial stability or support, but in fact negatively impact the lives of the children. For example, Dimitris loses his job at the marble yard in a complication most likely arisen from his mother’s less than sexual relationship with his boss. There is a real sense of abandonment for these children who are rarely seen with their parents. Even so, when the audience is offered a glimpse at the parents’ existence, they are revealed to be drunks and layabouts.

Different types of pain are a recurring theme in Park. They are manifested in the motif of highly visible scars that cover the otherwise soft, supple skin of the children, in particular Anna. In a rare, emotionally charged scene, she reminisces how her arms and legs were broken during gymnastics training on the high beam in preparation for the competitions that lay ahead in a once bright future. These markings represent both Anna’s literal, physical damage and also the economical damage felt by the country itself. Anna’s hopes and ambitions, along with those of an entire generation of youths, were broken at the same time as her bones. The incident has crippled her in a similar way the financial crisis has crippled Greece. This sensation of hurt that is constantly alluded to by the scars is amplified by the incessant bouts of bravura. Howling like wolves and barking like dogs, the boys roughhouse and bully one another into submission, hitting and slapping until the playfulness is turned to painfulness. Another memorable scene involves Dimitris struggling to retrieve the bloody corpse of his dead dog Ari from a deep, muddy pit. Tripping and sliding down its filthy, wet slopes, the pit is reminiscent of the social and economic hole Dimitris has found himself in and can never escape from.

The society the children have manufactured for themselves is a highly volatile one. One moment they work collectively, vandalizing the already dilapidated and decrepit environment. The next, they turn on each other without reason, wrestling and groping one another in aimless abandon for what seems like an arbitrary period of pointless competition and lurid conflict. This creates an uncomfortable tone throughout the film, one of disagreeable tension. These highly strung characters make for an anxious viewing experience. Their world has no rules or consistency and their actions are therefore impossible to predict. And yet, for all the ceaseless, chaotic noise and petty violence, the narrative always falls short of hysterics. The drama displayed in Park is persistently on the cusp of tragedy, but never quite reaches its full, hyperbolic potential. One interpretation of this directional subtlety may be that the lack of theatrical fulfilment is a mirroring of Greece’s own failure to live up to its expectations in the aftermath of the financial crisis. There is a cinematic potential within scenes being purposely ignored or rejected in order to evoke a similar economic denial within the country itself.

The real poignancy of the film lies in the inherent irony of the setting. The eponymous park to which the title refers to is part of the 2004 summer Olympics. However, just like the original stadiums located in Athens from hundreds of years ago, these parks inexorably become ruins. Costing the city millions of Euros in the hope that a global sporting event would provide enough media exposure to be repaid via the tourist industry, Greece’s gamble to host the Olympics paid out only in more debt. It is exemplary of the current wastefulness that should be associated with the modern model of Olympic sites, rather than celebrated. Park offers another insight into such negative consequences through its depiction of tourism. Holidaymakers plague the shores, drunken and disorderly, exploiting the falling exchange rate of the Euro. They are people of extreme excess, exhausting the resources of local businesses and leaving citizens with the bear leftovers. In one scene, a group of Danish travelers literally throw money around in a bidding war to witness Dimitris strip and plunge into the ice-cold sea.

The aesthetic of the film is an amalgamation of styles, ranging from social realism to coming-of-age tale. But Park is far from a teenage love story. It is a dystopian reminder of what lies in store for the rest of Europe in the face of economic annihilation, a forewarning of what is at stake and what we have to lose. If these children are the future and they have lost all hope, then what hope do we have for the future?