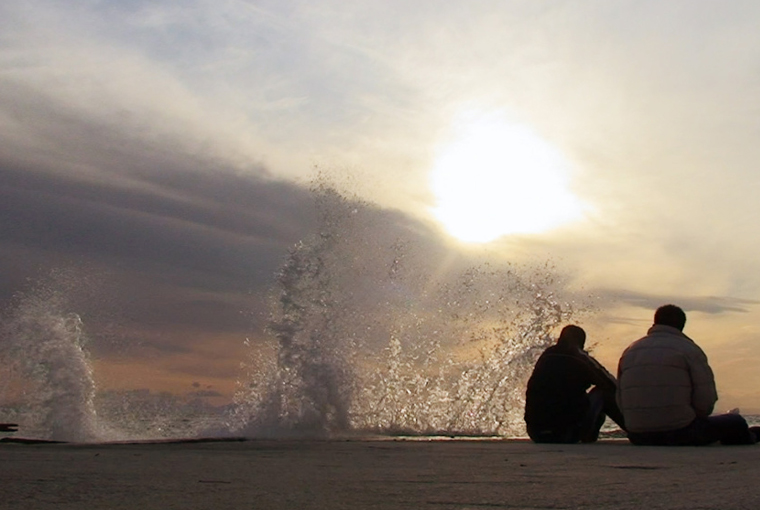 For thousands of immigrants, Greece is one of Europe’s main entryways. It has permeable borders which can be bypassed via the Mediterranean Sea. According to the Schengen Agreement, refugees cannot ask for asylum in more than one country. Immigrants entering Europe on Greek territory, are therefore prone to apply for asylum in Greece and are sent back there whenever they get caught trying to enter another European country. As a result, Greece has turned into a final destination for those seeking a better life in Europe’s North. Unable to continue their journey, many clandestine immigrants end up stuck on the Greek territory for months and sometimes even for years.

In 2011, the director Kaveh Bahtiari, of Swiss-Iranian origin, arrives in Athens where he will stay one and a half years to film a group of Iranian immigrants, among them his cousin Mosheh and six more Iranian men and an Armenian woman. Originally, Bahtiari went to Greece for professional reasons and coincidentally found out that his cousin was imprisoned in Athens for having crossed the borders illegally. Bahtiari’s contact with his cousin led him to follow the group and gradually record their life in the basement of an apartment complex known as “Amir’s apartment”, in honor of Amir, another Iranian immigrant who accommodates them.

Bahtiari respects the rules of the group. One such rule forbids references to one’s past and accordingly the viewer doesn’t know anything about the immigrants except that they had to leave their country of origin and that they were all deceived by their smuggler. Stranded in Athens they try to get hold of a “fake” passport (a real password of someone who looks similar) enabling them to continue their way North. Bahtiari’s immigrants are waiting, a condition which gives them an awkward sense of time, defined not so much by night and day as by the unexpected occurrence of a phone call announcing the acquisition of the desired ID. The film’s elliptical narrative structure which constantly returns to the same scenes – phone call, packing, farewell – reflects this combination of seemingly endless waiting and the dependency of one moment in which this waiting can come to an end.

Stylistically, Bahtiari switches freely from scenes in which he participates (we never see him) to scenes where he seems to hide behind the camera; from interviews to direct cinema; from shaky cam to steady cam. In this blend of stylistic approaches one may be astonished to discover a couple of metaphors that reflect the confined situation of the immigrants, their hope for a way out and possible memory of what they left behind.

Stop-Over thus begins and ends with the image of a window that touches the ceiling of Amir’s apartment and gives a view on the street. “Why this curtain?” asks Bahtiari in the opening sequence. “So that nobody can look inside. Immigrants hide behind such places.” The curtain represents all political, national, and material borders that keep Bahtiari’s immigrants from continuing their journey. The window corresponds to the hope that lies beyond these borders. Curtain and window give a remarkably concise and poetic image to the immigrant’s condition. In art, windows have, at least since the 19th century, the connotation of an inaccessible reality, a life beyond the frame (see picture 1 and 2).1 A similar iconography can be found in Bahtiari’s film. It is all the more noteworthy because the offhand style of the film gives the impression that it is not at all concerned with aestheticized references to Europe’s cultural memory. But a closer look shows that the director explicitly establishes these kind of nostalgic images, most notably through a shot-reverse-shot (pictures (3) and (4)) in which Mosheh gazes at the window. 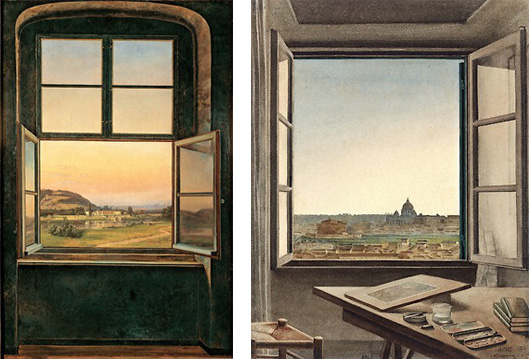 Another scene at the beach represents this idea of confinement more obviously. Greece is almost entirely surrounded by water, which turns the sea into a massive border.

Many scenes in the film show the character’s woe and suffering in a more unmediated way. A large part of the film is dedicated to Hamid, a martial arts amateur dubbed Bruce Lee, who goes on a hunger strike, his mouth stitched, in front of the city’s UNHCR branch asking for a response to his asylum request. He has been waiting for it for five years. There is also Yasser, a handsome immigrant in his thirties who can be seen choking with sobs talking to his family in an internet café, or Jahan, who is 16 years old and the youngest in the group, expressing at length his fears of getting caught. Such scenes confront the director with an important dilemma: should a film about immigration show misery as the most important element of an immigrant’s life or as one element of many? While many films about immigration tend towards miserabilism, Bahtiari juxtaposes dramatic scenes with humorous ones. Even in the most desperate moments of the film, Bahtiari’s immigrants never lose their dignity.

There are many examples for this tragicomic duality. The most powerful is perhaps the one where the hunger strike scenes in front the UNHCR building are intersected by a scene in the kitchen of the basement where two of the immigrants are mixing a fruit juice for the strikers to drink. They laugh at the culinary disgust provoked by their soup. Throughout the end of the scene, the camera focuses on the men’s stately potbellies and one of them suggests to the other that they should definitely go on a diet. “Yes, on a hunger strike for example!” replies his friend.

Sometimes these abrupt mood changes provoke a Brechtian effect of kicking the spectator out of his voyeuristic comfort-zone. The film’s comical scenes keep its more delicate/nostalgic moments from turning into variations of pathetic maudlinness. Stop-Over pursues an almost ethical effort not to sell its character’s dignity to the demands of the cultural industry for heartbreaking stories. Instead of feeding pity candy to an audience trained to wash away feelings of culpability in cathartic exercises, this films invites the audience to think about the general living conditions of its characters. By cooling the film’s emotional temperature, Bahtiari makes it clear that the universal backdrop of his story relates to the political context in which his characters are trapped in and not to the generality of shared emotions created simply by showing the specifics of their daily pain.

Perhaps the most important aspect of this film is the director’s solidarity with the group. Many films defend the rights of the oppressed, disfavored, and abject under the premise that “showing” is enlightening enough, knowledge is the first step towards improvement, etc. etc. But few films actively participate in what they show. Bahtiari is sincerely engaged in the reality he depicts. When Mosheh, the director’s cousin, is arrested, he goes to the police station to help him get out. His participation increases when he decides to change his plane ticket and stay longer with the group. One of them replies “with pleasure”, showing that he shares the director’s wish to capture their lives and be a part of it.

The director’s participation in this film, the fact that he shared his life with the group in “Amir’s apartment” and that he stayed with them all the way sharply distinguishes this film from other stories about immigration, documentary or fiction which are often reduced to exhibiting misery and individual issues (the most extreme version of this is the almost perverse dramatic tension in Welcome which turns into a quasi sports-event about whether the clandestine immigrant in the film will “make it” across the English Channel or not). Films like Stop-Over encourage a different mode of thinking, one that is based on commitment, personal investment, and true political awareness.

During the last decade, immigration has infiltrated the political and social discourse in Greece and elsewhere, which has not escaped the attention of press and cultural media. Let’s recall for example Chantal Akerman’s documentary De l’autre côté (2002), about Mexican immigrants on the U.S. border or Morgen (2010) about a Kurd passing through Romania on the way to Germany, Philippe Lioret’s Welcome (2009), Aki Kaurismäki’s Le Havre (2011), and Emanuele Crialese Terraferma (2011). Bahtiari’s documentary is part of this wave of films about immigration. With its mixture of dry humor and mean realism, the film’s closest ally may be Kaurismäki’s Le Havre, but Bahtiari’s choice to participate in the life of the immigrants gives a voice to the ill-treated immigrants in Greece and makes it a unique masterpiece.