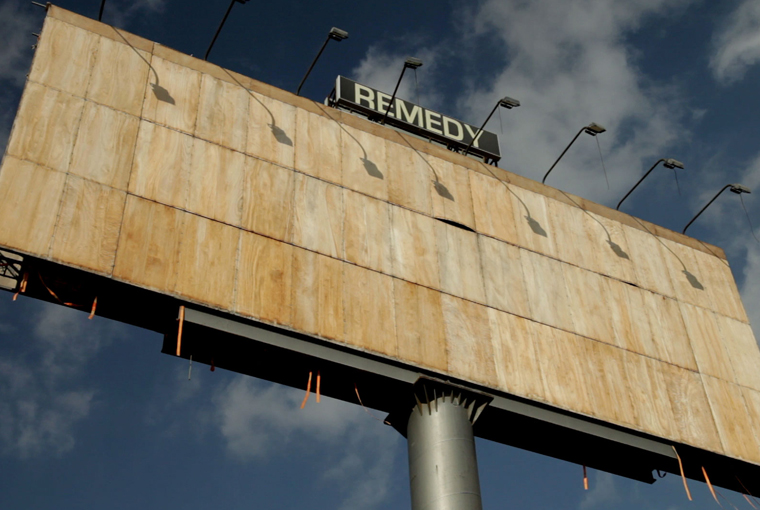 Out of Frame is a short film by Greek director Yorgos Zois who won the EFA award at the Venice Film festival in September of this year. The original title of the film is “Titloi telous” which literally means “end titles” and is used to describe film credits. In modern Greek language, the phrase “titloi telous” is also metaphorically used in various contexts to refer to endings in general. The film consists of 15 photographic sequences that show a series of big advertisement boards in the center and the surroundings of Athens. Most of the billboards are broken or vandalized. Rather untypical for the representation of Greece is the cloudy sky stretching over most of the billboards. The background is as unattractive. Ugly urban cityscapes or abandoned construction sites, vandalized walls with sad graffiti messages, and passing cars provide for a scenery.

The reason why the billboards no longer serve their purpose goes back to a court case. In 2005, a twenty-five year old man on a motorcycle had a fatal accident close to one of the billboards in Athens. After December 2005, twenty-seven other fatal accidents are known to have happened for the same reason. The man’s father, a lawyer, went to court claiming that the death of his son was due to the illegal placement of the billboard. In 2010, the case led to the application of a law about “outdoor and rural publicity” (Νόμος  2946/2001 of 2010). According to the law, most of the advertisement boards had been illegally placed from the beginning (most of the times with the accordance of local authorities). Thus, every advertisement poster had to be removed from all boards that did not comply to the criteria set by the law. And the majority didn’t. The procedure of removing the ads was long and difficult and its result only became evident during the last year. Sadly, no law cared to specify the need to remove all of the boards themselves. The film of Yorgos Zois presents only a small sample of the current urban image of Greece.

Of particular interest and artistic reward is the film’s sound design. A helicopter, an ambulance siren, airplane turbines, the sound of an orthodox church bell ringing, a barking dog, car corns, and people and children voices add emotion and life to the otherwise cold and over-aestheticized images. If it weren’t for the sound, the film may not even feel like a film at all, but more like a picture album or a photo series. While the empty billboards look alienating, like uncollected trash, the everyday sounds make the billboards more real. In other words, the ugly billboards and their uselessness invite us to ask in what way they are related to our own life. The director said that those boards are the monuments of our time.1

Indeed, the empty billboards are mirrors of the current situation in Greece. They represent the social and financial collapse of the country. It is almost ironic how the billboards mirror Greece’s fall into capitalism and the specific corruption capitalism levered. Like so many things promising money, the billboards were constructed on illegal grounds. Far too many examples were built, giving a false impression of prosperity and demand. Compared to today’s imposed austerity, they are relics of a period of over-consumption. But it is doubly ironic that the retrieval of merchandise and commodities from public view are still publicly visible, almost staged. Maybe the strongest symbolism of the billboard is that both economical visions it displayed are utterly fake. 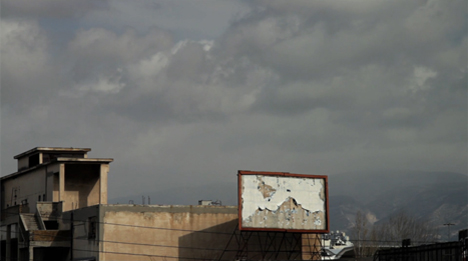 But the empty and broken advertisement boards are not the only monuments of the vast growth and fall of the Greek economy and society. Images of the lost glory of the 90’s can be found everywhere around the country. A great example of this are the images of the abandoned stadiums and structures that were built using great amount of funds for the Olympic games of Athens in 2004. Enormous luxury structures were left to rot after the end of the Games. Since no one cared for a meaningful utilization of those structures, they now shelter the homeless. 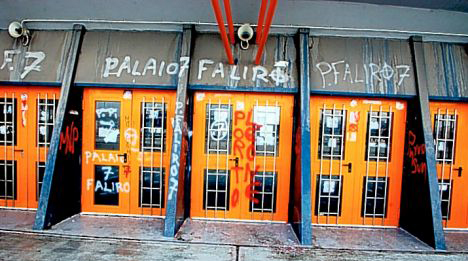 Graffiti covers a stadium at the Faliron site

And since the city of Athens lacks basic structures that would serve the homeless and excluded people, those expensive construction spaces offer an absolution to all of those who could not stand the view of the homeless and the drug addicts into the city center.

The empty advertisement boards might only coincide with the Greek crisis, but they have a lot to say about it. On the background life goes on, but it no longer continues normally. All of the above are images and realities that reflect the development of Greek society during the last two decades. Over-consumption turned into over-austerity; megalomania into misery. A failed violent capitalistic system encouraged the hungry Greek society to claim its role as the strongest Balkan player who dreamed of becoming a powerful Westerner without either being prepared for it, or questioning what being a Westerner would result in.