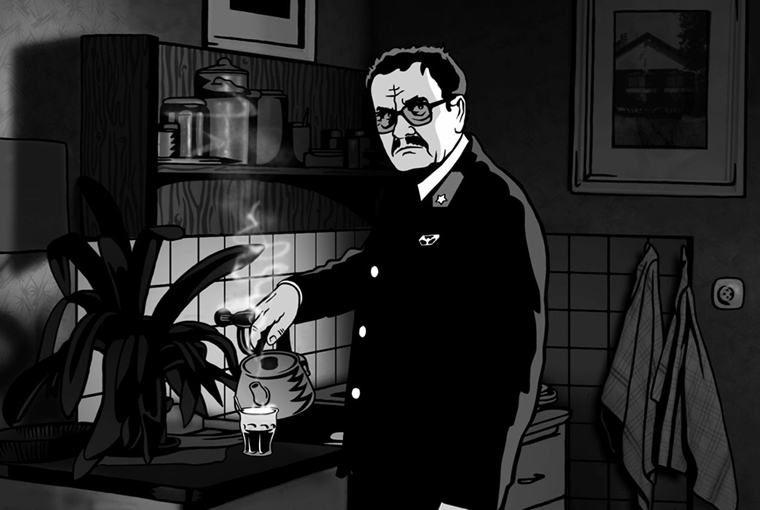 Tomáš Luňák‘s first feature film Alois Nebel is an animated feature based on a Czech comic by Jaromir 99 and Jaroslav Rudis. The film uses Rotoscopie, which means that it was first shot on film and then drawn-over frame by frame – a meticulous process which took the director five years. While the characters in the film seem entirely fictional, some of the objects and scenery maintain photographic realism. This form of palimpsest, of recycling real life images and converting them into something else, goes well with the story of the film. Alois Nebel, also the name of the protagonist, is haunted by memories of an unsettled event from the past. His life changes, however, when a stranger shows up to straighten things out.

Alois Nebel is a 60-something train dispatcher, whose life seems as forlorn as his railway station. In 1989, shortly before the collapse of communism and the end of the Warsaw Pact, when the transportation of goods was perhaps less active and travelling not yet on the agenda, there is not much more to do for Alois Nebel than to think about the past. His day-to-day job is so routinely that he only keeps track of time by obsessionally reading his log-books, whose content and times can hardly recall any real events. Alois Nebel escapes time through time.

The moment from the past that seems to have left a memorable trace in Alois Nebel’s mind goes back to 1945. At the end of World War Two, many Czech-Germans were expulsed to Germany. When one family has difficulty leaving, a Czech officer shoots the father of the family out of revenge for the German occupation during the war. The young Alois Nebel is witness to this event and later recognizes the son, who returns to the area in 1989 with plans for revenge. His target still lives in the area. Working in a local bar, he made money during communism by dubious liquor importation from Russia.

Many other things happen during the film – like for example Alois Nebel’s short stay in a psychiatric ward and another stay in Prague where he begins a love affair. However the central theme of the film remains the unfortunate events of 1945 and the stranger’s search for revenge. Alois Nebel not only recognizes the avenger as the young boy, he also keeps the stranger from being seen by others and gives him shelter. In a way he works as an accomplice, assuring that the revenge will take place.

Even though Alois Nebel’s traumatic memory is redeemed by the return of the avenger and his act of self-justice, this outcome seems unrealistic. Isn’t the avenger another “redemptive angel” much in the style of the Stasi functionary played by Ulrich Mühe in The Life of Others? Like Donnersmark’s film, Alois Nebel tries to rewrite the past by inventing angelic heroes that save the ordinary citizen from the wrongs he passively has to suffer.

The film itself is a palimpsest. It erases traumatic memory with fantasies about a Clint-Eastwood-like savior. In this belief, it might have more in common with the absolutist ideas defining the time of his major character. The film’s “melancholy” side some critics seemed to have discovered is on a par with this. The bleak touch of the film is its underlying nostalgia for a condition based on promises about a better future. It describes the impossibility to create hope for change out of an obsession for past events.