Mortuary Comedy from the Balkans Hits Almost the Right Notes 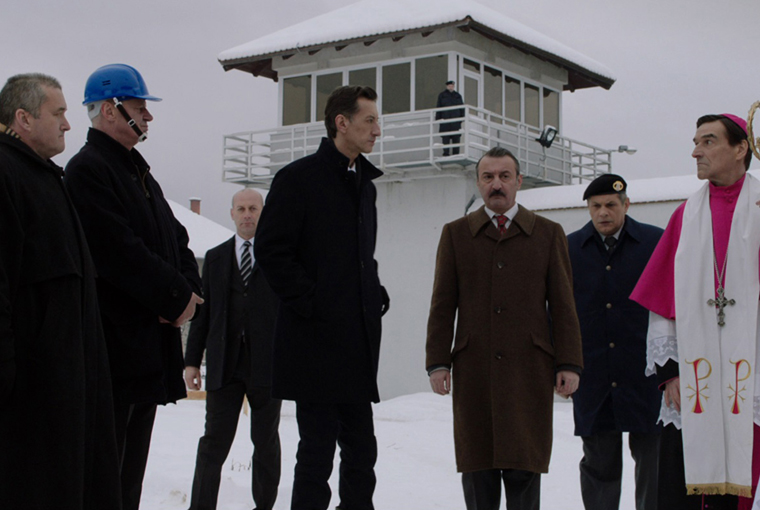 How many times have we used some such expression to describe the desperate situation in our respective Eastern European homelands: “Oh, Romania, Romania,” or “This can only happen in Bulgaria,” or, as in the case of Vinko Brešan’s Croatia: “What a Country!”

The premise of Brešan’s film is as amusing as is its title. Despondent and unhappy with almost 30 years of independent rule, and using his characters as a medium for his grievances, the director suggests the downright abolishing of the republic of Croatia. Now this is a bold proposition, particularly in a country that’s been known for its fervent nationalism and go-it-alone style of governance, which ensured that Croatia was among the first to separate from the federative union of Yugoslavia in the early 1990s.

But Brešan doesn’t stop at this proposition. In order to make his dislike for the Croatian government crystal clear, he cooks up an alembicated formula in which a gang of aging misfits resolve to remove the dead body of Croatia’s nationalist first president, Franjo Tuđman, from his final resting place in a landmark cemetery in Zagreb. This is only one of the parallel stories that make up Brešan’s impassioned response to contemporary politics in Croatia. The others revolve around a minister who volunteers to be locked up in the very prison he is supposed to inspect; and a suicidal army general who is disappointed that the independent country he once fought for didn’t turn out to be exactly what he had hoped for. Complications arise when the four misfits (wearing nothing less but the jerseys of famous national football players) can’t agree on what to do with the body. What follows is an imaginative comedy in which the above-mentioned subplots crisscross to convey a sense of disorientation that characterizes present Croatian society, all of which is served with an understated dose of Balkan black humor. If Yugoslav directors of the last Socialist generation like Slobodan Šijan and Dušan Kovačević immortalized that black humor in dark comedies such as Who’s Singing Over There (1980), Balkan Spy (1984), and Marathon Family (1982), Vinko Brešan remains one of the few faithful followers of the genre (possibly along with Srđan Dragojević).

What seems to both hurt and turn into a source of humor in Brešan’s film, is the fact that a country that used to be so extremely multicultural and multiethnic, became a uniquely Croatian nation with a whitewashed past in a matter of mere decades. Why is this a source of both pain and humor in the film? Here’s an example. One of the funniest scenes ensues when the four “pallbearers” seek out a new grave for the dead body they have just removed, and end up in a Serbian cemetery. Taking this unlikeliest of places to be the greatest hideout for their “trophy”, they resolve to bury him where no one would expect him, that is “among his enemies,” as one of the characters wisecracks tongue-in-cheek. Similar serendipitous events follow from the unorthodox paralleling of the various subplots, which helps deliver a sense of what one can only call ironic catharsis. What Brešan undoubtedly has in mind with his comedy is to sarcastically ask (if sarcasm were appropriate in this otherwise somber context): what was the use of a bloody war of independence if Croatia is today heading in the same multinational, multiethnic direction that has always characterized her identity anyway?

If I have any reservations about Brešan’s film, they have to do with cinematic pacing and rhythm, and, secondly, with ideology. As far as rhythm is concerned, we wonder sometimes as we watch the understated acting, why a comedy that could have made audiences literally choke with laughter, has intentionally decided to put the brakes on. Relatedly, one wonders whether Brešan exacted the style he wanted from these otherwise versatile actors – household Croatian names in both film and TV whose fame goes way back – when he opted for the slow-paced comedy he finally ended up making. I am resolved to think that ultimately the film pays its homage to the above-stated legacy of dark Balkan humor, whose main features are a certain understatement and slowness that have not, however, kept the 1980s comedies from being unreservedly funny.

The second concern, with ideology, on the other hand, may be harder to resolve. While Brešan shows his understandable disappointment with postwar Croatia, asking what happened to the country his generation had fought for, the unanswered question remains: what about the even older country of Yugoslavia? How does Brešan position himself vis-à-vis that inclusive, if authoritarian state, that somehow managed to keep interethnic tensions to a minimum?

Aside from these issues, Brešan’s film manages to inject a dose of novelty into Balkan cinema some thirty years after the downfall of Communism. We can only hope this novelty, and the black humor style it perpetuates, will influence the upcoming generation of Croatian directors in the same way the 1980s generation has influenced Brešan.