A Peace Garden Close to the Front 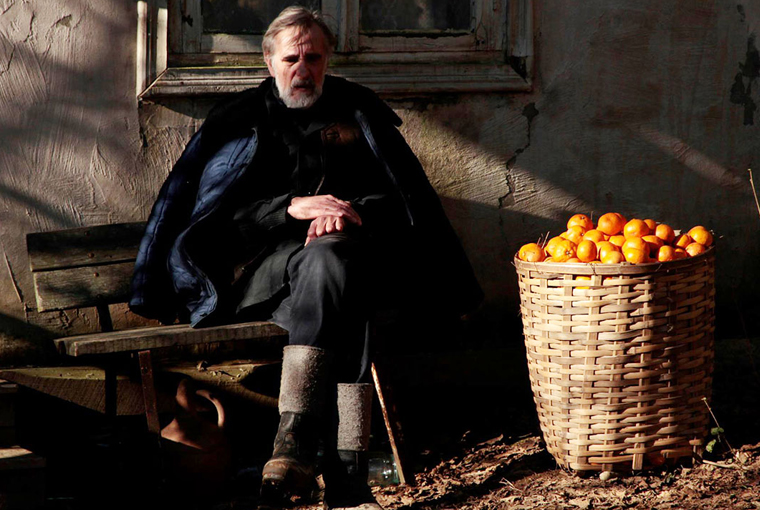 Zaza Urushadze’s Tangerines (Mandariinid) doesn’t go the way we expect, at least in the first half-hour. In a lush, cold-looking forest, a grandfatherly ethnic Estonian is called from his little workshop where he is slicing wood. His unexpected visitors are two brawny Chechen mercenaries, Ahmed and Ibrahim. Ahmed interrogates him briefly. He speaks almost politely, at any rate without malice, and the Estonian answers without fear. What is an Estonian doing in Abkhazia, where Abkhaz separatists and Georgians are killing each other? (He lives there.) Is he making bombs? (No, he’s making crates for tangerines.) Does he have any food? (Yes, it’s in the house.) The act of coercion is casual but unmistakable. As Ivo, the Estonian, gets into the soldiers’ jeep and they drive to his house, worrying possibilities loom. Are we about to watch an explosion of military sadism inflicted on this endearing old man? After all, the film is set in the middle of the Abkhaz-Georgian conflict, an era of ethnic cleansing, pillage and torture.

In fact, Tangerines is a work of almost startling optimism. As we will see, Ivo dominates his little patch of land, where he and his neighbor Margus are trying to harvest a tangerine crop before the front swings their way and destroys everything. All the other ethnic Estonians have long since fled to their ancestral land. Margus only plans to stay until his harvest is finished, but Ivo cannot be dislodged. The actor Lembit Ulfsak does indeed have an air of reassuring permanence that grounds the film’s message of hope.

The Chechens leave with a loaf of Ivo’s bread and Ahmed’s masculine salute: “I’m sorry that brave men like you get old.” Minutes later, Ivo hears shots and an explosion and runs onto the road to investigate two blackened and bullet-lashed ruins: the soldiers’ jeep and a van full of Georgian soldiers. Ahmed has survived and, helpless, is carried back to the house. When the two Estonians go stoically to bury the dead, they discover that one Georgian is still breathing, though badly wounded.

What follows is a grimly sitcom-worthy situation: two mortal enemies who have killed each others’ friends are forced to recuperate in the same home, while any hint of the Georgian soldier’s presence to the Abkhaz militia will probably mean execution for all. At first, the Estonians manage to keep the two separate, since Ahmed can’t walk and the Georgian is unconscious. Once the two have been nursed more or less back to health, only Ivo’s fearlessness, good humor and endless cups of mediational tea will keep them both alive.

The film has unshakeable faith in Ivo’s fair-minded authority to create a haven with its own life-savingly rational rules. Equally, though, the Chechen mercenary and the Georgian soldier turn out to be fiercely devoted to ideals of honor. Their debt to Ivo reins in their mutual hatred, which is gradually worn down by the wearying idiocy of trading ethnic slurs while sipping tea in a charming Estonian cottage. The relative realism of this outcome is not really the question: Tangerines is practically a fable. The moral: the desire to cultivate something good is worthwhile – even when it’s all destroyed in the end.

If the tragedy is inevitable from the start, the choice of heroes and villains is a little surprising. The only Georgian in the film, Nika the soldier, is a sympathetic but comparatively peripheral figure. Ahmed and Ivo form the more interesting bond. Ivo is at home on the land his ancestors may have owned since the establishment of Estonian enclaves in the 19th century. But he is seen as a foreigner and will soon be the last of his kind in the Abkhazian wood. Ahmed (played by Giorgi Nakashidze with steely humor) is acutely conscious of his “difference” and eager to perceive slights to his honor as a Chechen, but he also quickly responds in kind to Ivo’s trust and good sense. Both recognize the outsider in one another.

The sudden outbreak of atrocity is an absurd rupture of Ivo’s fragile domain. Barbarity, in the form of a group of drunk, apparently Russian paramilitaries with no clear idea who they’re fighting, dashes any trace of rationality. Ahmed and Nika’s violence, too, has only lain dormant. Urushadze has insisted that the identity of these bigoted annihilators of reason is open to interpretation and not a geopolitical statement.1 At any rate, the film was made too early to be a comment on the Ukrainian crisis. Still, the catastrophic ending stands as a warning about the instability of peace and its vulnerability to chain reactions of uncomprehending machismo. 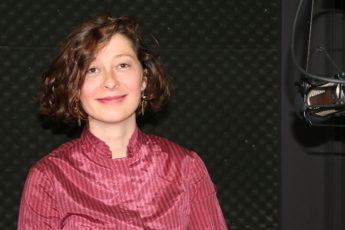 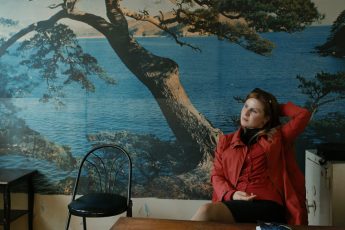