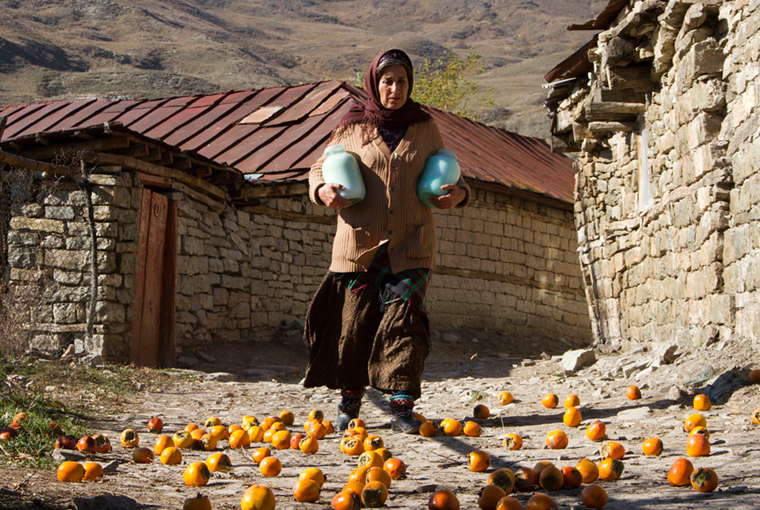 Elchin Musaoglu’s Nabat is set in a small mountain village during the Nagorno-Karabakh War in Azerbaijan in the early 1990s. Although the war mostly takes place off screen, the film shows how it affects the life of a middle-aged peasant woman Nabat (played by the Iranian actress Fatemah Motamed-Arya). Nabat lost her son in the war and has to look after her sick husband Iskender (Vidadi Aliyev) in their small house located above the village. Both grief and caring for her husband seem to be full-time jobs. They force her to make long journeys down to the village, where she sells milk from their one cow, and where she can pay her son’s grave a visit. But one day, upon descending to the village, Nabat finds that her fellow villagers have abandoned their homes. Leaving behind all their belongings, they must have fled in a rush. She decides not to tell her husband and continues her routine.

Nabat’s solitude gives Musaoglu and his main actress time for a moving character study. At first, the herculean task of perseverance depicts her as a strong, steadfast woman. She seems to be able to run the village on her own. We see her harvesting potatoes, washing, cleaning, and cooking. Slowly, however, the growing physical exhaustion wearies her soul and she begins to add stubborn rituals to her daily chores. When she places oil lamps in the abandoned houses at nights, one wonders if she, too, wants to believe that she is not alone. Thus the initial conflict of physical fatigue slowly turns into one of psychological stamina. Musaoglu aptly shows his main character emotionally surrendering to the adverse effects of war.

Musaoglu uses realistic art-film techniques to tell Nabat’s story. Countless atmospheric mood shots of an impressive mountainscape and still lifes of her personal belongings and of agricultural objects complement the already contemplative character portrait. But although a central aspect of Musaoglu’s story is to show how Nabat psychologically deals with her environment, the film never quite manages to blend outer and inner worlds visually. Perhaps more dialog or a change of scenery in accord with Nabat’s own character development would have made it easier to understand the meaning of these rather lengthy sequences.

In a way, these picturesque nature shots also distract from the plausibility of the story. While abandoned villages were common during the Nagorno-Karabakh War – the most extreme example being the ghost-town Agdam which used to have 40 000 inhabitants – it seems unlikely that nobody would have told Nabat about leaving or that she would not have noticed anything at all. Indeed, the fact that the director chose to depict the experience of being left behind from the point of view of a single individual does not reflect the collective relocation of peoples well. Nor does it adequately dramatize the sacrifice of those who are too weak to leave. Instead, Musaoglu gives the impression that ethnic persecution is an affair which leaves everyone to themselves. It is not surprising that Musaoglu uses the metaphor of the lone wolf towards the end of the film, juxtaposing the forsaken animal with his main character. Did it not occur to him that wolves, like humans, are gregarious animals?

While commemorating the experience of this war is in itself a noteworthy gesture, the film’s highly individualized story-line, the indistinct setting, as well as the overly artsy cinematography (Abdulrahim Besharat) give the impression that Musaoglu cared little about the specific life, culture, and history of the people of Nagorno-Karabakh. Indeed, if it were not for the few dialogues, the film could have very well played, say, in former Yugoslavia. Musaoglu thus confuses the roles universality and individual experience play in historical storytelling. Instead of looking for universality in an individual experience, he individualizes a universal experience. That is why Nabat, for all her stubborn loneliness, never feels like a real human being, someone shaped by and shaping a community during a specific time in a specific place. Her existence is as eternal and empty as the beauty of the landscape surrounding her.