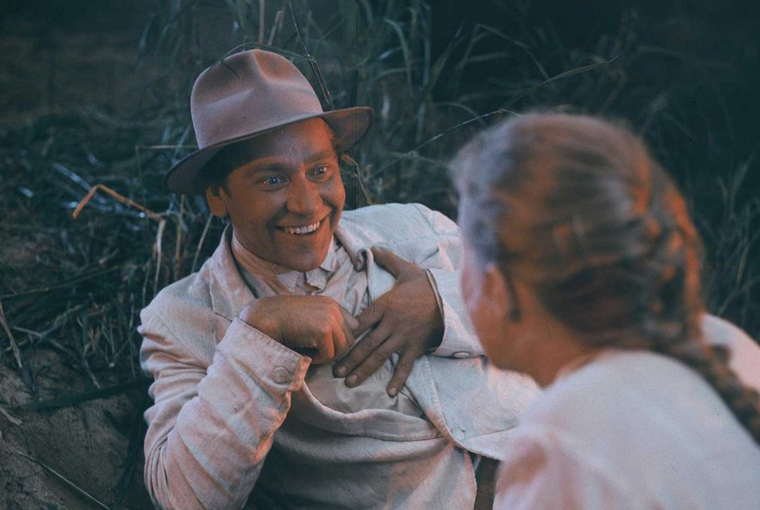 The 1983 Estonian film Nipernaadi tells the story of a grown up Huckleberry Finn. Nipernaadi strolls the country living other people’s lives, moving on whenever things get too close. Like Huck Finn, Nipernaadi is also a great liar. In the film’s first episode, this gift turns him into the owner of a farm, and makes him the husband of a beautiful wife. Before, he told the owners of the farm – three boys whose mother just died and who inherited the property – that he is a distant relative of theirs and that it would be much more fun for them to try their luck in the city. He then goes into raptures about opening a movie theater in town, and since the boys are not so keen about farming anyway, they just give him the property. But soon they are back. Reality didn’t turn out as promising as in Nipernaadi’s tales, so they blame it on him and burn down the farm. Ironically though, it was only this experience that awoke in them the responsibility for their heritage. Had it not been for Nipernaadi and his fable, they would have probably ruined the farm. Now, even though they burned it down, they will also rebuilt it.

Nipernaadi, like many film heroes – from Clint Eastwood to Amélie Poulain – is a secret improver of other people’s lives. What seems to be at first as the trip of an egotist in the search for adventure, soon turns into a philanthropic pilgrimage. Nipernaadi’s don-juanesque appearance is just a disguise. He never ruins anybodies lives and instead of craving for revenge, the women Nipernaadi encounters, are thankful after they meet him.

In the episodes following the farmers, Nipernaadi thus liberates a young woman from a marriage to a dismal priest, and happily marries another woman to a rich farmer. Here, as in the first episode, Nipernaadi is like a fantasy, realizing other people’s dreams without being a part of them. Only the last episode is more ambiguous. Nipernaadi’s last stop is at the sea shore. He finds shelter in a little hut in a landscape resembling the end of the world. The hut belongs to a black-haired beauty called Maret Vaa and to her father. When Nipernaadi meets Maret, he immediately falls into his routine inventing a story about himself being a sailor in the wait for his ship to cast off. But Maret doesn’t believe him, telling him straight away that he is not what he pretends to be. She is the only one who refuses to be absorbed into a fantasy.

Maret has her own fantasies. Like Nipernaadi, she prefers to tell stories instead of looking for their realization in life. They spent nights competing against each other’s ability to invent stories. This makes them different from everybody else. While all the other characters also believed in dreams, they never doubted that these dreams could be turned into reality (the three boys and wealth; the first young woman fleeing from her fiancé; the second young woman marrying a man with property and cows…). Maret like Nipernaadi doesn’t care for dreams to become true. In fact, Nipernaadi would probably think that the reality of the people whose dreams he realized is deceptive. That is why he leaves them the very moment their dreams come true.

The end of the film is almost surreal. A black car from the 1920s approaches the hut and a woman dressed in a black costume steps out of the vehicle telling Maret’s father that she is looking for Nipernaadi. She is the absolute opposite of Nipernaadi, who is dressed in white linen that has taken on a more brownish color by the end of the film. The woman in the black costume is Nipernaadi’s his wife. She then reveals his true story. Nipernaadi really is a well-off guy with a fixed home. He only leaves his headquarter in the Summer. His talent for storytelling is also explained. Nipernaadi is a writer.

When Maret finds out about all this she is profoundly deceived. Again, all the other women would probably be happy to have found out the truth, but Maret, being the only one who actually believed in Nipernaadi own dream – the dream of telling stories – is as disappointed as he is, when it is time to leave. But if, like for the other women, Nipernaadi’s leave has a positive effect on her, then she might wake up, and like Nipernaadi, write down her stories. This extremely sober ending, a kind of anticlimactic coup de théâtre, is nonetheless the crucial point of the film. It saves Maret’s and Nipernaadi’s encounter from turning into a never ending story, while at the same time providing the condition for their stories to go on…