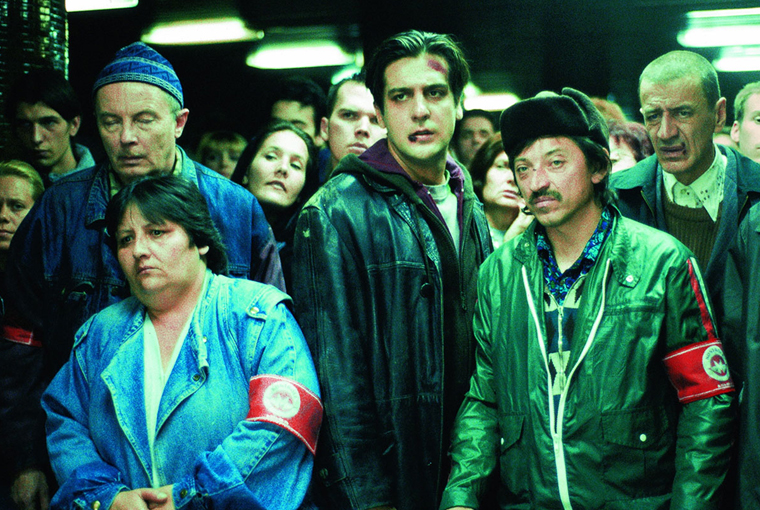 In a dystopian rendition of the Budapest subway, a crew of ticket checkers struggle to fulfill their duty as they face a world of obstinate and resilient commuters. Bulcsu, head of the team, is also troubled by a series of murders that happen on the tracks: a mysterious man in black is pushing people off the station platform. Our protagonist repeatedly winds up at or near the crime scene at the time of the crime and is soon suspected of the murders. To set the record straight, he must catch the criminal.

Sounds straightforward? It is. While the setting and style of the film are certainly unusual, it’s hard not to recognize the typical cop film in Kontroll. There is the grumpy boss who favors our protagonists’ corrupted rivals, heartless bureaucrats who shut their eyes on Bulcsu’s decency, and comic conversations about trifling matters. In line with the U.S. cop movie, Bulcsu is even asked to return to his old job by an ex-colleague who appears in the subway one day (though Antal doesn’t elaborate on Bulcsu’s former occupation, we do find out that he was the “best” in his field) while the romantic tangent is hardly a genre-breaker. Bulcsu’s crew consists of clowns, a veteran, and a newbie, and we witness him challenging a co-worker to a dangerous and illicit off-duty competition. It’s striking that critics from the US and Europe alike addressed the weird climate and the anarchic wickedness of Antal’s universe rather than his acceptance of genre formulas. Unusual on the outside, Kontroll’s core reeks with conventionality. If there’s one accomplishment that Antal should be credited with, it’s making a conventional movie (which includes chases and mass scenes) seem special and artsy.

For Hollywood standards, Kontroll might still be fairly original – it is compared to Antal’s other films, which were all shot in the US. Vacancy, his first US-produced film, is a modern-day horror film in which a couple is forced to spend the night at a desolate motel when their car breaks down. After causally irrelevant aberrations and a tiring build-up, David and Amy find out that their lodge is in fact a place of snuff film production and that they are about to star in such a film as victims, with the rest of the film dedicated to their struggle to escape (everything from Cronenberg’s work to Hostel can be quoted in relation to this); a notable curiosity – perhaps the only truly unique element of this film -, is the fact that the couple’s horror trip is actually presented as a therapy for their crumbling marriage. In 2009, Armored followed, in which a security firm officer and ex-G.I. agrees to take part in an inside job (this piece features many resonating Made in USA lines like “Me and You – What’s the Difference Between Us?”). Finally, Antal was hired in 2010 by B-movie filmmaker Robert Rodriguez to direct the latest installment in the Predator series, which, like the rest of his American films, has a title that comes close to summarizing the plot: “Predators“.

There is no way around polemy when speaking of Antal’s body of work. One of the few stylistic features that connects all of his movies is a curtailed third act which usually consists of a single, scant scene – a pattern caused by the one-dimensionality of his characters. The veteran troubled by moral concerns (Armored), the overly critical wife (Vacancy), or the cold-blooded Black Ops fighter (Predator) lose their relevance as soon as the story is resolved: devoid of genuine humanness, these characters don’t function outside of narrative formulas. Still, I can’t help but think it’s the commercial environment that has stripped Antal of whatever artistic flair he used to have. Most likely, Hollywood’s scouting in Europe mainly aims at bringing in “auteurs,” i.e. filmmakers who are both respected and skilled. In theory, the existence of a directorial trademark should guarantee better box-office exposure and high-quality films. In fact, this logic has worked wonders in the past (see Forman, Polanski), and with Kontroll, Antal proved that he’s a dedicated craftsman with a noteworthy stylistic adroitness. But the film doesn’t have the precocious maturity of Knife in the Water, and it’s worth asking whether a mainstream industry is the right place for an artist to grow up.

In this journal, we have often argued that art house cinema tends to be as conventional as mainstream culture, but there is at least one crucial difference: the former works according to unwritten rules, whereas the latter celebrates and reiterates its explicit conventions (needless to say, the former hence produces the artistic climate where creativity and singularity are likelier to proliferate). Reading the prescriptive work of screenwriting gurus Robert McKee and Syd Field says as much about Hollywood’s uniformity as does the descriptive theoretization of academics and critics. In Europe, stylistic uniformity is due to a complex cocktail of artistic, cultural, social and financial factors. In Hollywood, it’s what the studios dictate. And it’s here that Antal’s originality and uniqueness have been soaked up by formulas and genre-theory as his affinity for the “American” way of story-telling has turned into a fundamentalist subscription to all of its principles.