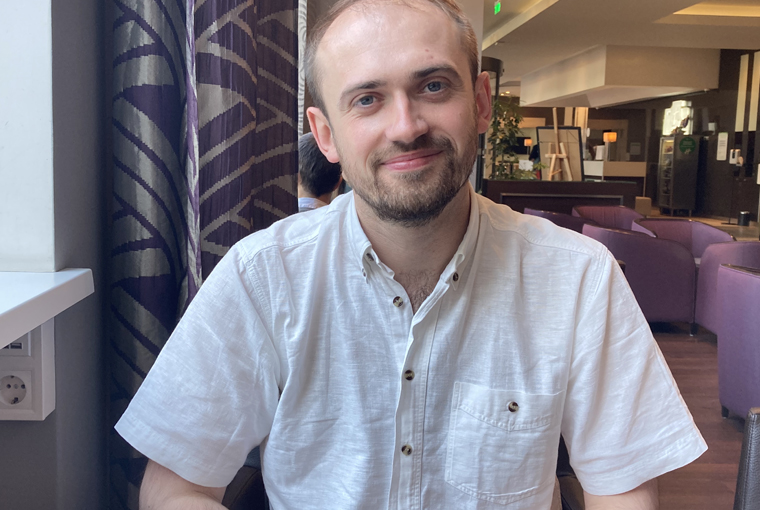 We met Aliaksei Paluyan during the Molodist Film Festival in Kyiv (May 29-June 6), where he presented his recent documentary “Courage”. The film follows a free theater group in the context of the Belarusian protest movement. Paluyan speaks about his film’s aesthetics, its making, and its politics.

When did you first come across the Belarus Free Theater?

At the beginning of 2011, when I was a student in Minsk. The theater was located in a very small house in the middle of Minsk, and it was a forbidden place. It was a crazy feeling to visit. A lot of people said to me, “It’s the Belarus Free Theater, you should keep in mind that you need to take your passport, because last time the police came and took everyone.” I was so surprised and so excited. It was very interesting. I went there and I was shocked and in awe of their braveness to work with taboo topics. The play that night was called “Minsk 2011”, and it dramatized the 2010 protests in Minsk. It was inspired by American writer Kathy Acker. It was a very strong piece, very critical and deep but also very visual, despite resorting to minimalist elements. This is also what I myself have tried to do in theater. Less is more. If you have something to say to the audience, that stands. You don’t need many props, you will find your way to the audience. It became clear to me on that day in 2011 that the role of the artist is to be honest with yourself and your audience, and to be curious.

After that I moved to Germany and studied there. In 2018 I decided to make this film. I wanted to find out for myself what the role of independent artists can be in authoritarian countries. Is it possible to be independent, or is this just a romantic idea? I still don’t have an answer to this question, I only understood that the price is too high. Denis and Pavel, the two main actors of the film, were detained, released after 15 days, and then decided to move to Kyiv. The third protagonist of the film, Marina, also escaped last year. She took the last flight from Minsk to Kyiv after the Ryanair incident.

How did you establish contact with the Belarus Free Theater?

It was easy. The artists are so open. I first approached Denis and he was very open with me, even being open to sharing information about his work. Unlike some younger artists today, they aren’t worried about showing people that they are great or special. I told them I wanted to do a film about them, and they said okay. From the end of 2018, I first started coming to Minsk. At first, I came alone with a camera, to just do research. I really split my time between Germany and Belarus. But because of the film, I can no longer live in Belarus. I’m now on a list.

Did watching the process of creation used by the Free Theater have any influence on the way you work?

Yes and no. There is something interesting about our Belarusian culture. Maybe you know Svetlana Alexievich. We have this culture which wants to be very precise and very open. For example, Alexievich works with people who experienced the big traumas of Soviet times, for instance Chernobyl. She talks with them and writes about it. It’s not fantasy, it’s the truth.

The Free Theater does something similar: while I was working with the theater, they were working with the wife of a kidnapped politician. And this wife shared her story with us, very honestly and openly. It’s a way of trying to bring something authentic and true to the public. It’s kind of my style as well. I prefer to observe and not to manipulate my audience into accepting what reality is supposedly like. I give the audience room to discover their own point of view. I call this documentary.

Has living in Germany changed your way of seeing the world?

No. I was young when I moved to Germany. It’s helping me right now though, because I look at Belarus from a distance. I can see it from another angle. I’m not totally emotionally caught up in what’s happening.

It was very dangerous when we were filming, and I decided to smuggle the material out of the country to move the project to Berlin. I decided to edit the film and do everything I could to finish as soon as possible. This distance has also allowed me to test the reaction of Westerners towards the film.

Did the authorities know that you were making the documentary?

I don’t know. We were taking a huge risk. My DoP, Tanya Haurylchyk, is still in Belarus. I would like to promote the film as vocally as possible, but it’s a huge dilemma for me because at the same time I know that people in Belarus can be held as hostage. All the actors are in Kyiv right now, so at least they are in a safe place.​1​ But Tanya is in Belarus. I said to her, “let’s think about you coming to Berlin”, but she wants to stay in Minsk. She said to me that she’s a grown-up, that it’s her decision. That is of course true, but it doesn’t help me because she becomes my responsibility. A documentary filmmaker has a responsibility towards his team. I bought her tickets from Berlin to St. Petersburg after the screening. We’ll have to see how the authorities react. Sometimes you’re lucky and no-one comes to knock on your door for two or three weeks, then they suddenly do. There’s no logic to it.

Did you consider abandoning the project at any point?

Belarusian people are very depressed, they need to think about how we can live at the moment. There are so many unanswered questions. It helped me to always ask myself why I was making the film. The price is so high. Three protagonists left the country. Not only because of the film, but for many reasons.

Another problem is that society is very divided at the moment. 50 percent are on the side of the regime. And propaganda uses this division against the people. For artists, this is a terrible thing because art should connect people. It takes so long for both sides to come together. Look at Germany. It’s been 30 years since the wall came down and they still have problems between East and West. In my opinion, what will happen with Lukashenko is a question of time. Last year Belarusians showed what they were capable of. Courage is also about this: about who and what we are as a people, as a nation. The protests got so huge last year.

Are the protests still going on?

Not really. It’s gone back underground. It’s actually a very interesting transformation. I tried to show this in the film. How there are two levels, two societies. The underground one of artists – they do performances in garages, in lofts, in old factories, it’s very lively. People actually want to go to these places. And then there are the authorities, the streets, this Stalinist architecture. It’s sterile, too clean, without life. The artists want to speak about everything, especially those things that are not addressed in the open. They are saying: this is enough, the authorities are abusing us. For me courage is not about being a hero, it’s about doing your work, doing your art despite the situation. It is about being active through this fear.