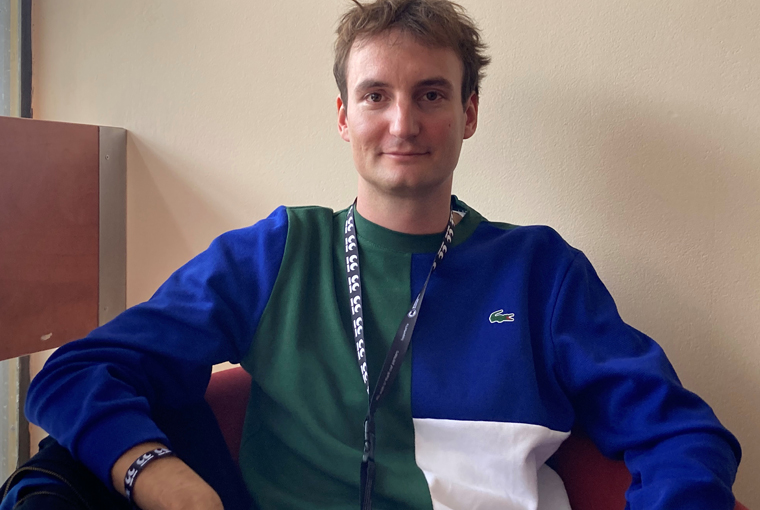 We met Olmo Omerzu during this year’s Karlovy Vary film festival, where his “Bird Atlas” screened in the main competition. Omerzu speaks about the phenomenon of catfishing that is at the heart of his film, and reveals how he approached it from a cinematic perspective.

How did you write the story of Ivo, the older male character in the story played by Miroslav Donutil?

I played around with writing the story from different points of view. Finally, I decided on this triple perspective because it was a nice balance. With Ivo it wasn’t difficult because scriptwriter Petr Pýcha adapted the language to the character very well. He’s very fascinated with how people speak, and he always writes down the dialogues he hears. My focus was on the topic of control and of losing control in one’s own life. I have this feeling that I need to have control over certain things. I know it’s better not to try and have this control. But it really fits the character of Ivo.

What about Maria, who is played by Alena Mihulová?

I read an article about a woman who was catfished in the Czech Republic. It was a German company, and she defrauded an amount two or three times larger than in the film. But what was more interesting for me was that when you start reading about this type of fraud, you realize that it’s a kind of phenomenon, it’s not just one naive woman who was catfished. The people who catfish pose as American soldiers who are fighting somewhere abroad, usually it’s Afghanistan. It’s kind of a 19th century situation trapped in a digital world. A woman is trapped, waiting for someone to come home from war. They are always emailing each other because he is somewhere abroad fighting, so he can’t talk, and he can’t call. I think this writing thing is very important because it’s more deeply connected to the underlying love and the topic of how Maria perceives emotions. She’s always going back to the letters. It was very difficult to find a way to portray it, because it’s such an inner type of drama, it’s very abstract. It’s very hard to communicate with the actor.

What was Maria’s motivation? Do you think she really fell in love?

Yes. And that’s why it’s so important that their love story unfolds through letters. Because you avoid the physical side of it. The whole film is the portrait of a generation. It’s the portrait of people who are actually not coping very well with the general situation. Everything is changing around them. This is very much connected with our world. For us, we are younger, and we can easily adapt to it, but for them it’s very much an abstract thing that they can’t understand. This phenomenon is happening every day. It’s a portrait of loneliness. For me it’s really a phenomenon, not just something that’s happening this one time. I realized and thought to myself, “Oh my god, their loneliness is so much deeper than we can imagine”.

Did you meet any women who had experienced this themselves?

Not to such a dramatic level, but there was this woman I met who had had a relationship for half a year, but she didn’t send any money in the end. The actress started searching around for stories among her friends and she was very surprised to realize that she knew people who had sent money to people online.

It also works in the opposite way, but it’s not so common. When you work on your computer for half a year on a specific topic, you start getting reactions. Our producer got an email from a female officer with the same type of story. I don’t think men fall for this kind of thing in the same way as women do.

Why do you think it’s less common among men?

I don’t know but what I’ve heard is that old people, older men, are usually more attracted to something financial, like “I have a great deal for you”. In our film there are two types of characters. One is represented by a kind of pragmatism, a patriarchal, old type of world where money is very important.

Do you talk about women as birds in the Czech language, as you do in English?

This kind of connotation is present, but it’s not the same as in English. There is a different thing. Actually, “pták”, that is the word for bird, also means penis, kind of like saying “cock”. Actually, we were afraid that they would be concerned about this when we presented the film to Czech television.

Where did you get the footage from Afghanistan?

We were working with this licensing firm Shutterstock a lot. It’s more of a playful thing – you don’t necessarily get it as a viewer, but for me it was right because it’s the story of a person who’s preying on a woman with the photos that he’s sending her. He’s using photoshop to fool her. For me, it’s like, “Ok I’m allowed to do this too”. I also picked some of the bird shots and combined them with the shots that we took. In another film I might not have done this, but here it worked in an ideological way because of the subject matter.

Do you think Maria’s character somehow suspected that she was being catfished?

I was reading up about the topic a lot. There are so many cases where the women realize that the man who they were writing to was a fake and knew nothing about it. There is an example with this American guy – a soldier I think. He’s kind of a family guy with nice profile photos, and a happy family. His profile was stolen so many times. Some women even moved to the neighborhood even though they had been told he was a fake. They were still going to try and talk to him every day. It’s something very hard to understand, but it exists. The structure of storytelling is very often too rational, more rational than reality. When you’re watching a film, you want to have all the information that you would like to believe about a certain decision that the character makes. But when you dig into reality, you realize it’s not possible.