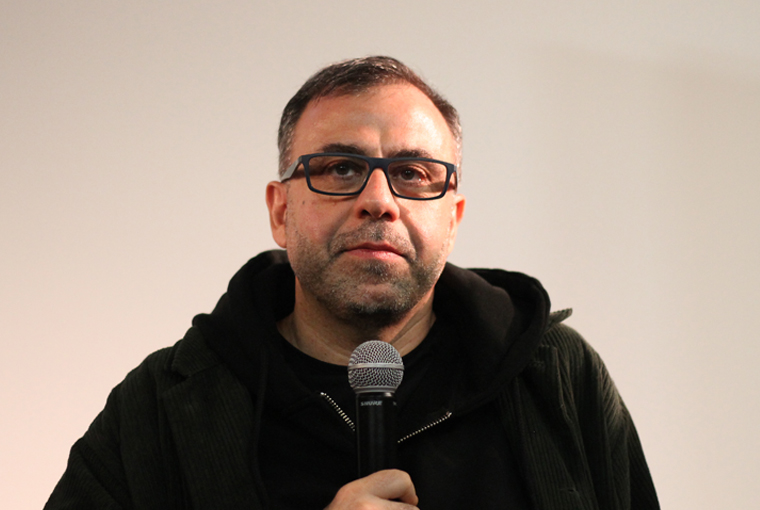 For our September issue, Nina Mdivani met with Dmitry Mamuliya, who discusses the need for a new visual language and the usage of time in his films. Mamuliya is a Georgian-born and Moscow-based film director. His most recent film “The Criminal Man” screened in the Horizons section of the 2019 Biennale.

You are a Georgian film director working and living in Russia. Inside which film tradition do you situate yourself? Is it Georgian, Russian or European cinema?

It is hard for me to say. Obviously, I am influenced by all these traditions, not only by the respective cinematic traditions, but also by the literary ones. If I think about the Russian literary tradition along these lines, I would of course cite Dostoevsky, Chekhov, Tolstoy, Andreev, Shalamov among my major influences. If I think about the Georgian literary tradition that influences me, I would say that some of its non-central authors have been meaningful to me. For example, a Georgian writer called Egnate Ninoshvili. In one of his stories, a mother who has gone crazy fervently plays hide-and-seek with her six children while holding a cooking knife, ready to kill them. It appears to me there are many layers of human expressions that are interesting to look into. But a cultural tradition does not only include a specific sort of content and themes, but also its own language, form, and style. From this standpoint, I feel a closer affiliation with endeavors instigated by the European cinematographers.

Do you detect any new ‘waves’ in Georgian or Russian cinema?

As of now I do not see any new ‘waves’ in Georgia or Russia or even Europe. The cinematic language dubbed as the language of the 2000s has worn off, but the new one has not yet emerged. This concerns narrative as well as plastic forms and characters. We need to look for non-ordinary methods of storytelling and a new language that will coincide with the view of the world that we currently inhabit.

What are the newest European films that are of interest to you?

Among others this would be Albert Serra’s Liberté and his The Death of Louis XIV, Lucrecia Martel’s Zama, and Angela Schanelec’s I Was at Home But.

You say cinema is in need of a new visual language. Why do you think this need exists right now, what underlines this necessity? Why don’t older visual languages work any longer?

The language spoken by any artform changes every ten or twenty years. Themes change, as do the dominant emphases, heroes, and the tonality of cinema. This happens because something in human life also changes. The large picture of the world changes and cinema needs to account for these shifts. If cinema does not adhere to the Zeitgeist it becomes ‘non-living’, stale. At any given point, this definition of ‘contemporaneity’ is very unstable and it is hard to describe it as a feature of reality. For example, when we see a woman in the streets or on the subway, we see how she is dressed, how she moves, how she behaves, how she talks. All of those features create her image, which captures us. This is exactly the wind of time and a film director first of all needs to be sensitive to its vibes. These vibes live in the faces of people, in their postures, in landscapes. They could be captured in forms. Sometimes ‘contemporaneity’ is absolutely present and spoken, but sometimes it is hidden and opaque. Sometimes direct speech lies. Not only in cinema, but even in real life words of love cannot be uttered so that artists and lovers take hidden routes, saying one thing, but meaning the complete opposite.

Some of the reviews for your film Criminal Man describe your directorial approach as ‘subjective realism.’ How would you define it?

I would not want to define what I am doing. Or more precisely I do not know how to define it and I never specifically thought about doing so. What matters in a film is a human being as well as his or her face, no matter what the story is. I mean the human face and its significance as it was perceived by medieval artists. On their canvases we see faces of aristocrats or countrymen – just imagine cinema as an adventure of a human face. That is how I would define my approach. The human face is extended by being transported from landscape to landscape. Something happens with it, its eyes fill up with shadows.

Giorgi Meskhi from Criminal Man, like many characters from your other films, does not belong to any concrete subculture as you have defined it. Is this element of people being outsiders to Georgia, outsiders to – thinking now of The Other Sky – Moscow, somewhat characteristic for the post-Soviet territories and their citizens? When do you think such ‘outsider’ spaces have been developed and when did you become interested in them?

I have always been interested in strangers. I was just reminded of one definition by Heidegger. He used to call Hanna Arendt, “Das Mädchen aus der Fremde” – a maiden from a foreign land. I think this is a very precise definition and it seems to me that all heroes of the literary canon are from these foreign lands. They are pariahs. Such is the fate of Hamlet, Richard, Raskolnikov, Oedipus, Antigone, Anna Karenina, and Emma Bovary. This quality of foreignness envelops them and could be seen in their physical appearance as well as their habits. For example, Emma Bovary is fond of eating unripe fruits and drinking vinegar. Similar people from foreign lands live among us. They have clouded, disinterested gazes. When we talk to them, they appear to not fully be present with us. Although they are half-way there, part of their being is somewhere else. Those were the strangers I was looking for. They have a particular appearance, gaze and posture. Even when they smile or laugh, they seem as though they were doing us a favor by descending to our world down here, by playing by the rules. And through their laughter one can always sense a missing note, from their ‘absence’ here and now you can extrapolate their oppressive presence ‘there’, in a land foreign to us.

The heroes of my films are people who do not partake in the mainstream culture of their societies, but belong to the ‘outsider’ segments, either economically or socially delineated from the rest, lacking any national or ethnic qualities. They do not necessarily live in ghettos, but do not belong to ‘Georgia’ or ‘Moscow’ as the public thinks of these two localities. For these people historical time has stopped, and their lives evolve based on other needs, irrelevant to the main society. You do not see them portrayed by the mainstream directors because standard instruments of filmmaking – professional actors, exact screenplays etc. – would not catch their ‘otherness.’ This is the precise reason why most of the actors whom I chose are not professional actors. On the contrary, they are not interested in participating in the conventional film industry. For example, when I invited Giorgi Petriashvili, the main actor of The Criminal Man, to attend the Biennale, he refused, saying that he is not interested, and probably I would not have chosen him had he been interested in doing such things. When you work with non-professional actors you need to be careful to let them do what Heidegger termed existing in ‘Dasein’, to show to the camera who they are because they would and could not play it.

What is the main goal of your heroes, or rather, what is important for you to show? Are you attempting to show their spiritual catharsis or, on the opposite, a regress, a degradation? As far as I know, Herman Hesse’s novel Demian is important to you. One notion mentioned there is “Cain’s mark”. In a way, for Hesse this notion signifies a mark of being different as well as a hero’s process of self-discovery to understand this mark in himself. Is this of importance to your process?

I never position my questions in terms of achieving particular goals. And in general, I do not like people who have specific goals. I prefer people who do not have specific objectives, people who are lost, kicked out of the flow of life. Searching for one’s self does not happen in a thought-through, conscious way. It’s an act of wavering, a hysterical act of wavering. Imagine placing a rat in a closed space: it will start running around, bumping into walls, searching for an exit. A human being does the same thing. I am interested in heroes who happened to be caught in closed spaces in life and am interested in their chaotic wavering from this standpoint.

What role does nature play in your films? For example, in The Criminal Man the green open field almost carries a sacral meaning for the main hero.

I wouldn’t say that nature is important, but landscapes. Landscapes have the same meaning as  human faces. For example, for Tolstoy, nature and its elements always coincide with the spiritual being of the hero. I meticulously chose landscapes because for me they are part of the hero’s soul.

Do you see yourself more as a storyteller or as a creator of images?

I think that these two matters are inseparable. For me the story is very important, and this is exactly why I am always in search of novel narrative structures. Besides the simple link of cause and effect there are other fields to consider. One can tell a story in a sequence, by highlighting clear motivations, but it is also possible to create original structures. The big picture and the world of images have an even bigger significance. A film could be perceived as a painting stretched out in time. If, in a painting, objects are positioned in the foreground, middle ground, background, and so on, in one single dimension, one could imagine that a film is a canvas stretched out on one line, developing in time, parts of it accumulating on the memory membrane that come together as a puzzle would. A viewer who is used to looking for causes and effects can stay cold-hearted when it comes to the development of such a painting. He or she will get lost in search for the logic. But imagine that a film is a painting of the world produced by one not very healthy psyche.