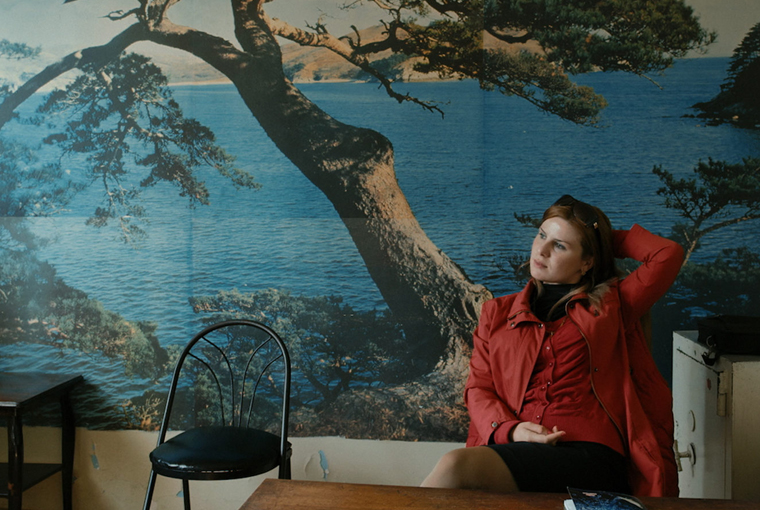 Salomé Jashi has been documenting contemporary Georgia for over a decade, in a series of short documentaries that have gradually been edging towards feature length. At seventy four minutes, The Dazzling Light of Sunset is Jashi’s longest and most ambitious film yet. The two protagonists, whose presence links the otherwise diverse scenarios that comprise the film, are Dariko and Kakha. Dariko is the only journalist at Jikha TV, a small local station that serves the town of Tsalenjikha in Samegrelo, while Kakha is the channel’s all-purpose production manager. Dariko roams the surrounding villages covering stories for the channel, in the process revealing a brimming fresco of modern Georgia.

Bakhmaro (2011), Jashi’s last film, was an exploration of empty waiting time that has as much in common with the slow cinema movement as it does with documentary. That film was delicately slow, abstract and deliberately fragmented, giving us small pieces of the puzzle but never establishing the bigger picture. The Dazzling Light of Sunset builds on these techniques but focuses on two distinct protagonists. This allows it to show not only the ennui of waiting that seems an integral part of life in contemporary provincial Georgia but also the excitement of public performance, the painstaking processes of politics, the meticulous routine of TV journalism and the clamor of daily life. Having worked as a TV journalist in the early part of her career, Jashi’s enthusiasm for her subject is palpable in every carefully framed shot, as is her arch sense of humor.

The opening scene sets the mood perfectly. The camera, high up in the rafters of a semi-derelict building, tracks laterally, as we see tattered curtains gently fluttering. A mournful song, Chanamgheri, starts up, and as the camera continues to move a two-row audience comes into view followed by a four person singing ensemble. It is a beautiful and strange introduction to the world of Dariko and Kakha, taking place at the crossroads where the sublime, the ridiculous, the uncanny and the quotidian all meet, where the pair use their diligence and enthusiasm to magnify small-scale events in run-down settings for their community.

Subsequent scenes follow a man who has captured and tamed an owl; an enormous party in which teenagers dance to Gangnam Style while other revelers feast on whole roast goats from long tables piled high with food; child models strutting on a catwalk under the critical eye of their director; and Dariko diligently camcording dull local government meetings in which functionaries read dry budget statements. Many scenes focus on public performances and pageants. Here the performers present themselves doubly to Jikha TV and to Jashi’s camera. The stated mission of Jashi’s production company Sakdoc Film is to capture aspects of Georgian culture “before the opportunity fades away” in the transition from a post-Soviet state to a self-consciously European one. It seems appropriate that she would focus on the potential of the mass medium of television to preserve and represent traditional culture where usually it is passed over in favor of mass entertainment.

The film ends on a frank interview with the two protagonists, in which they air their fears and reservations about the film, questioning Jashi’s motives in filming run-down buildings rather than the tourist sites they are proud of. This, they claim, as Dariko nervously texts on her phone, would better represent modern Georgia to the audience in Western Europe. Maybe Jashi, having focused on the more unpalatable aspects of contemporary Georgia in the past (such as the ultra-nationalist youth camps that were the subject of her 2010 film The Leader Is Always Right) is self-reflexively commenting on the reputation of Eastern European documentary makers for focusing only on negatives with this parting shot. Perhaps, in such an assured and scrupulous example of documentary, Jashi wants to end by foregrounding the agency of her subjects. For a few uncomfortable moments the audience, having vicariously taken advantage of Dariko and Kakha’s hospitality to explore Samegrelo at close quarters, may feel under fire in Jashi’s place. 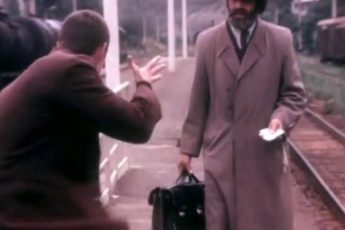 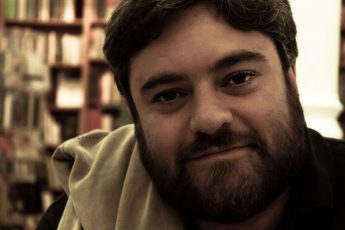 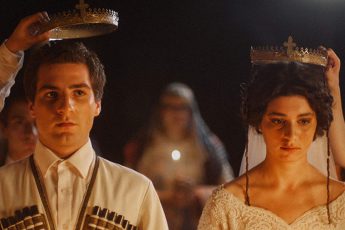