Redrawing Postcards from the Past 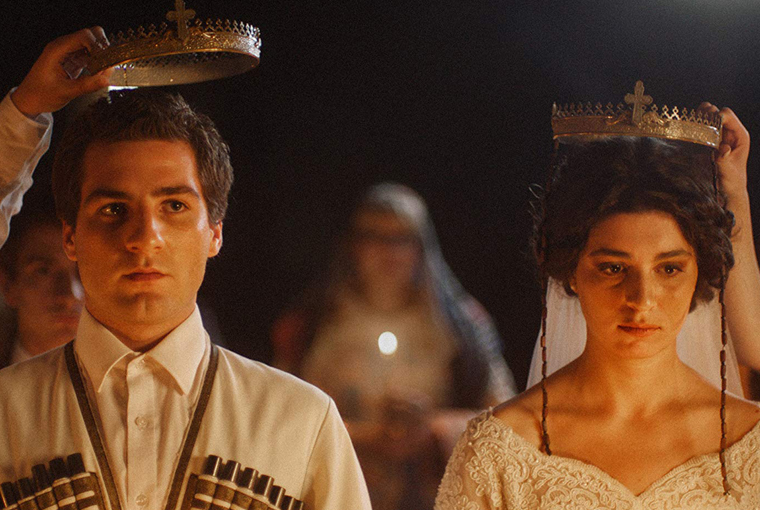 The affinities between dancing and loving are sufficiently obvious to have earned a firm place in our public imagination. As primal forms of bodily expression, both activities carry an immediacy that makes their depiction – in conjunction or separately – universally communicable. In this respect, there is nothing particularly revolutionary about Levin Akin’s story of two professional dancers falling in love with each other. Where should the heart venture but towards bodies following the same rhythm as yours – day in and day out, from elation to exasperation and back? In Georgia, where the film is set, however, the stool-slinging mob that left its ugly mark on recent history by violently crushing a 2013 anti-homophobic rally, objected to that question, at least when posed rhetorically. For where many Georgian men are certain the heart can most certainly not venture, is towards a same-sex dancer, which of course happens to be the very constellation Akin depicts. And so offended patriots took to the streets on the day of the film’s Georgian premiere and caused a scene, though the fact that the police intervened rather than watching as passive by-standers (as they had done in 2013), meant that the film screened anyway.

That great cultural clash, which attracts a lot of Western media attention whenever it flares up somewhere across Eastern Europe, is not the only reason why And Then We Danced is traveling the festival circuit with presidential bravura. Swedish-born Akin’s return to the place of his roots is also very fun to watch. The film has been criticized by some for being a notch too cheesy, and it is true that Akin knows every trick in the book when it comes to depicting the budding love between his two male protagonists. We are presented with colorful sunsets, awkwardly tense silence, moments of infectious joy, and cathartic setbacks. But the film is a love and coming-of-age story revolving around dancers, and I dare you to name a genre context where the melodramatic registers would be more suitable. In Akin’s story, we watch bodies speaking to one another, so why not interact with the audience through body cinema?

If there is anything that offset me on a purely experiential level, it is the neatness with which Akin resorts to his stylistic registers. In the opening scene, when we are first introduced to the world of Georgian dancing which lends the film its shapes and forms – trust me, it is literally minute one, you’ve just put your mobile phone on silent mode and are wondering who that person is who has to sit down right in front of you –, Akin already lets the choleric ensemble choreograph lash out at the performance’s subliminal sensualism with the words, “There is no sexuality in Georgian dance”. Was it really necessary to establish this fact through expository dialog in the beginning of the film, I wonder? This didactic touch hurts Akin’s film, but as the beautifully believable characters of his film start coming to life, things do fall in place. The star of the show, both in terms of character depth and performance, is Merab (Levan Gelbakhiani), an intense personality who brings immediate energy to the screen both through his dancing and glow. Like all professional dancers, Merab lives a thoroughly regimented life that is structured around his passion. His girlfriend Mari (Ana Javakishvili) is also his dancing partner, whom he dates in the little spare time that he has at his disposal. But when Irakli (Bachi Valishvili) joins the ensemble’s rehearsals as a replacement, Merab distances himself from Mari and engages with Irakli – first through their rivalry for a free spot in the senior ensemble, and then through an affection he finds is not just platonic.

One of the key aspects that make this film enjoyable to watch, is how astutely Akin depicts the gradual process of falling for someone. Due to the specific political context in which Merab falls for Irakli, that graduality is further magnified, without guarantee that there will be any consumption, let alone a happy ending. In the beginning, as Merab starts to feel something for Irakli, we do not know what it is; when we begin sensing attraction, we do not know that it is mutual, and so on and so forth. By playing with such carefully portioned hints and shifts, Akin makes sure the viewer stays on the edge of the seat (so long as she is ready to give in to the naïve but potent magic of melodrama).

But as the film progresses, it turns out that what the film must primarily be defended against is not its melodramatic indulgence in the joys of early love, but its replication of the very clichés whose usurpation by homophobic reactionaries it seeks to challenge. Forget the Georgian dancing, which is after all the profession of the two protagonists. What is truly horrible, is that the film is rife with all the colonial signifiers a Soviet-born tourist associates with Georgia and its capital Tbilisi: Georgian dumplings, Georgian singing, traditional feasting, traditional weddings, Italian-style verandas, pointless brawls – even Graeco-Roman wrestling appears in a moment of intimacy. And while all of these things are supposedly sublimated by the illicit love between Merab and Irakli, one wonders what would remain of the film’s progressive potential when you subtract the illicitness from the love. What Akin is after is not to deconstruct clichés, but to widen them so that they become sufficiently inclusive to accommodate gay people. And here the question becomes if patriotic signifiers are stupid as long as they exclude minorities, or stupid full stop because they are empty signifiers whose purpose is to create national identities which are inherently exclusive, stretch as much as you will. The sad thing is that Akin’s film would have worked without the Georgian dumplings, and that he included them anyway because he either thought he needed them for context, or because that is what the festival circuit expects from Georgian entries. Either way, the film joins the long list of films which will pass off as progressive because they are progressive enough for Western viewers, who will be able to say, “I’ve seen a different Georgia!”, when the truth is that everything save for Merab’s and Irakli’s story replicates rather than testing existing patterns of representation.

For the record, my issue is not with traditions, rites and culture in general – it is with the creation of national myths whose main purpose is to signify. For it is precisely because these myths merely signify rather than denoting anything meaningful, that they bring agitators to the streets. While that in no way excuses any of its impulses or actions, our response to the nationalist mob should not be “let’s all be friends,” but “friendship is impossible where you stand”. Put differently: rather than drawing in peace signs into postcards from the past, how about we start getting rid of the postcards altogether?