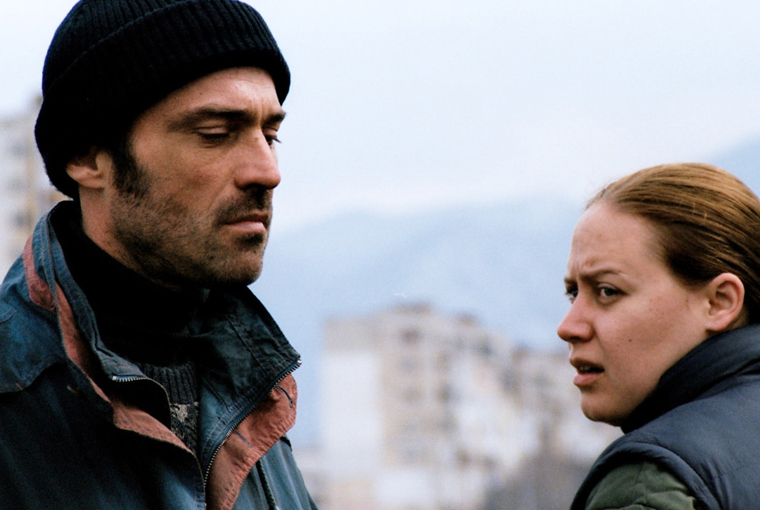 Judging from its synopsis and its dramatically morose title, viewers with an aversion to gloom could be forgiven for giving Godless a wide berth. In an unspecified, quintessentially down-at-heel post-Socialist town in Bulgaria (apparently Vratsa), Gana (Irena Ivanova), an impassive elderly care worker, steals her patients’ ID cards to fund her opiate addiction, in cahoots with her tersely violent boyfriend Aleko (Ventzislav Konstantinov). The more enmeshed she becomes in the web of corruption, fraudulence and manipulation, the more aware she becomes of the effect of her actions, and the stronger her sense of culpability and empathy grows, although it may already be too late for redemption. Godless is certainly not the first film of its kind, and certainly it won’t be the last to be seen on the festival circuit either, but first-time director Ralitza Petrova manages to handle the topic deftly enough for it to stand out against its competitors.

The film’s success is at least partly attributable to its protagonist, the stony-faced but moist-eyed Ivanova, who lends subtle, if spirit-crushing, physicality to her character’s inner struggles. As the film unfolds, the audience is taken on a journey from despising her to pitying her as we gradually learn more about the hopeless, affectionless misery of her life. This sense of being trapped is reinforced by the depiction of the urban environment. Labyrinthine, dilapidated housing estates are shot from disorienting angles, creating an oppressive atmosphere with no apparent means of escape. The inhabitants obsessively lock and double-lock their doors, seeking refuge from an intangible threat in claustrophobic isolation, the bitter irony being the person entrusted with the keys is the one causing them the greatest harm. Body parts are shot in extreme close up, continuing the theme of decay and dilapidation. Faces constantly blur in and out of focus, creating a nauseating feeling of dizzying proximity and unwanted intimacy. In keeping with the familiar Eastern European “always winter but never Christmas” trope, a grubby layer of slush covers the ground for most of the movie, making the different locations even more indistinguishable and further underlining the suffocating monotony of Gana’s life.

In contrast to the compassionate portrayal of Gana, all the male characters are markedly coarse and by implication less deserving of sympathy. Aleko remains glacially numb throughout, never letting slip any indication of endearment or any hint of remorse for his actions. The various tiers of the criminal gang responsible for running the identity fraud racket range from petty mobsters to high ranking corrupt police officials, and are cast in an even more deplorable light. This often verges on the animalesque, if not the monstrous, especially in the various scenes of sexual depravity, where they are made to look especially repulsive.

The one exception to this is Yoan (Ivan Nalbantov), Gana’s patient and also the inadvertent instigator of her spiritual and moral crisis. Just like the angelic choir he leads within the bowels of his dingy high-rise, his surly, weather-beaten exterior hides a sensitive soul. Having lost a large portion of his life to persecution from the Communist regime, when his stolen ID card implicates him in fraud investigations he refuses to take it lying down and reacts feistily. In addition to generally being afforded a proportionally higher amount of depth, the scenes with Yoan stand out through their differentiated cinematography, which suddenly turns markedly more lush and poetic. Carer and ward are repeatedly shown in the elevator together, as two barely visible silhouettes in limbo between celestial levels. These moments of aesthetic indulgence appear to implicate religion as a much needed oasis of sentiment and beauty. The choral music in particular comes across as something of an acoustic onslaught after the naturalistic, flat sound of the dominant sound scape. However, when the meaning of the titular reference to God is finally revealed in a somewhat shoehorned parable, it becomes clear that hope placed in spiritual belief is simply futile self-deception.

This despairing sense of inevitability is reinforced by parallel references to Bulgaria’s troubled past. One of the more senile old ladies forlornly and compulsively repeats the phrase “We welcomed the Germans when they came”, while the traumatic life histories of both Gana and Yoan echo the same sentiment of crushed optimism in relation to the Communist and Post-Communist eras respectively. Despite Yoan’s statement that “I’m a believer in myself, not in God,” the notion of the individual as an agent of change is ultimately and crushingly dismissed. Indeed, if there is any message to be taken from Godless it’s that even if humanity does actively choose to pursue good, the systemic evil dominating society won’t allow it to happen. Ultimately, the film may not offer any answers to the dark problems of contemporary life, or even any particularly original information or critiques, but at least it’s a relatively well-made piece of cinema.