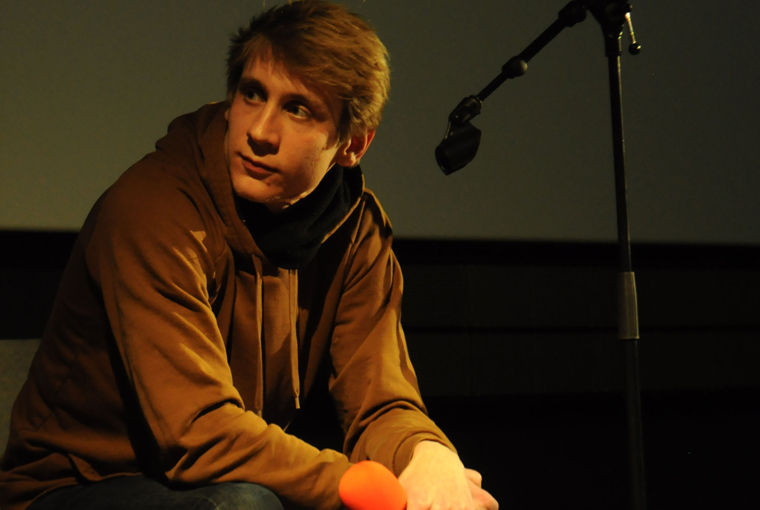 We met Alexander Abaturov during the Cinéma du Réel where his film “Sleeping Souls” was screened in the French Selection.

How did your project to follow the 2012 elections in Russia begin?

I was in Lussas doing a one-year Master’s program in 2010. At the end of the program I had to make a film. I changed my ideas a lot, but ended up with this one because I knew the subject. I had some experience from the 2004 elections, so I had an idea of how it will proceed, that Putin would win.

Where exactly does the movie take place?

In a small town in Siberia called Achinsk. We wanted to find something particular, to see things more clearly, and with a distance. The recurring theme of the movie is a building. We had the idea that the politics and the inhabitants of that building would somehow go together. So we found a woman working for United Russia that lived in that building, and later we found the theater group. That’s my thing. I always start with my imagination and then look for it in reality.

What is the difference between the countryside and big cities like Moscow?

Russia is like a train with two engines, each going in the opposite direction. In big cities people have more money, they can travel and have some knowledge about what is going on. But in places like Achinsk people are afraid that the whole regime will collapse if people go on the streets, like in 1989. Many people talk about the revolts, which is good, but they only happen in Moscow, Saint Petersburg, and maybe Novosibirsk, but there’s nothing going on in small villages, neither for nor against Putin.

In your movie most people give the impression that this a-political attitude will never change. They see it as Russia’s fate. Is that true?

Yuri, the United Russia mercenary, told me something interesting. Russia is a huge country, where people are separated by huge distances, and live under extremely harsh weather conditions. So people are violent, and closed. It takes time to change that. Today, you can get away from that because there are airplanes, but the mentality is hundreds of year’s old. But I think it’s already a first step to realize that, and not to say, ‘that’s just the way it is’.

But I also think that this is not solely a Russian phenomenon. It is happening everywhere, in Greece, in France, everywhere where people have a laissez-faire attitude towards their government. But we didn’t make this film for a French audience, so that they would laugh at the exotic Russian in Siberia or so, we wanted to support the dialogue in Russia and to incite people to ask questions.

Were you also trying to do anti-propaganda with your film?

Anti-propaganda is still propaganda. But I did want to inform the people. Still, it’s difficult to distribute this films in Russia. There is little chance that I can show this film for free, except in small theaters or private circles.

You use a variety of techniques – archive material, interviews, simple observation, theater – was this a stylistic choice?

I think it was more instinctive. I used the archive material from television – one scene where Putin is crying after having one, and another where a Patriarch says that believers don’t demonstrate – to show that it is the media with the biggest propagandist impact. I wanted to put Putin in the beginning so that there won’t be any suspense about who will win. For the theater, Putin and theater are just two things that go together. In the scenes that use original material, I tried not to move the camera and to stay passive. I never asked anyone to do something, to stand somewhere else, and so on, which is funny because it’s as if they were already staged for a game, a show, and representation.