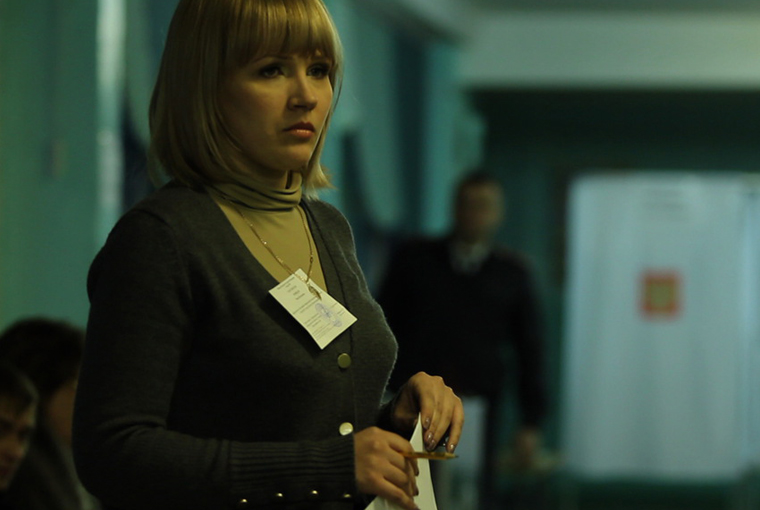 Sleeping Souls is a documentary that takes us to Atchinsk, a small city in Siberia, separated from Moscow by distance and mentality. The young director Alexander Abaturov traveled there to capture the 2012 elections. The result is a film about the apolitical mentality of the people in the countryside of Russia, about being ruled by a distant autocrat, propaganda, and fraud. These are issues that demand courage when one decides to address them, whether that’s in Russia or in other places or countries (maybe not as exotic as Siberia) where censorship is capped under a democratic veil.

The opening of the film brings us face to face with a slow motion shot of Putin weeping after having won the elections. We then follow the director into a state building where he will try to unfold the mentality of different people regarding the elections. Among the people living in the building is a young man who doesn’t care to go voting, a woman working for the Putin campaign, and a theater artist whose production will come up again later in the film. Also subject to the film are a “mercenary” for United Russia (Putin’s party), and a candidate for the same party whom we see posing for a photo portrait. In between these encounters, Abaturov gives us a general outline of the small city of Atchinsk with Putin’s propaganda announcements howling through the empty streets from public speakers. A more observational part of the documentary follows in which the director films the official voting count on the day of the elections. He captures the frauds and the election officials’ ambiguous reactions to them. Throughout the film, interviews and archive videos (like for example the speech of a Russian patriarch who claims that orthodox people should not protest) are interrupted by artistic images of a small theater play. All these elements bring together the pieces of the puzzle of today’s Russian countryside overwhelmed by a fear of the past and blown by an apolitical mentality, especially in places where information seems to take as much time to arrive as trains do.

The strength of the documentary lies in the variety of the sources Abaturov uses to portray the pre-election period. In the international media, the Russian elections were widely criticized. Cameras and external observers from various international organizations stood in as controlling enforcements in the voting departments around Russia to reassure a fair counting procedure. However, one can conclude easily from the documentary that this did not bar frauds. In fact, nobody really seems to mind. A woman working for the United Russia campaign seems to have no idea or thoughts, good or bad, about the job she’s doing. Only the “mercenary” of the same party cynically admits the tricky and unethical actions taken by the dominant system in order to reassure Putin’s power.

Ironically, the only critical voice comes from a theater that is working on a play that aims, according to the director, to contemplate the film’s first image – Putin’s tear. The tear is as artificial as the election procedure. Abaturov’s documentary makes you feel this stagnant routine at first hand. Can Russia hope for a different future? The director’s implications on protests in Moscow lets a slight ray of hope pass through the screen…One may also recall the signs of some demonstrators in Moscow saying after the elections “Moscow Does Not Believe in Tears.”