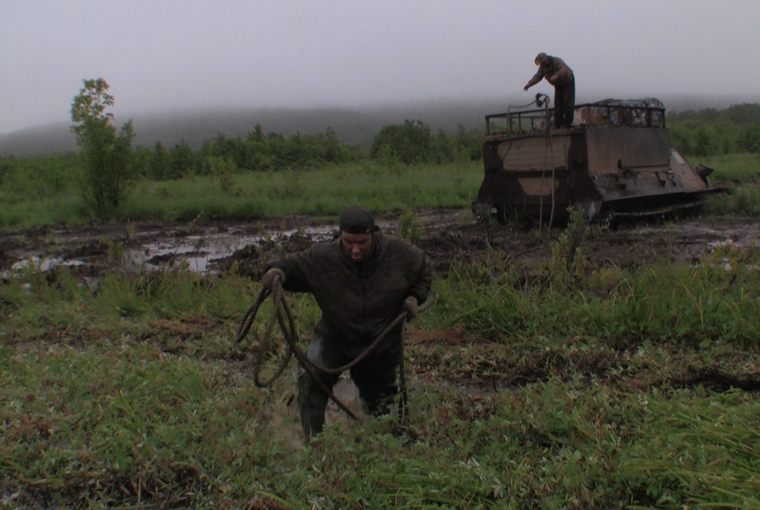 31st Haul was a pleasant surprise of this year’s Cinéma du Réel taking place in Paris from the 21-31 of March. Young director Denis Klebleev’s documentary from Russia takes us on a Cinéma Vérité trip to the lives of the natives of Kamchatka, a peninsula on the the Far East of Russia that is roughly as big as Japan, but only has about three-hundred thousand inhabitants. This film was Klebveel’s graduation project supervised by Marina Razbezhkina, in a one-year Documentary film workshop in Moscow. One of the conditions for graduating was to make the film entirely by himself. 31st Haul seems like a film that would not have been possible to make otherwise.

The documentary revolves around the lives of Vitalik and Yuri, two native inhabitants of Kamchatka who use tank-like vehicles to supply the region’s grocery stores with goods. Kamchatka has no roads as we know them, and the region’s drenched routes makes these trips considerably lengthy. Klebleev follows the two men for some weeks through Kamchatka. In the beginning, the film gives the impression of a road movie. However, soon the dingy heroes reach Yuri’s home. Yuri is a social parasite, and former prisoner and shows to be pretty aware of it, occasionally having a laugh about being a loser. His wife seems to be the boss of the house and of the whole transport business, which gives Yuri a sense in life, and in the community. Klebleev will spend time filming in the couple’s house, slowly working his way into their intimate world, their relationship, their understanding of work, marriage, sex and their particular way of communication (that includes a lot of swearing). At the same time, the director grabs the opportunity to observe the second character, Vitalik, whose wife lives in a different village. We follow Vitalik on a trip all the way back to where his family is. While the young director spends some time in Vitalik’s house, one can see Vitalik’s sensitive side unfolding until he is off again for his next muddy voyage.

Some scenes in the film are clearly slapstick, although it remains doubtful whether this was an aesthetic choice of the director or not. In the opening sequence of the film, one of the heroes swears at his tank for having been stuck, treating the machine like a human. In other scenes, as the director said, just listening to the language is enough to make you laugh. Vulgar Russian dialogues, unfortunately lost in the translation, would make intellectuals blush or panic. But the director also says that they help these people “to live.” So maybe then, these instances of comedy are just a part of their reality.

Although it is impossible to ignore the poverty, misery, and violence in the film – Vitalik talking about his ex-wife hanging herself –, it is very untypical for Russian filmmakers, working in documentary or fiction, to see comedy in life. This makes Klebleev’s film an exciting example of Cinéma Vérité, particularly for modern Russian cinema. Loznitsa, Fedorchenko, and others, who also travelled on cinematographic journeys to the remotest parts of the country, always opt for a more mystical, romantic, and nostalgic representation of the countryside in their films… Klebleev’s success in capturing this reality seems to have been the development of a relationship that made him important enough to be able to film the intimacy of the characters and at the same time not important enough to remain ignored by them.

31st Haul is a film of a very promising director and is also an example of how Cinéma Verité is a courageous trip. Klebleev started off to make a road movie and soon realized how limiting that would be since he managed to get so much footage of his heroes’t personal lives. For these kinds of films, whether documentaries or fiction like Miguel Ángel Jiménez’ Seagull (2012) one has to be a traveler like Klebleev. Not only in terms of location but also in terms of openness of mind, sensitiveness and understanding of deviating individual realities.