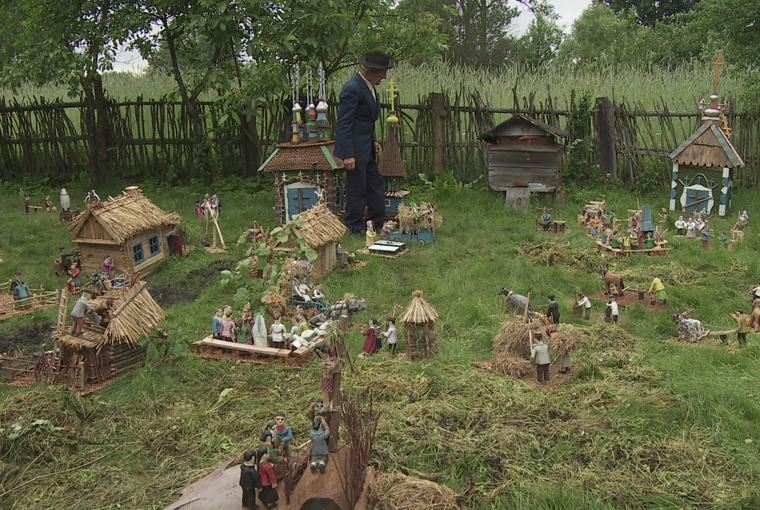 Pays rêvés, pays réels.” “Dreamed countries, real countries” is the name of the film cycle of Cinéma du réel in which Wooden People was shown. The Belarusian film offers us a vision sprung from the head of an old, reclusive eccentric, a “dreamed-up country” sculpted in wood and painstakingly arranged beside a hut that seems like it could belong to Baba Yaga. The Wooden People represent a vanished community of pious farmers. Mikalaj whittles them into life and rules over them just as Lukashenko would like to rule over the people of Belarus: without dissent. But if these little figurines, clustered around tiny wooden churches, cottages, carts, palaces and gravesites, embody Mikalaj’s touching and curious vision, Mikalaj himself seems to re-create a long-lost Europe that, for Westerners, can still be glimpsed through fiction and film. Speaking seemingly for himself rather than the camera in an half-incantatory murmur, this old man who lives deep in the Belovezhskaya Pushcha forest sculpts his little dolls in his own image: “It appears I have five fingers,” he remarks, whittling a peasant man, “so he will have five fingers.” He resembles a character from Chekhov or Gogol, a man whose religious faith and devotion to hard work and village custom is as tangible as his knowledge of the natural world.

Viktor Aslyuk’s camera places Mikalaj deeply in his green surroundings; he is often framed in the background or the corner of the frame, the rest of the screen filled with an almost unearthly sunlight and lush foliage. The forest itself is something difficult to imagine appearing in Western Europe. In one magical shot, the stationary camera observes a wild boar unhurriedly cross a dirt footpath. Another moment shows a turtle lumber past the tiny wooden village like some kind of majestically indifferent behemoth. Mikalaj laments his old days of listening to larks, now that “the birds don’t sing anymore,” but the film’s soundtrack contradicts him emphatically: the birds call to each other constantly offscreen in echo and counterpoint to Mikalaj’s dirge for his vanished human friends. Nature is not just the background to Wooden People, nor is the film a dramatization of man versus woods: rather, nature is transformed by the film almost into a folkloric element, as much a part of Mikalaj’s mental world as it is his physical environment.

As an example: midway through the film, a wide shot shows trees encroaching on the dilapidated wooden fence. All is still. Then, suddenly, a wind picks up and the foliage begins to sway and tremble. What Western cinephile can watch this scene without recalling a similar moment in Andrei Tarkovsky’s Mirror? Whether Aslyuk is informed by Tarkovsky’s vision I cannot say, but his film undeniably draws on a reverence of the mysteriousness of nature and its resistance to modern human values.

Not that Mikalaj in his forest is entirely ignorant of the outside world. In one of the film’s funniest moments, he shows the camera a pair of wooden football players. They have abandoned farming in order to play sports, he clucks disapprovingly, placing them next to an odd little sculpture of men in suits surrounding a large white casing. “But what will they do if the nuclear bomb explodes?” asks Mikalaj.

The beauty of this short film accentuates its mood of deep, romantic melancholy. Mikalaj’s wooden village is full of burial scenes, deathbeds, funeral processions, and even a crucified Christ. This suggests that the aura of sadness is not only a product of nostalgia, but has always been a part of Mikalaj’s life. The old man’s tears as he remembers his mother are nearly heartbreaking. But the melancholy is less for the vanished village he recreates than for the fact that the wooden village itself seems so fragile and temporary. Like the world in the shadow of the nuclear bomb, it can be wiped out by a heavy storm or other act of God. In its scant 27 minutes, Wooden People seems to sketch metonymically an elegy for all human accomplishment.