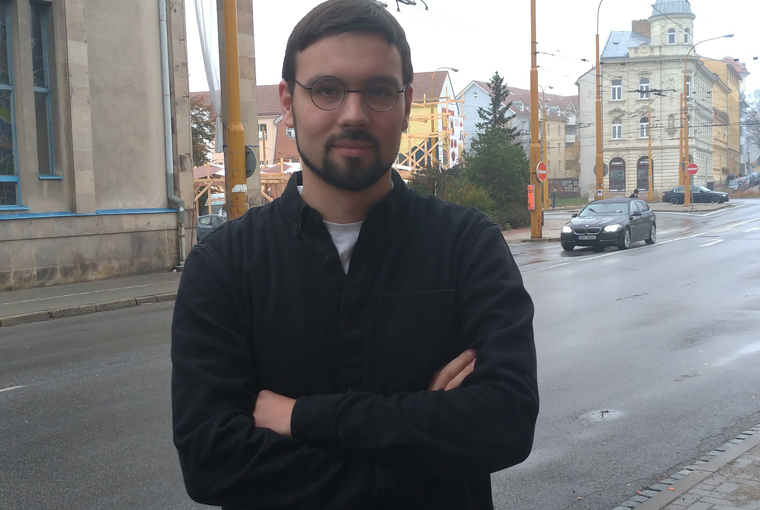 We met Belorussian filmmaker Alexandar Mihalkovich at the Ji.hlava Documentary Film Festival, where he presented a feature documentary about his grandmother in Crimea which was pulled from the Minsk Film Festival this year.

Where did you study? Is there a film school in your hometown?

There is a film school in Belarus, but in my cosmopolitan opinion it still lives in the 1970s. It still educates students in a very formal way. There is no film school which fosters professional relationships between people and there are no editors or good DoPs. All these professionals emigrate from Belarus to nearby countries like Ukraine, the Baltic countries, Poland or Russia. Why? Because Belarus doesn’t have a film institute and they have no money for production. Of course, they give money to cinema, but it’s a corrupt system. Those who get the money make movies nobody watches and which never go to festivals.

So, the only opposition is independent film-makers who mostly do movies DIY, for example Anastasia Miroshnichenko with Debut (2017) and Andrei Kutsila with his film Summa (2018).

No. It used to try and support them. The festival’s independent jury selected local films. These films used to participate in the main competition, but they never won. Last year the minister of culture made a statement saying they don’t really represent Belarus properly and shouldn’t be shown. Now they put a commission from the Minister of Culture in charge which controls all the sections of the festival.

My film and my friend’s film (Strip and War by Andrei Kutsila) were both selected for the festival this year for the competition, but the Minister of Culture watched them and asked the festival not to show them. I also know some Belarussian friends whose fiction films were in Minsk in previous years. They made a film together this year, but it has also been banned from the festival.

Does the Ministry of Culture have a set of guidelines for filmmakers like the Code of Ethics in Russia?

It’s not an official set of rules. A lot of people from our country have self-censorship already built in. I went to do a Master’s program in Europe (“Doc Nomad”) and when I came back I immediately noticed how much people restrict themselves.

You are also a photographer?

Yes I made a photography project based on my experience in the army. I was in the army in Belarus for one year and I took secret photos during that time. This was back in 2012 and 2013. A lot of Western magazines picked up on them and they were popular. Belarus caught on, confiscating and burning all the prints on the border. They said it was extremism.

What is the relationship between Belarus and Ukraine at the moment?

From my point of view, our government felt threatened by everything that happened in Ukraine. They were worried that something similar might happen in Belarus and that the country might be annexed by Russia. We don’t have borders and we are overwhelmed by Russian propaganda. People watch and like Russian television, which played a huge role in the Russian-Ukrainian conflict. However there has been a light-weight decolonization going on in Belarus, so national symbols and the wearing of national symbols is allowed. As a filmmaker you can also shoot more freely now. After my series of photographs came out in the United States, the KGB came to my home to ask me questions about why I’m traveling abroad etc., but there is no direct intervention. They don’t put sticks in my wheels.

Did you feel nervous about filming your grandmother in Crimea in public?

In Crimea I felt especially nervous. The Russian government has created an immense atmosphere of fear around this area. It starts when you arrive at the border. There is a very long check-in, they ask who you are, why you’re coming, who you’re visiting, what you do. They asked me to show them my photos.

Naturally we were paranoid and we censored ourselves because of the atmosphere of the city. Do you remember the scene which features women dancing? One of those women worked very closely with the mayor of the city. First, she agreed to shoot, but when she heard me speak she started to get suspicious and asked about my accent, “What is this accent, are you from Ukraine?”. And we would say “No no, we’re from Belarus”. For Ukrainians it’s totally impossible to shoot. Once with my DoP we went to the local market. Someone heard our accents and wanted to take us straight to the KGB. We always have to tell people that we’re from Belarus, not Ukraine.

It’s still possible for Ukrainians to go there. When I went, I took a train from Kiev to a nearby city, then I took a small bus which took me to the border, and then I crossed one kilometer by foot. After this you arrive at a check-in. On the other side another bus picks you up. Even buses are not allowed to cross the border. The peninsula is gradually losing its connection with Ukraine, more and more each year. But this has not affected the number of tourists. There are still a lot of tourists, one or two years after annexation there were fewer, but now the numbers have gone up again.

After annexation, “Crimea returned home” was the Russian slogan. Lots of Russians were encouraged by this and went to buy houses there. Now prices have gone down because nothing has changed in infrastructure – the roads are still very bad. People have realized they don’t want to invest such amounts of money.

When did your grandmother move to Crimea ?

Many Soviet people moved all around the Soviet Union. She moved to Ukraine in 1984 from Russia. Then in 2003 she moved to Crimea to spend the rest of her life there. She has been living in Crimea for the past 16 years.

Could you explain the attitude of your grandmother’s Russian neighbor?

You know Svetlana Alexievich? In her book Secondhand Time, she talks about Homo Sovieticus. This is a person who, even after the collapse of the Soviet Union, is unable to be critical. They can live in a democracy, but they watch television in the same way as in Soviet times. They trust it, because it’s their main source of information. They don’t want to think about things differently. They don’t need to be 90-years old like my grandmother. I had a huge argument with my 40-year-old uncle living in Belarus, he said that there were fascists in Ukraine, and that he wanted to fight them. I asked him “Why?”. And he said “I trust the television”.

Why does your grandmother think differently?

I will speak from a perspective of nationalist identity. In Soviet times Russia was trying to Russify all countries. The strongest Russification attempts took place in Belarus. In the 90s when the Soviet Union collapsed there were very strong nationalist movements throughout Europe. But when our president, Alexander Lukashenko, came in, in 1994, he was elected on a platform of a return to the ideas of the Soviet Union. After the collapse the country was in a very bad state. From his perspective, keeping a Soviet state means keeping the Soviet values and speaking in Russian. My grandmother preserved a strong national identity because she was living in Ukraine at the time. Now I see that people in Ukraine have this critical way of thinking, there is debate and people are asking questions. In Belarus I don’t feel that.

Does your grandmother want to leave Crimea?

I was trying to show this lack of security which the situation brought into my grandmother’s life. She wants to leave. But when you’re 80 and you’ve lived through so many geopolitical cataclysms in your life, it’s difficult to start a new life again. She moved there to live out the rest of her days. But she also has seven neighbors and none of them talk to her now because of her political views. So she wants to live near the sea, and be near her sister, but at the same time she is very isolated from her local community.

Why did you choose to put emphasis on singing and dancing?

I first shot my grandma in 2013 at the same time the Ukrainian revolution started. There was a lot of tension between people, especially in 2014 after the annexation. Now a lot of people have just accepted their fate. When I first came to shoot, I noticed that music is the only thing that unites all these grannies. Most of them are pro-Russian but they can still sing Ukrainian songs. They are conflicted, they believe the propaganda, but they can feel that something is wrong. And the official, state-sanctioned songs which are sung by the locals are a portrait of the place and situation. When Putin built the Crimean bridge, they had a singing competition to write a song about the bridge. I didn’t record it but it’s also representative of the positive coverage of Russian propaganda.

Did making this film change your relationship with your grandmother?

This film was my way of keeping a connection to my grandmother. Being an old person is very hard and it’s made even more difficult by the current situation. Families try to help, but they still keep their distance, especially because it became so difficult to get there and it’s become four or five times more expensive. I think that filming my grandmother was an unconscious way of getting closer to her. 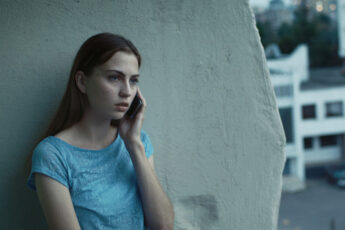 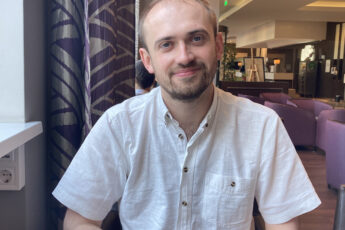