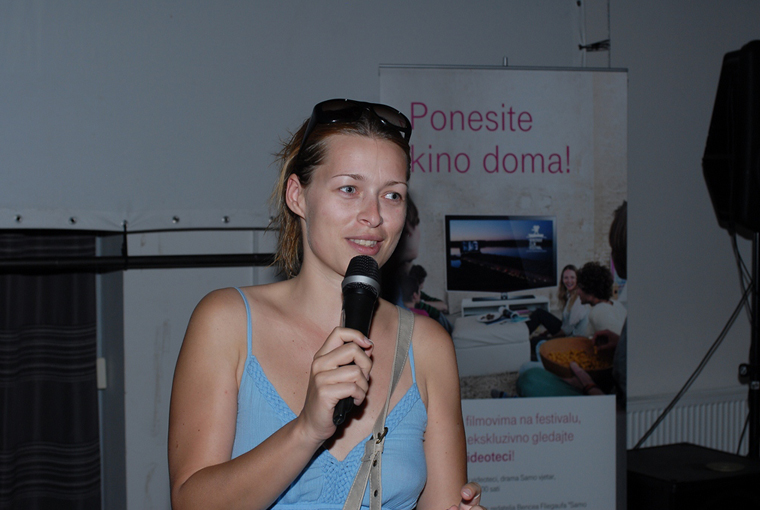 We met Czech filmmaker at the One World International Human Rights Festival, where her documentary “Non-Parent” screened in the Czech competition. Počtová discusses her ideas on family, the endurance of traditional views and how she reached such a high level of trust between her and her subjects.

You seem to be interested in non-conformist or anti-traditional lifestyle choices. Why is that?

I think it’s because it’s such a big part of our private lives. I’m not the type of director who is interested in politics and I really like to see what’s influencing us the most. In our private life it’s our parents, our families, our children and our relationships; everybody is dealing with this stuff. There is no discussion in a café between girls or boys which is not about this topic. And the truth is that because of Communism we are a little bit behind. For Americans it’s nothing new because they are already used to different types of families, lesbian and gays. Here in Eastern Europe it’s still a topic they don’t talk about. It is slowly changing and the gap between what we expect and what is reality is big. I really like to map out these areas, this gap between reality and expectation.

Talking about reactions to different families and relationships, I wanted to ask you about the mother of twins who is bullied by her neighbor. How common is this kind of behavior and is there a difference between views within and outside of Prague?

There was another dimension to this problem because the children are half gypsy and unfortunately in the Czech Republic, almost everybody outside of Prague are not as well-educated and almost always against people who are not white. That was part of the problem, but also there are people who are simply petty sometimes.

Did you spend a lot of time with the cast before you started filming or did that trust come on set?

Half of the cast were my friends for ages before the film. The mother of twins and I studied together at FAMU and the couple who don’t want to have children, I’ve known them for ages. Prague is really small and the father with shared custody, he’s my friend.

He seems to be quite mature and accepting of his situation…

Yeah, he has come a long way from his own childhood. He knows how it feels and he doesn’t want the same for his daughter.

You say you found a large part of your cast through personal connections. Do you believe there are many more examples throughout the Czech Republic or not?

In Prague 70% of people are divorced and in the rest of the Czech Republic the rate stands at 50%, meaning every second couple is divorced. It’s not unique, it’s happening everywhere. There are also couples who are separated but stay married, meaning we don’t have the full statistics. So I think that this is the problem, there at least half of Czech families that are different in some way but more people should be talking about it.

I understand what you mean, but I think yeah in the end we want it. It works for us – man and woman, children and families. History shows us that it really is the best configuration to have a mother and father. It’s good for people to have somebody to care for and somebody to care about you. Of course today we can afford not to be in a couple because our social and economic positions have changed so much from 100 years ago. We can pay for our own flats, we have jobs, something to eat, and if something breaks we can call somebody, it’s no problem. We can be alone and we have so much freedom to chose, and I’m totally for freedom everywhere, but at the same time it’s a big responsibility because you’re always the person in control. There is nobody to judge you but also nobody to share the blame. But I think to be together with somebody is nice, it’s great. It can be problematic but you can get over it. The problem is finding somebody to be with because after the age of 30, you are quite individual with your own habits. Also to start a relationship you need to have some naivety which you lose as you grow older because you’ve already seen so much stuff. The older you are the more difficult it is to find somebody.

The couple without kids met fairly late however..?

Around the age of 30 and, yes, they are completely happy and they are a great example because they have what the other heroes in my movie do not. They have a really nice working relationship but they don’t want to have children and it’s starting to be really common in Eastern Europe, or even throughout the whole world. In central Europe there are almost 10% of women, we are not talking about men which is quite interesting, who don’t want to have children. 10%…it’s starting to be a lot.

It’s a huge challenge and you have to make sure you’re ready!

If I can tell you something, I’m 37 and I don’t have children and I share some of your ideas. I’m not ready to have children but you will never be ready. Do we ever feel completely happy and satisfied? So many children, and I would like to know the statistics, are born by mistake. I have hundreds of friends around me who did not plan it all.

In Generation Singles, we see you in a few shots as we do in Non-Parent. Does this happen naturally or do you plan it?

Did any of the protagonists inspire you or change the way you think dramatically?

It’s not just about the protagonists but the life I led during the shoot. I was doing this movie for five years and for a woman in her 30s this is a very important phase. So yeah I changed but you know each of my films changes me. I started to shoot this movie worrying whether I’d be a good mother or whether I’m capable of dealing with the idea of not having children, and in the end it made me not think about it so much.

So do you plan to have children?

I would like to but I have to find a man and this is the biggest problem. Of course now I can imagine being a single-mother but there are the financial problems and I don’t know how to make enough money to live and raise children.