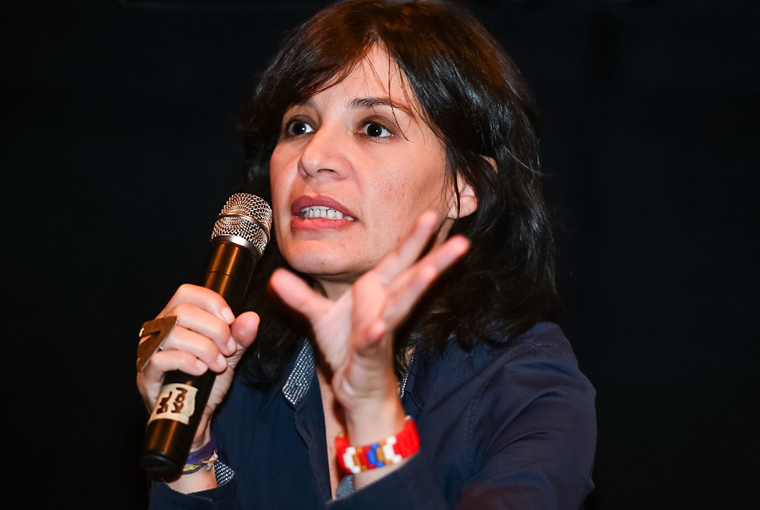 Teona Mitevska’s “The Woman Who Brushed Off Her Tears” was screened at this year’s Berlinale. It is film about two strong women, one living in France and the other in Macedonia who are separated not only by distance, but also, it seems, by epoch. We met with director Mitevska as well as Labina Mitevska, one of the lead actresses of the film…

Teona, where did you get the idea for this film?

TM: It came from necessity. I was watching a great interview where Björk is interviewing Arvo Pärt. At one point Pärt says “anything is possible in art today – there is a lot of art, but only the necessary art is necessary”. I think every film that I make, every piece of art I create, comes from necessity. There’s something inside of me that tells me now it’s time to speak about this.

This is a story of two women. It’s about loss, it’s about guilt, and it’s about finding yourself in a situation and managing to achieve everything you want. It’s two stories of mother and child, one in the West, one in Macedonia. They influence each other through their actions on an emotional level.

Why did you choose the music of Arvo Pärt as a score?

TM: I had been listening to Arvo Pärt for so long, then during the editing the editor told me we needed to add some music, so we went through my iPod and found Tabula Rasa. It went so well we just thought: this is it. Usually I don’t add music so late into production, but in this case it worked out.

Could you tell me some more about the Juruci people?

TM: It’s a Turkish minority. Macedonia was under the Ottoman Empire for five centuries. Basically the Juruci were brought to Macedonia by the Sultan to take care of the horses: they were the horse people, and many of them never returned to Turkey. What’s interesting is that they were really very separated: they live up in the mountains, they are very independent. Every Friday the men go to the market to trade. The women do weaving, using the most amazing colors. A few years ago the government actually built roads, so they started coming down and changing. So in a way it’s a world that is disappearing. I think in ten years they will be dressed like us. I said to myself, I have to take the chance and make this film now. It’s part of our heritage, when you see this film you see these two women from different parts of europe, and you can’t even imagine they are on the same continent. They are two hours flight from each other, but they seem almost a hundred years apart.

Do they speak Turkish?

TM: Yes, a very old form of Turkish, so they have a very distinguished way of speaking. Of course we use this language in the film – there is very little Macedonian used in the film.

Did you have to train your actors to speak in this language?

TM: Yes, of course. Labina, who plays Asjun, and the boy Ilkin, both studied it. The grandfather is a Macedonian Turk himself. As I said, we have a small Turkish minority which amounts to about five percent of Macedoina’s population.

Is the government doing anything to prevent the loss of this culture ?

TM: As I’ve said they are of Turkish origin, and the Turkish government has done a lot for them. We live in a world of change, they are not dying out but as we progress we’re mixing, but what does progress mean in the first place? It’s a big question. Should we keep living in the traditional way? For me, their way of life may be the future because they live in such a simple way, their values are so simple and so pure. So maybe we will go back to nature and the basic of life. For me it was interesting to mix these two women, one from the west who is totally desolate, lives in this desolate landscape with this desolate relationship versus these people who consider family to be the most important thing in the world. At the same time, the position of the woman in this community is horrible. Can I judge them from my perspective as a progressive woman? I’m not sure.

What is the film about?

TM: Loss, and finding a way to deal with loss. I wanted to juxtapose East and West. It is also about guilt on the part of Helena, because the story starts with the death of her child: she is guilty for not being there. But she doesn’t have time for guilt: She must survive.

What is the Flaherty documentary technique?

TM: Flaherty is an American and he is the father of documentary. Men of Aran, Nanook of the North… Basically, he made five documentaries in his life, and for each documentary it took him about ten years. He really lived with the people he observed in his films. I tried to live around the Yurici people myself. You’re not really accepted in the beginning, so it takes time to establish communication, to gain their trust and the trust of the community.

How did the filming go ?

TM: It was great, making this film was kind of like a race, we were running from mountain to mountain all over Macedonia because there were so many locations. The last scene is in this snow up in the mountain, we had to climb this mountain, it was very physical. Then we went to Germany where we shot France for Germany so that was another change. For me it was a challenge to shoot outside of Macedonia, I was afraid of this. Now I could make a film anywhere, I could make a film on Mars.

What is the place of Macedonia in East European Film?

TM: When I started making films, we were making half a film a year. Then we started making a film and a half per year, and now we make four films a year. So I think we are making more films: they are investing in quantity in order to get some quality.

Labina, how was it working on this film compared to previous projects, for instance I am from Tito Veles?

LM: Every project is different. Tito Veles was smaller and more compact. Here, production-wise it was more complicated because we had four co-productors and four countries involved, but the creative process itself was very fun. It was a new experience because we had a new director of photography and new actors. And it was a beautiful journey to make: what I like about Teona is that she takes a long time to prepare everything. These days in Europe it’s rare to take a long time to prepare a film. Usually people don’t have a lot of money and time, so they call you one or two weeks before the shoot. With Teona, we spent two or three months preparing. Because I was playing a character that comes from a very strange, traditional and patriarchal society, she sent me to live with the Juruci people for about two weeks.

How did you communicate with them?

LM: I don’t speak Turkish, but I had a teacher. I learnt how to make cheese, how to milk the cows etc. So we started there, then we started working on the characters, and then the rehearsals began.

Did you base your character on any person in particular ?

LM: No. Teona spends a very long time writing her scripts. When this one was ready, it was extremely detailed and intricate. Of course I put some of my experiences with the Juruci into the character, but in the end it was mainly the script.

« Previous post
Olmo Omerzu’s A Night Too Young (Prílis mladá noc, 2012)
Next post »
Teona S. Mitevska’s The Woman Who Brushed Off Her Tears (Man on Aspahlt, 2012)