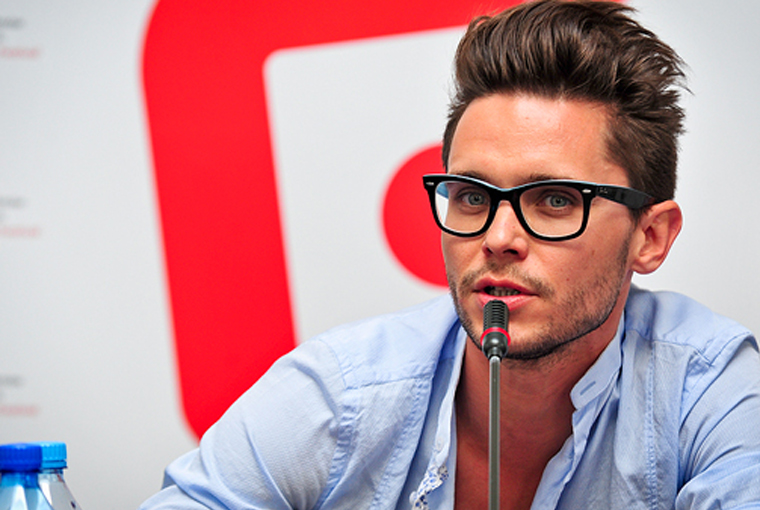 Polish helmer Tomasz Wasilewski speaks about gay culture in Poland, the motivation behind making “Floating Skyscrapers”, and its reception.

I don’t know. For sure, it’s different than in France. In Poland there is no such thing as gay marriage. But it is hard for me to say. You know, the most important thing for me in the movie was that we did not try to look at the characters with a specific sexuality. We were fighting so that the viewer would say that it’s about people in love, not about gay people falling in love.

What motivated you personally to do the movie?

I wrote the script eight years ago. At the beginning the story was different, it was about a fifty year-old woman and her daughter and the relationship of the daughter with another girl.

What made you change the script?

I was trying to find money for the movie for a long time. It’s hard to find the money right after film school, so I worked a lot on this version and decided to change the weight of the characters. The mother was no longer the main character in the first version. Then I decided to turn the girls into boys because I wanted to make a movie about emotions and reduce the social aspect of the movie. In the media and in society there’s a difference in tolerance towards lesbian couples. There’s something different when you see two girls on the street holding hands. That’s why I decided to change it with boys. It’s hard to explain. Avoiding this social aspect also leads to a stronger social aspect.

How do you represent the difference between the city and nature in the movie?

For me it was important to chose corridors, narrow, and claustrophobic places. The characters needed these places. At the same time, when they take the trip to the lake, I wanted the lake to be wide, and open. There was a kind of freedom with the lake. But they are still very blocked. So the bridge at the lake is also a concrete building, like the city. So it’s not pure. I wanted them to escape but to end up in another prison. It’s their fate.

Why is the movie so dark and melancholic?

That’s the way I perceive cinema. You could say the same about my first movie. And my next movie will be even darker. It’s not about the sexual minorities. My movies are like this. I don’t like happy endings. When we screened the film in New York, people were almost in shock because I decided to kill the main character – well, we don’t know whether he’s dead, but he’s severely beaten. But that was not a problem for me. I don’t think about it that way.

How would you justify the beauty of your shots and of your actors in light of this darkness?

It’s human nature. Human beings can be amazing and beautiful but terrifying at the same time. They can be monsters. You know, the most important thing for me in the movie was that we did not try to look at the characters with a specific sexuality.

But you do also make the use of gay iconography, like swimming male bodies which you can find in Pedro Almodóvar’s “Bad Education” and in David Hockney’s paintings.

Well, I knew from the beginning that I wanted Kuba to be an athlete. But when you look at him, he’s a regular guy. I decided for him to be a swimmer because for a character who is closed, being in an environment with half-naked men all the time makes it problematic for him to win his interior fight. I know what you mean, it’s about the cult of the body. But I mostly wanted to give him a dream. Of course I used some stereotypes of the LGBT movies in the film. But swimming wasn’t one of them, it was rather to have the character move around in a manly profession.

What stereotypes did you play with?

For example when his mom finds out that he’s seeing Michal, she slaps him in the face and says that it’s her fault. And that’s a stereotype that the mother is always herself. When I screened the movie in Western countries everyone was laughing, but when I saw it in Eastern countries they don’t laugh because they think it’s a true drama.

Do you think that’s why so many gays stay in the closet, in your film or also in Szumowska’s “In the Name of…”?

Western countries had so many years to go further which our part of Europe did not have. That’s why my movie and Malgosza’s movie, I think, these are the first movies about the subject in Poland. This says a lot about the conditions in our country but not only our country. I remember that when I was screening the movie in Karlovy Vary, I talked to the distributors from other Eastern European countries, and they told me that they don’t have this kind of movies. Maybe in twenty years when tolerance towards minorities grows, it will be different, and the movies will be different as well. Maybe because these are the first movies, it’s like that.

Thank you for the interview