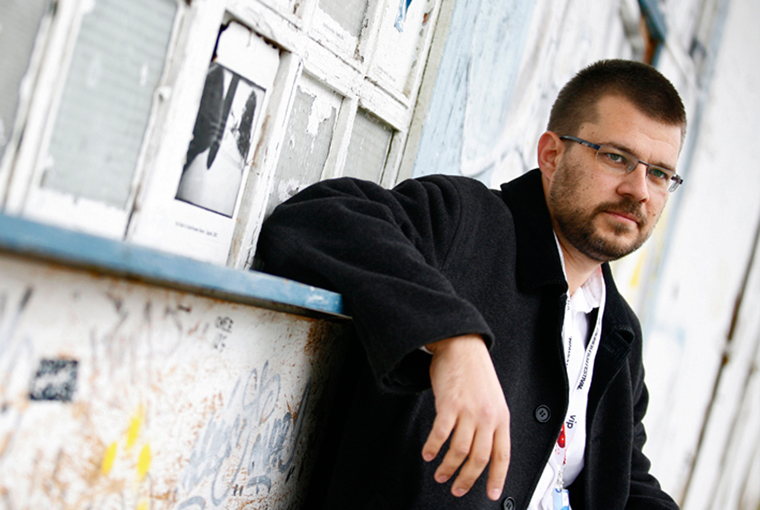 Colette Castro met Peter Kerekes during the Berlinale to speak to him about the collaborative “Velvet Terrorists”. Kerekes speaks about its story, the process of working on collaborative features, and his upcoming project.

Your film tells the story of three different men one by one. How did you decide on the order you were going to present them in?

We all had different opinions. Ivan suggested we have Vladimir first, then Fero and Stano. I wanted to have Fero first – to present the setting while talking about what the Communist attacks were about. But after several screenings we settled on the order they are in now.

I think the order completely changed the meaning of the film. The last part sets the scene. In the story of Vladimir the girl is fighting for something. That’s why it had to be the last story. She is preparing Velvet Terroists 2, the film that will be shown in 20 years.

The conversation between this girl and Vladimir compares Neo-Nazis with communism – do you think there are similarities between the two?

Vladimir was describing how you couldn’t have long hair during communism, and she was saying it’s the same today. That was the big argument because he says nowadays people simply don’t like you, whereas back then you could be arrested. Of course there is a huge difference, whether you don’t like somebody or whether you send them to prison.

But I do like this generational argument that they had. He was fighting against the Communist system and Eva is afraid of Nazism, a movement which is slowly growing in the Czech Republic and in Slovakia. I think a young Vladimir would have been the same nowadays as Eva is today.

I think all three of them, Stano and Fero also, they were never just fighting against Communism. It’s not a question of ideology, they would also fight against Nazis, they would fight against dictatorships or any totalitarian system.

I noticed that Stano and Vladimir were acting alone?

Yes. I will say what Ivan used to say, which is that Stano’s actions were confused because he was so angry. This was partly because he was a little bit crazy and this was a major anger. What is nice in his case is that he was thinking he didn’t want to harm anybody, he just wanted to show that he was there, that he could do something powerful. So that’s why he was acting alone, like “I am here, this is my anger”.

Vladimir had friends helping him. His is a very complicated story.

The scene with Stano in the cell is quite effective, who came up with that idea?

It was Ivan’s idea. We wanted to film a lot of Stano’s everyday work, which is boring, pretty hard, tiring construction work. Then we had the idea of how to show the prison, so we asked him to show us the prison. This is how we worked together a lot, we just put the idea to him, then we would just wait, sometimes it worked fine and sometimes it didn’t work at all.

Did you each identify more with one character?

Yes, especially in the process of editing, you are watching these people all the time and you start to even use their language, because you are always hearing the same phrases and words. Some of them are pretty funny, so they start to become a part of your vocabulary. I found out that Stano is my alter-ego. I don’t know what the other guys think. They were all great but Stano was the easiest to identify with.

Did you have a political agenda for the film?

It was not a deeply political film. It’s not an anti-Communist film; as I mentioned, these three men would fight any ideology.

How did you find the story?

It was Pavel who read about Fero in a small regional newspaper and found it very interesting. He was expecting to find a terrorist, like one portrayed in the media. He found the guy’s number and called him, and was surprised to hear him saying: “Yes I can meet you a little bit later because I have to pick up the kids”. The media image and the reality were suddenly very different. Vladimir is well-known in the Czech Republic, but we had to track down Stano.

Are you planning any more films together?

Yes, I am making a film with Ivan. It’s a film about censors, we want to make a film about their everyday work. It’s strange to think that in some Arab countries, the censor’s full time job is just watching half-naked girls and covering them up: we want to know more about this dream job. We are romantic people, so we are interested about the censorship of letters in prisons; they may be dangerous letters but most likely they are just love letters. It comes out of curiosity because we have no idea how it really works. It was the same with the terrorists: we were interested to find out about these people who are prepared to risk their freedom and their lives for their goals. It was not a political film, just the truth.