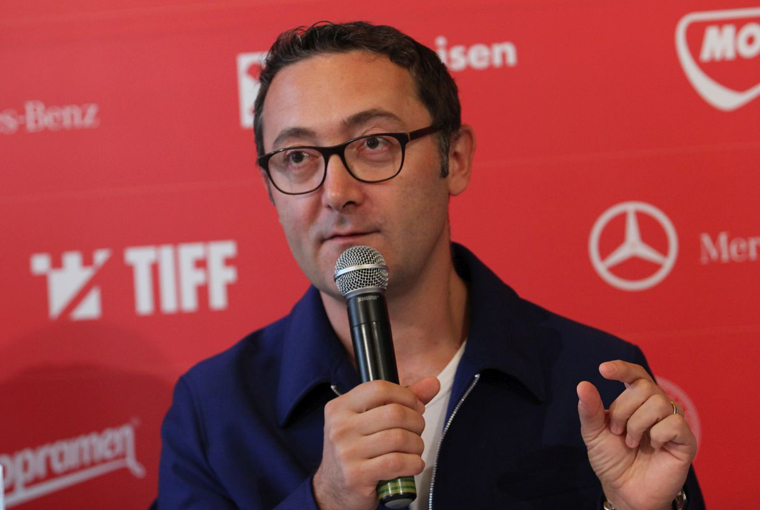 Tudor Giurgiu is a Romanian producer and director. He is also the co-founder and current festival director of the Transylvania International Film Festival which celebrated its 10th anniversary in 2011. We met Giurgiu at the Berlinale for a short conversation on his upcoming feature, his involvement in production, and on the story of how he ended up in the film business…

How did you get into cinema?

It started with cinema. I finished film school in directing, and the first thing I did after that was to open a production company. I also worked a lot as first and second assistant director on some American productions which were shot in Romania. After that, I went into advertising, for two or three years I worked in TV, and then I finally came back to cinema. It was kind of film/tv/film.

Why did you decide to get into production?

I started my career as a director, but I soon realised that especially in Eastern Europe there was a big need for strong production companies, because the craft and skill of producing a film was not even taught at film school. We didn’t know what a producer was, or what he does. So I thought, “there are many good and talented directors, but very few producers who know what producing is about.” So that’s why I decided to focus on production.

That was in 1994, and I really didn’t know anything about producing at the time. I took part in a project called the East West producers’ seminar. It was a great initiative funded by an institution formerly known as British Screen (which, unfortunately, no longer exists), and a couple of British producers from Linda Myles to Chris Auty (the latter was producing a film with Bertolucci at that time). All these people came up with the idea of doing these workshops for professionals from Czech Republic, Hungary, Poland and Romania so that we would be exposed to the market. At the workshop, I learnt what it means to be a producer, what the relationship between the creatives and the producer is, and how this whole system operates in the UK and in France. After the training, I immediately opened my company.

Was it difficult to get funding from the Romanian government ?

Before 1997, it was very difficult, because there was no system put in place to organize the funding. It was very random I would say. Then, after 1997, I think Romania (besides Hungary) was the only country to set up a proper funding system in Eastern Europe. Our system was heavily influenced by the French one: we have the same body, the CNC like in France, and so soon the funding became more transparent. But before that, it was a real struggle. It took me more than three years to get funding for my first feature. We were rejected, but we went to court with the CNC and we won. Now these things no longer happen, mostly because the New Wave of Romanian cinema has been so explosive.

What inspired you to make ‘Love Sick’?

I did this film mostly because I was looking for a coming-of-age story, and I read the novel of the same title written by Cecilia Stefanescu. I found it very charming and thought it would be cool to develop such a novel. It talks about art, it talks about politics, and it talks about homosexuality, which, at the time, was still taboo in Romanian film. I think it was the very first time on screen that two women had a love affair, but it went well. The film had a very good festival career, and I learnt a lot from this experience.

When is your next film ‘Of Snails and Men’ coming out?

The plan would be to release it as a world premiere in Cannes, but of course we can’t be sure this will happen. Still, I think it’s a nice story, and certainly very original. It is inspired by an incident that happened in Romania some time ago. The script was written by a friend of mine, Ionuţ Teianu: his plan was to depict this situation where 1000 workers in a car factory try to save their workplace by donating their sperm. It’s a very Full Monty type of film.

Is the film based in Romania?

Yes, but we filmed in Czech Republic, and there are a lot of dialogues in French. It’s a social comedy. I hope that we can also find an audience for it in France.

What have you been doing at the Berlinale?

I was pitching my third film. It’s always good to try to meet the international scene in terms of buyers or co-producers as early as possible – while you are developing the film. So I had a few meetings and presented my new story. I made a sort of a promo before coming here which I presented with the main actor. It went well – I met people from France, the Netherlands, Sweden and Germany.

Are you producing any films at the moment?

At the moment we are in development with two debut films – we are again looking for partners, and money… One is called Breaking Waves, and the other one is The Japanese Dog. In fact, Ioan Antoci (The Japanese Dog) was awarded in Cannes a couple of years ago with the Krzysztof Kieslowski ScriptEast award.

How about your festival?

TIFF has become one of the most appreciated events of this kind around here: many say that it’s one of the best festivals in Eastern Europe. Last year it celebrated it’s tenth anniversary with more than 230 films, and more than 1000 guests. Our focus is first and second features, but we screen films from all over the world. It’s getting bigger…