Maybe if the Eye Perceives it as Real, it’s Real After All 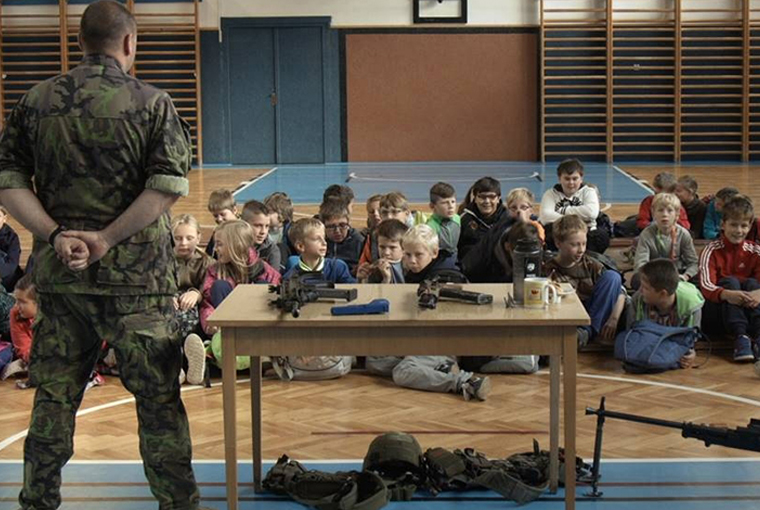 Adéla Komrzý opens her incendiary attack upon the renewed chauvinistic militarism of the Czech Republic with a quote. It’s US sociologist W.I. Thomas’ theorem “if men define situations as real, they are real in their consequences”. It is a bold and pertinent quotation to open such a film with, as not only does it self-reflexively offer the potential for a critique of her own work, but it also highlights the institutional nature of chauvinism in its patriarchal assertions of manly prerogative. From such a combative opening, Komrzý refuses to back away from her pursuit of the ‘patriotic’ right-wing in the Czech Republic, delivering a film that is an effective hatchet job of that political ideology and its insidious relationship with education (or indoctrination).

The Czech Republic is rarely mentioned in the global media as a hotbed of right-wing reactionism and militarism. Unlike its near neighbors Poland, Hungary and the Ukraine, it has an image more commonly associated with the playful liberalisms of a socialism tinged with surrealism. Komrzý’s film dispels such complacent notions within its first five minutes. Here the Czech Republic is shown to be a nation hopelessly in thrall to NATO military posturing, despite left-wing protests against this foreign military presence. The support for NATO may well be explained by the paranoid fears of Russian expansionism that have been fiercely stoked by the Kremlin’s recent push into Crimea (a political possibility given some credence by Komrzý’s insertion of a Russian computer-generated demonstration of the extent of Russia’s latest military hardware).

A state Socialist legacy of military education and enforced service, known as ‘Civil Defense’ is shown to be the major catalyst for this re-emergence of right wing nationalist patriotism. Whilst the contemporary Czech politician Bohuslav Chalupa, is the figure shown to be most directly associated with this politics. It is Chalupa who is consistently attacked by Komrzý’s rather forthright senses of humor and satire. He is shown to be the most visible political proponent of the attempt to reintroduce ‘Civil Defense’, but it is within the Czech education system where the film locates the most disconcerting effects of this re-envisioning of the right.

Numerous schools are shown to promote a pro-gun policy of involving children in military practice as early as possible. Kids as young as 11 and 12 are taught how to define the word ‘weapon’, as well as being spun the cynically banal truism that “you’ll never hear a gun say I’m having a bad day, I’ll just go and shoot someone”. Teachers and spokespeople for various military bodies are captured on camera by Komrzý endorsing whole-heartedly the educative effects of handling weapons, being taught self-defense strategies and receiving regular demonstrations from fully armed military personnel. The director clearly possesses an enviable talent for putting interview subjects at ease, whilst getting them to candidly open up about some of the worst aspects of right-wing politics. So exacting are Komrzý’s interviews with the various spokespeople and representatives of the Czech military and political right, that it seems unlikely that the director will ever get another chance to have such levels of access to her damningly critiqued subjects. It is highly likely that in the future Komrzý will have to either embrace a new approach to try and circumvent those issues of lack of access, or she will simply have to make do with the diminishing returns her present approach will gradually sustain. However, it says a great deal about Komrzý as a filmmaker, that she relentlessly pursues such an approach in her debut documentary feature: to hell with the long-term consequences to her filmmaking career.

The propaganda charm offensive that is captured in the film is shown to have some disturbing affinities with the state Socialist militarism of the pre-1989 Czechoslovakia. In one hilarious and terrifying sequence, a supercilious CPD inspector revels in acquainting young children with the power of guns. Elsewhere a veteran of the Croatian War of Independence describes the “tremendous feeling marching through a defeated city”, this coming from a man who will have participated in one of the bloodiest and most violent civil wars carried out on European soil.

Frequently the film finds concrete images of just how ridiculous and absurd all of this macho posturing really is. A band of middle-aged and out-of shape men march up and down the central square of their small village, whilst on the wall in the background a dachshund barks at every call of attention and trots up and down in the exact opposite way to the militiamen. Towards the end of the movie a protracted scene in and around a Prague city center shopping mall, demonstrates the absurd and desperate lengths that the Czech military will go to in the hope of recruiting fresh blood: performing self-defense routines in a food hall, or playing badly orchestrated military versions of pop hits. So acute is Komrzý’s eye for a moment of comic absurdity, that it is hard to believe there isn’t at least some degree of contrivance in what she claims to be documenting.

There is a wealth of fascinating material in the film, from the various archive films hailing from the state Socialist past to the confrontational interviews conducted by the director herself; particularly worthy of mention here is her interrogation of an old Socialist chauvinist’s attitudes toward the military (“Give me a specific instant when you felt more like a man in the army”). Komrzý is even fairly innovative in her decision to devote a large number of interviews at the International Arms Industry Expo to those low-level employees doing the menial work around the event, rather than the slickly-schooled PR folk who man the stalls. Not only does the director put unique voices in front of the camera for the first time, but she does so in a way that manages to further undermine the validity of such events. In these Expo scenes the film dovetails nicely with the 2016 documentary Shadow World, as both films tease out the corrupting financial incentives of the arms industry.

What Teaching War lacks in subtlety and nuance it makes up for in the consistency with which it is able to land damaging satirical blows upon its major targets. When Death literally comes to thank the Arms Expo for making the mortality business that bit easier, the PR drone tooled with doling out convincing misinformation can’t even utter a coherent question. Small, powerful victories like these give the film’s message a cumulative critical weight that could add a suitable activist coda to Thomson’s theorem: if a filmmaker defines situations as real, then not only are they real in their consequences, but they are all the more real in relation to the direct countering actions they provoke.