Big Witch in a Small Classroom 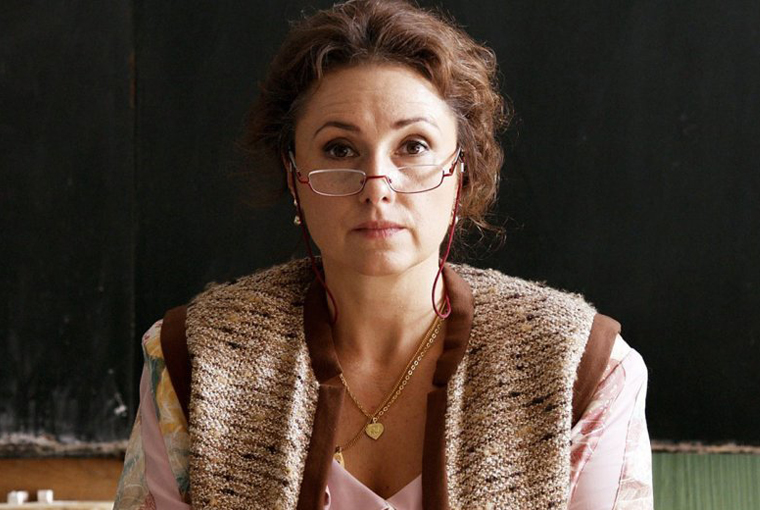 The Teacher is set where Czech and Slovak narrative art has often thrived: in the muted spaces of Socialist-era officialdom (in this case, a school) and the equally hushed, small, dully decorated apartments that force families into overbearing proximity. Czech director Jan Hřebejk’s Slovak-language film is a fresco of compromises with and small rebellions against corrupt power – but rather less typically, the film allows one monster to dominate the film. Comrade Drazdechova embodies a bureaucratic specter of Central European culture: the petty abuser of power, ruthlessly employing ideological trappings to hide selfishness and a warped desire to be loved and comforted.

On her first day at school, teacher Comrade Drazdechova – brandishing important Communist Party connections and credentials – calls roll and takes notes on the families of each student, namely their parents’ professions. Almost all of these parents will have a distinct role to play. For Drazdechova, they represent an opportunity to extort favors. Parents who repair her lamps, do her shopping, or cut her hair see their children’s grades improve, while those who fail or refuse these tasks soon learn that their children pay in the teacher’s harassment and academic downgrading. These negotiations and attempts at blackmail take place almost entirely in code. After getting a haircut from a Mrs. Bartova, Drazdechova insists smilingly on paying; Bartova, as she must, refuses. A less fortunate parent, the father of quiet Danka, fails in his absurd errand to illegally send a cake to Drazdechova’s sister in Moscow. Upon making his apologies to Drazdechova, the father stumblingly, with much prompting, offers his services as a chauffeur; the teacher responds with a simpering: “You would do that for me?” The honeyed language of coercion is universally understood, even by the children who are held hostage to their parents’ moral pliancy.

Oppressive power here is a type of customizable bullying, a set of made-to-order cruelties and humiliations adaptable to each individual. Drazdechova stands one boy, Karol Littman, in front of the class and, with poisonous compassion, tells how his mother has fled to the West and left him and his father behind. The Littmans have already been punished for the mother’s desertion. The boy’s taciturn father Václav, once a prominent astrophysicist, now works as the school janitor under constant secret surveillance. Drazdechova, a widow, nurses ill-hidden lust for him while she treats him as something between a lackey and a secret admirer. As Socialist ideology has stamped the Littmans as personae non gratae, she recognizes them as particularly vulnerable to her unctuous manipulation. The state designates their weaknesses; the individual bullies exploit them. And, as the increasingly outraged parents learned, fighting back is useless without sufficient numbers.

Drazdechova’s monstrous femininity recalls some of Kundera’s overwrought women, Růžena from The Farewell Waltz and Helena Zemánková from The Joke, for example. Kundera’s horror of the body – and, by implication, aging and maternity – does not really translate to Hřebejk’s film, but neither does his sympathy for women taught to be dependent on men. A childless widow who assumes the role of evil fairy-tale stepmother to other people’s offspring, Drazdechova is a classic anti-mother who doesn’t truly need anyone. Her terrifying selfishness makes her resilient to changes of regime and situation – as the film’s clever and pessimistic epilogue, taking place post-1989, makes clear.